Will Trump comply with Jan. 6 committee subpoena? What’s next after Thursday’s hearing 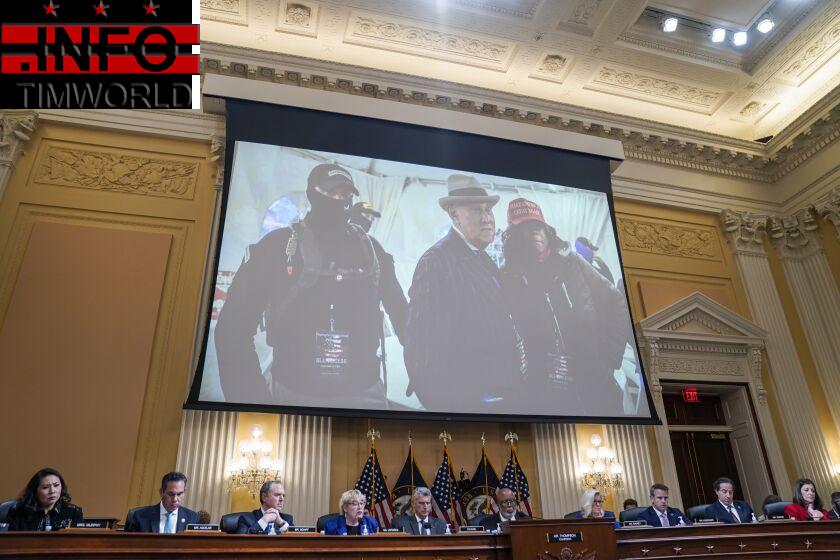 After closing out what could be the final installment in a series of high-profile hearings, the House’s Jan. 6 select committee is left with decisions to make in its remaining weeks that could have profound effects for years to come.

The committee will need to square whether it will play a role in the Justice Department’s investigation and determine how the raw information it has collected will be preserved and disseminated. But ultimately the panel’s largest decisions will be about what recommendations to make and what information its final report should contain.

Republican leaders had fought the creation of an independent commission to review the Jan. 6, 2021, attack on the Capitol and what led to it. The House panel is the only government entity tasked with the inquiry, and is compiling what is expected to be the definitive historical record of what led to the insurrection.

What the committee produces is likely to become the bedrock evidence in criminal and civil cases, and will be examined by historians and studied in schools much like the 9/11 commission report has been, said Grant Tudor, a policy advocate for Protect Democracy.

“These types of evidence-gathering and truth-telling exercises have ramifications for other accountability efforts long after they’re done,” Tudor said.

Prosecutors, journalists and government watchdog groups are clamoring for access to the more than 1,000 depositions, hundreds of hours of video and hundreds of thousands of pages of documents collected in the investigation. The committee has been guarded about how much material might be made public.

“While we’re obviously anticipating this final report, that’s not the same as anticipating access to the vast body of evidence that’s gathered and the analysis of that evidence,” Tudor said. “It seems really likely that it’s going to take a pretty intentional editing hand in deciding what to include and what not to include. The committee has collected this staggering volume of records and troves of witness testimonies.”

The report is all but certain to provide more detail than was possible in a hearing format.

Despite early signals of what the panel intended to scrutinize, such as who was behind fundraising for the rally where then-President Trump spoke before the attack, the committee ultimately focused on Trump’s role in the events and his mindset around Jan. 6, pushing some issues to the back burner. Topics raised in hearings were often not completely followed.

The committee’s hearings barely touched on information it had gathered on several topics key to understanding the events on and around Jan. 6, including what failures in law enforcement intelligence gathering allowed the insurrection to happen, who funded efforts to find evidence of fraud in the election, and who paid for some Trump supporters to travel to Washington to march on the Capitol.

“There is potentially a huge wealth of evidence that could be coming,” Debra Perlin, policy director at Citizens for Responsibility and Ethics in Washington, told reporters Friday.

Along with an account of the plans to keep Trump in power that led to the violence on Jan. 6, the report is expected to include recommendations for legislation or action by federal agencies, and possibly by state and local governments.

But the potential outcome most are watching for is whether the committee will recommend criminal charges against Trump or others.

Its members have been divided on whether it is appropriate to recommend criminal charges to the Justice Department, or whether the panel should refrain from doing so to prevent the potential appearance of politicizing a decision that the department is supposed to make based on facts alone. The panel has so far held itself apart from the efforts of prosecutors, including refusing requests to share depositions and other evidence with them.

“We think we very, very much proved the case in a compelling way by the end of that hearing series,” Rep. Adam Kinzinger (R-Ill.) told Politico. “And now, frankly, on the criminal side, because we’re not the criminal committee, it’s up to the [Justice Department]. … They have the torch, and we’ll see where they go with it.”

Committee Vice Chair Liz Cheney (R-Wyo.) said at Thursday’s hearing that criminal referrals for multiple individuals were likely, but did not elaborate.

In the spring and summer, members of the House committee publicly criticized U.S. Atty. Gen. Merrick Garland, saying he was moving tentatively compared with their proceedings. But the Justice Department made increasingly aggressive moves over the summer, and appears to be conducting multiple investigations at once.

Agents have seized cellphones, brought dozens of high-ranking Trump confidants before a grand jury and conducted court-approved searches of private homes, including executing a warrant at the home of former Justice Department official Jeffrey Clark, whom they left handcuffed outside without pants.

The department has been careful not to indicate whether indictments are coming, and traditionally it doesn’t make moves in the weeks before an election so as not to potentially influence the outcome. Many legal experts have expressed confidence that charges will come after the midterm elections next month.

Duke University professor Asher Hildebrand, a former high-ranking Capitol Hill staffer, said regardless of whether a criminal referral comes from the committee, the hearings show the panel has done its job.

“It does feel like the Jan. 6 committee’s contribution to the broader consideration of what happened on Jan. 6, and leading up to it, what crimes were committed by the president … that contribution is sort of secure. And that, at this point, is really a question of whether, when and how the Justice Department and other law enforcement authorities act on all of this information,” he said.

As the report is poised to assume center stage, the committee’s investigation is ongoing. On Thursday, its members voted unanimously to subpoena Trump for documents and testimony, saying he has an obligation to answer for his actions.

In a rambling 14-page response Friday, Trump didn’t commit to an interview or to sharing documents. Instead he reiterated baseless claims of election fraud and shared photos of the crowd at his rally that day.

“You have not gone after the people that created the fraud, but rather great American patriots who questioned it, as is their constitutional right,” he wrote. “These people have had their lives ruined as your committee sits back and basks in the glow.”

Trump is likely to fight the subpoena, or ignore it completely. With just more than two months left before the committee is set to disband, it will need to decide how much time to spend pushing for Trump to comply, or whether to consider the subpoena to be largely symbolic.

The panel will also need to determine which ongoing fights for records and testimony are still worth pursuing. More than a dozen witnesses have sued to block the committee from gaining access to cellphone or email records, and others are fighting subpoenas to testify in court. Some of the cases have been ongoing for more than a year, in part because the committee has sought more time to craft a strategy.

How the committee will present its final report is unclear. All that is required to issue it is a vote of its members, but after nine carefully orchestrated hearings this year, a visual presentation of some kind is expected.

“It seems unlikely that it will just drop a large bound book and not say anything about it or not use it as a public platform to also make a series of closing arguments,” Tudor said. “Even if it’s out of the context of a formal hearing.”