Who is Danny Bakewell, the Black L.A. power broker named in the Nury Martinez audio? 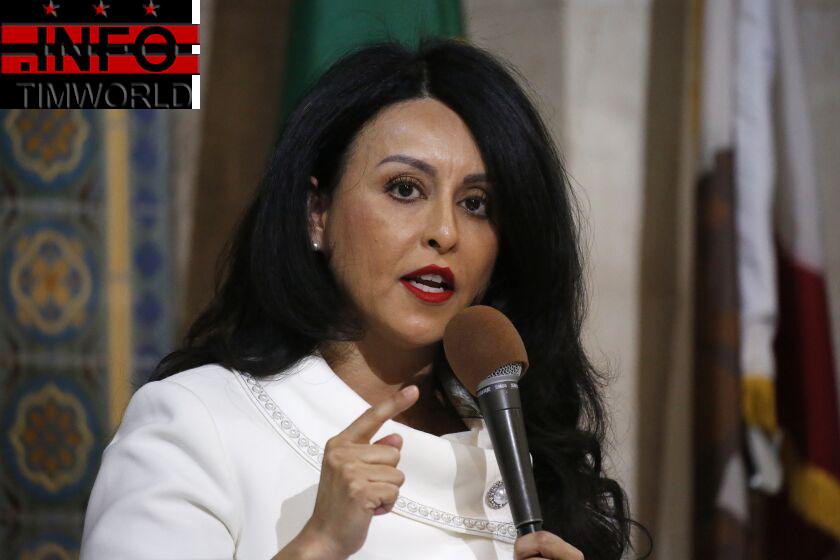 “Everything he touches has made an impact in our community,” said Jay Conedy, 60, from beneath a towering poster of Bakewell Sr. giving a thumbs-up.

“He’s synonymous with the area,” added Yolanda Duvernay, 71, as she wandered Crenshaw Boulevard.

Indeed, nods to Bakewell, 76, filled Taste of Soul, the businessman’s beloved Black cultural festival, this weekend. Amid R&B performances and Cajun food trucks, his name was everywhere from the video screens lining the event’s main thoroughfare to the Bakewell Media Music Stage demarcating its southernmost end.

The celebration was a substantially less controversial venue than the last major place Bakewell’s name showed up: on the lips of now-former City Council President Nury Martinez, who — accompanied by three other Latino leaders — was recently caught on tape making racist and derisive comments about her colleagues and others.

Yet relatively unexamined in the maelstrom has been Martinez’s brief references to Bakewell, a high-profile leader among Black Angelenos, real estate developer and the executive publisher and owner of the Los Angeles Sentinel, the long-running Black newspaper.

In the leaked tape, Martinez claims she spoke with Bakewell about a redistricting dispute between two other councilmembers — Curren Price and Marqueece Harris-Dawson, both Black and representing parts of South L.A. — over who should represent USC and Exposition Park.

If Harris-Dawson wanted a high-profile asset for his district, Martinez said she advised Bakewell, the councilmember should try to take Los Angeles International Airport.

“I told Danny, if you want to cut a deal … I would go after the airport,” Martinez can be heard saying in the leaked tape. “He goes, ‘F—, I love that idea.’”

Bakewell confirmed to The Times that he did talk to Martinez over the phone, but added that a year out from their talk, he didn’t remember all the details.

“While there seems to be a lot of discussion about who should get USC, I think I said — if I can recall — ‘leave USC in Curren’s district and give Marqueece the airport,’” he said. “That’s a great asset; nobody would turn down that asset. And that alleviates a fight in the Black community and allows us to move on gaining assets, as opposed to fighting over one asset.”

Bakewell added: “That was the sum total of my comment to her.”

For those less familiar with Bakewell’s influence, the parts of the tape which reference him may seem like incongruous tangents — and are certainly less inflammatory than other moments, including those wherein Martinez describes her colleague Mike Bonin’s son as monkey-like or seems to mock Oaxacans.

Why, after all, would the founder of a food festival and publisher of a local paper get looped in on top-level discussions about how the city’s political power is arranged?

For those who know Bakewell and the power he wields, it’s no mystery at all.

“Danny is a respected person, not only by the community but by the political infrastructure that exists in California,” said Robert Sausedo, the president and CEO of Community Build, a nonprofit focused on economic development in South L.A.

“African Americans haven’t always had a seat at the table; we’ve more so been on the menu,” Sausedo added. “Danny’s good fight has been about making sure that people have a place at the table.”

Bakewell enjoys behind-the-scenes influence among city leaders. He maintains “a wealth of relationships” through the Sentinel and his other business endeavors, including the Taste of Soul festival, said Najee Ali, a longtime city activist.

“Everyone knows Danny Bakewell in Black Los Angeles,” Ali said. “The older generation, we know and remember Danny as being essentially a kingmaker. I wasn’t surprised his name got mentioned on that tape at all.”

Indeed, it isn’t out of character for Bakewell to have consulted on the redistricting debate. He played a similar advisory role in 2018 when Mayor Eric Garcetti was trying to decide who should be the city’s next police chief.

The city of L.A. has long been a financial supporter of the festival’s programs. The city, along with L.A. County, are among those listed as sponsors for this year’s event on the festival website.

“He is a street fighter who has become a publisher, a businessman, an educator and a de facto politician of great substance,” the Rev. Jesse Jackson says at one point.

“That is one of the roles that I play,” he said, “and I am honored and compelled to be in that position.”

Bakewell bought the Los Angeles Sentinel in 2004 and — with a mission to cover South-Central in a way that other local media wasn’t — became its chairman and executive publisher. At one point he served as the chair of the National Newspaper Publishers Assn., a trade association for Black-owned newspapers.

The Sentinel’s website says the paper has a readership of 150,000, making it the largest subscriber-paid, Black-owned newspaper on the West Coast, and that it “significantly influences [its readers’] perceptions, attitudes and buying decisions.”

It’s not out of the ordinary for someone in Bakewell’s position to hold broader sway than just running a newspaper, some experts say.

Owners of Black newspapers have historically been “privy to the inner workings of whoever happens to be in power,” said Earnest Perry, the associate dean for graduate studies and research at the Missouri School of Journalism. It wouldn’t be unusual for someone in that position to serve as a sounding board for local politicians around questions of import to Black readers, he added.

Not everyone agreed. Danielle Brown — a professor of journalism, diversity and equality at the University of Minnesota — said it would be unusual for the publisher of a Black newspaper to be meeting with politicians and directly informing policy.

Some critics have argued that Bakewell uses the Sentinel to boost politicians who align with his goals.

Yet Bakewell’s status as an informal power broker extends well beyond his work as a publisher; he also boasts a long history as a civil rights leader and advocate for Black empowerment.

From humble origins in New Orleans, Bakewell moved to Los Angeles in the ‘60s and became involved with community organizing, including with the Brotherhood Crusade — a community nonprofit focused on equity in South L.A. that Bakewell became president and CEO of in 1973 (he still sits on the board).

From there followed a series of social justice efforts, many of which captured national attention.

In 1991, not long after LAPD officers brutally beat Rodney King, Bakewell led protests over two different incidents in which a Korean grocer fatally shot a Black teen. He organized efforts in 1993 to get the Tournament of Roses to diversify its all-white, all-male executive committee; co-chaired the L.A. headquarters of the 1995 Million Man March; and was a vocal supporter of O.J. Simpson during Simpson’s murder trial that same year. In 1997, he led efforts to get train tracks in South L.A. cleaned up, and in 1999 he protested in Riverside after the county’s district attorney cleared of criminal wrongdoing four police officers who’d killed 19-year-old Tyisha Miller.

“He’s very good at building coalitions, bringing people together,” said Michael Lawson, president and CEO of the Los Angeles Urban League. “He has the ability to call on senior elected officials and demand that they meet with the groups that he has put together, be they clergy or community organizers or a combination.”

“He uses that bully pulpit to the advantage of the African American community,” Lawson continued, adding that Martinez’s references to Bakewell did not surprise him.

As the founder of his eponymous real estate firm, the Bakewell Co., Bakewell is also a prominent L.A. developer. He’s been involved in various development projects across the region for decades, from a shopping center in Pasadena to an apartment complex in South Park. The Sentinel has described the Bakewell Co. as “one of the most successful privately-held African American real estate development firms in the nation” and claims the firm has “built, owned and managed more than four million square feet of commercial, industrial and residential property throughout California.”

Some of Bakewell’s developments have prompted criticism. In something of a reversal of his usual activist orientation, Bakewell was once subject to protests by the Compton branch of the NAACP over a rent dispute with the owner of a restaurant in one of his shopping centers. Curbed L.A. reported that he was $3.1 million in debt to the city of Compton at one point “for development loans and land.”

Bakewell told The Times that he heard about the leaked City Council tape at the same time as everyone else, reflecting statements he’s published through the Sentinel. (On Oct. 9, Bakewell wrote that he hadn’t heard any of Martinez’s comments — but that if she did say what was being alleged, it was “indefensible.” The next day he issued a second statement calling the statements racist and demanded that all four leaders implicated in the tape resign.)

“But when I went back and I listened to it,” he added, “you can’t deny what you hear.”