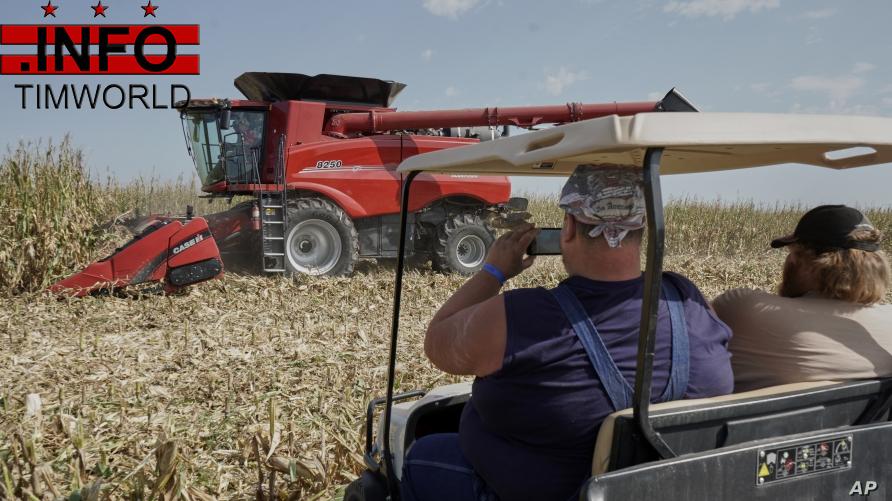 DECATUR, ILL. – In the world of agriculture, there is often a dividing line marked by color — red and green — which on a farm, doesn’t mean “stop” or “go.”

“Just like you might be accustomed to Ford or Chevy, on the farm, it’s either Case or John Deere,” said farmer Megan Dwyer of Colona, Illinois, whose family falls firmly in the red camp and uses Case tractors, even though they farm near the Moline headquarters of John Deere, manufacturer of the iconic green equipment.

“We bleed red and have red on the farm,” Dwyer said. “It’s all I’ve ever known.”

Some of the Case machinery Dwyer’s family purchased in the 1970s is older than she is and still in use today. She admits they could use new equipment, but being able to afford it is another matter.

“There’s not really money there to do it. We’re operating at a loss right now,” she said.

WATCH: US Farmers Put Off Equipment Purchases Amid Trade War

Farmers in America face their fifth consecutive year of below-average income, a situation compounded by the ongoing trade dispute with China.

U.S. tariffs have raised prices on imported aluminum and steel, increasing the cost to manufacture farm equipment in the United States, such as tractors and combines. Retaliatory tariffs by China have decreased demand and overall prices for crops like soybeans, ultimately affecting a farmer’s bottom line, forcing many to hold off purchasing large, expensive equipment.

“They are luxuries today,” Dwyer said. “Lenders, bankers, they want to see something that’s profitable and makes sense, and these big equipment purchases don’t do that.”

CNH Industrial, the Europe-based parent company of Case IH (International Harvester), is the second-largest manufacturer of machinery in the United States behind John Deere. Both companies face withering demand from farmers for their new products, with sales of large tractors down nearly 50% from 2013, the year after a major drought.

John Deere has cut its earnings forecast several times this year. The company says it is looking to cut costs and will decrease production at its Illinois and Iowa facilities, mostly of large tractors, by 20%.

“I think we’ve weathered storms that are worse than this, and we’ve also been in times that are better than this,” said Laurel Caes, public relations manager with John Deere. “It just all ebbs and flows with agriculture, and it’s just managing what we can and hearing that feedback from the customer on what we can do to enable them to be better farmers, better stewards of the land and be as profitable as they can be whether the times are good or bad.

“We’re always taking a pulse in what the customers are feeling, their pinch points, and we’re trying to address that as best we can with our equipment and technology,” she added.

A Case combine gets ready for a corn harvesting demonstration under a giant flag, at the Husker Harvest Days farm show in Grand Island, Neb., Sept. 10, 2019.

Caes said there are other options for farmers reluctant to make big equipment purchases as the trade war marches on.

“We also offer a lot of performance upgrades. So, if you can’t or don’t want to get a new piece of equipment, we have that opportunity to upgrade what you have to use that new technology. I think that technology is where customers show interest as we weather the times, good and bad,” she said.

The U.S. Department of Agriculture reports the nation’s farm sector is more than $426 billion in debt. According to the American Farm Bureau Federation, farm bankruptcies are on the rise in most parts of the U.S., with delinquencies on commercial agricultural loans at six-year highs.

While technology upgrades might not be as expensive as new equipment purchases, it is also a cost investment, and many farmers might need to finance such purchases.

“I think there are more important things to put my money to on the farm today,” Dwyer said.

She added that she’ll stick with repairing her old Case tractors, regardless of their age, until she sees a break in the trade storm that continues to cast clouds of doubt on her profits, and the overall farm economy.

Fed seen delivering a 75-basis point hike next week, with more to come The Federal Reserve is seen delivering a third straight 75-basis point interest rate hike next week after a government report showed that consumer prices did not ease as expected in August, meaning more work ahead for the central bank as it fights decades-high inflation
Oregon teachers walk out in red to press for school funding
E.U. Barring U.S. Visitors Would be a ‘Huge Deal’ for Airlines