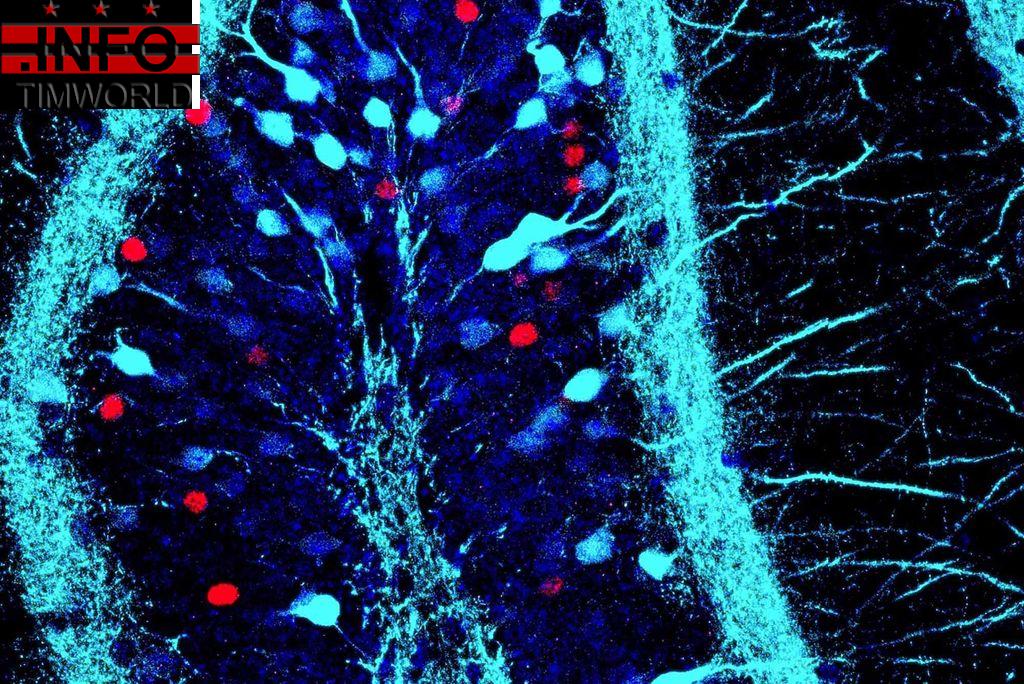 It might be hard to believe, but this is a picture of a memory. In this image, the blue dots are positive memory cells, and the red dots are negative memory cells. Memories exist in the brain as networks of cells called engrams, and are stored and processed all over the brain. The memories shown here are located in the hippocampus of a mouse. Credit: Photo by Stephanie Grella

Neuroscientists show that it’s possible to turn the volume down on a negative memory by stimulating other, happier ones.

Even though you may not realize it, each time you recall a memory—such as your first time riding a bike or walking into your high school prom—your brain changes the memory ever so slightly. It’s almost like adding an Instagram filter, with details being filled in and information being updated or lost with each recall.

“We’re inadvertently applying filters to our past experiences,” says Steve Ramirez (CAS’10), a Boston University (BU) neuroscientist. Even though a filtered memory is different from the original, for the most part, you can tell what that basic picture is, he says.

“Memory is less of a video recording of the past, and more reconstructive,” says Ramirez, a BU College of Arts & Sciences assistant professor of psychological and brain sciences. It is both a blessing and a curse that memory is malleable in nature. If we remember false details, it is bad. However, especially for memories of something scary or traumatic, it’s good that our brains have the natural ability to mold and update memories to make them less potent.

What if it’s possible to use the malleable nature of our memories to our advantage, as a way to cure mental health disorders like depression and post-traumatic stress disorder (

“Our million-dollar idea is, what if a solution for some of these mental disorders already exists in the brain? And what if memory is one way of getting there?” Ramirez asks. In two new scientific papers, he and his team demonstrate the power of our emotional memories and how our experiences—and the way we process them—leave actual physical footprints on the brain.

One of the most important steps toward using memory to treat memory-related disorders is understanding where positive and negative memories exist in the brain, and how to distinguish between the two. Memories are stored in all different areas across the brain, and the individual memories themselves exist as networks of cells called engrams. Ramirez’s lab is particularly interested in the networks of memories located in the brain’s hippocampus, a cashew-shaped structure that stores sensory and emotional information important for forming and retrieving memories.

The term “engram” was coined in 1904 by memory researcher Richard Semon. An engram is a unit of cognitive information imprinted in a physical substance, theorized to be the means by which memories are stored as biophysical or biochemical changes in the brain or other biological tissue, in response to external stimuli.

In a new paper published in BU’s Center for Systems Neuroscience.

The study authors found that positive and negative memory cells are different from each other in almost every way—they are mostly stored in different regions of the hippocampus, they communicate with other cells using different types of pathways, and the molecular machinery in both types of cells seems to be distinct.

“So, there’s [potentially] a molecular basis for differentiating between positive and negative memories in the brain,” Ramirez says. “We now have a bunch of markers that we know differentiate positive from negative in the hippocampus.”

Seeing and labeling positive and negative memories is only possible with the use of an advanced neuroscience tool, called optogenetics. This is a way to trick brain cell receptors to respond to light—researchers shine a harmless laser light into the brain to turn on cells that have been given a receptor that responds to light. They can also color-code positive and negative memories by inserting a fluorescent protein that is stimulated by light, so that positive memory cell networks glow green, for example, and negative cell networks glow red or blue.

In this image, the red cells are a fear memory. After artificially activating another, more pleasant memory, those red cells turned into the blue cells, which represent the altered, less powerful fear memory. This demonstrates that the original memory has been altered by their memory manipulation technique, according to lead study author Stephanie Grella. Credit: Photo by Stephanie Grella

Before the researchers label a memory in a mouse, they first have to make the memory. To do this, they expose the rodents to a universally good or unpleasant experience—a positive experience could be nibbling on some tasty cheese or socializing with other mice; a negative experience could be receiving a mild but surprising electrical shock to the feet. Once a new memory is formed, the scientists can find the network of cells that hold on to that experience, and have them glow a certain color.

Once they can see the memory, researchers can use laser light to artificially activate those memory cells—and, as Ramirez’s team has also discovered, rewrite the negative memories. In a paper published in Nature Communications, they found that artificial activation of a positive experience permanently rewrote a negative experience, dialing the emotional intensity of the bad memory down.

The researchers had the mice recall a negative experience, and during the fear memory recall, they artificially reactivated a group of positive memory cells. The competing positive memory, according to the paper, updated the fear memory, reducing the fear response at the time and long after the memory was activated. The study builds on previous work from Ramirez’s lab that found it’s possible to artificially manipulate past memories.

“If you stimulate a lot of cells not necessarily tied to any type of memory, that can cause enough interference to disrupt the fear memory,” says Stephanie Grella, lead author and a former postdoctoral fellow in the Ramirez Lab who recently started the Memory & Neuromodulatory Mechanisms Lab at Loyola University.

She suggests that it could be possible to override the impacts of a negative memory, one that has affected a person’s mental state, by having a person recall the bad memory, and correctly timing a vivid recall of a positive one in a therapeutic setting.

“We know that memories are malleable,” Grella says. “??One of the things that we found in this paper was that the timing of the stimulation was really critical.”

The Quest for Game Changers

For other, more intensive types of treatment for severe depression and PTSD, Grella suggests that it could eventually be possible to stimulate large swaths of the hippocampus with tools like transcranial magnetic stimulation or deep brain stimulation—an invasive procedure—to help people overcome these memory-related disorders. Ramirez points out that more and more neuroscientists have started to embrace experimental treatments involving psychedelics and illicit drugs. For example, a 2021 study found that controlled doses of MDMA helped relieve some severe PTSD symptoms.

“The theme here is using some aspects of reward and positivity to rewrite the negative components of our past,” Ramirez says. “It’s analogous to what we’re doing in rodents, except in humans—we artificially activated positive memories in rodents, and in humans, what they did was give them small doses of MDMA to see if that could be enough to rewrite some of the traumatic components of that experience.” These types of experiments point to the importance of continuing to explore the clinical and beneficial methods of memory manipulation, but it’s important to note that these experiments were done under close medical supervision and shouldn’t be attempted at home.

For now, Ramirez is excited to see how this work can further push the boundaries in neuroscience, and hopes to see researchers experiment with even more out-of-the-box ideas that can transform medicine in the future: “We want game changers, right?” he says. “We want things that are going to be way more effective than the currently available treatment options.

This work was supported by the National Institutes of Health.