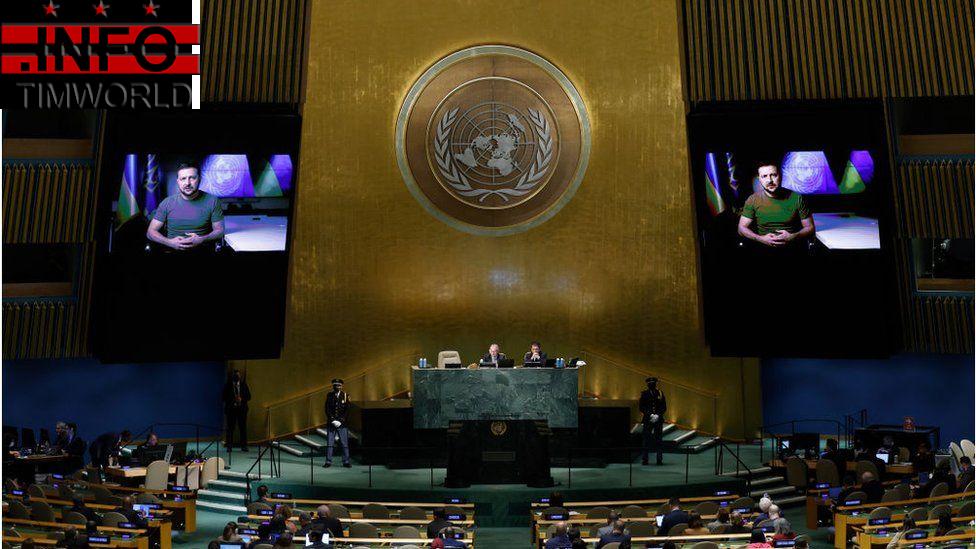 Russia must face “just punishment” over its invasion of Ukraine, President Volodymyr Zelensky has told the UN General Assembly in New York.

In a pre-recorded video, the Ukrainian leader called for the creation of a special war tribunal and detailed alleged war crimes by Russia.

He also set out a peace “formula”, including more military support and to punish Russia on the world stage.

His address received a standing ovation from many of the session’s attendees.

In his introductory remarks, Mr Zelensky accused Russia of causing “catastrophic turbulence” with its “illegal war”.

He spoke on the same day Russian President Vladimir Putin called up 300,000 military reservists for duty, a move which prompted rare protests on the streets of Russia.

Mr Zelensky said the move showed his enemy was not serious about peace talks.

He condemned recently-announced plans in Russian-occupied areas of his country to hold so-called referendums on joining Russia – a plan denounced by Western leaders at the UN on Tuesday.

He addressed the discovery of 445 new graves in Izyum, a north-eastern city recently retaken from Russian forces during a sweeping Ukrainian counter-offensive.

Mr Zelensky detailed allegations of war crimes in the city, including against one man said to have been castrated and murdered.

“Why are the Russian military so obsessed with castration?” he asked.

The word “punishment” cropped up some 15 times in Mr Zelensky’s speech, and was the first of his five non-negotiable conditions for peace.

Russia must face consequences for its aggression, he said, through further sanctions against individuals and by the UN stripping Moscow of its powerful role as a permanent Security Council member.

He also called for Ukrainian lives to be protected, and for the country’s internationally-recognised borders to be respected.

As his fourth and fifth conditions, he called for new security guarantees for Kyiv, and for the world to unite in calling out Moscow’s armed aggression.

Sporting his signature green t-shirt, the Ukrainian leader thanked the 101 countries at the UN which voted to allow him to address the assembly in a video rather than in person.

He blasted the seven countries including Russia which voted against his video appearance, and criticised those which have remained neutral during the conflict.

Despite Mr Zelensky’s suggestion that Russia was not serious about negotiations, the two nations did complete a major exchange of prisoners of war on Wednesday.

215 fighters were returned to the Ukrainian side, including 10 foreigners – while Russia received 55 soldiers and the pro-Russian politician Viktor Medvechuk, who faced treason charges in Ukraine.