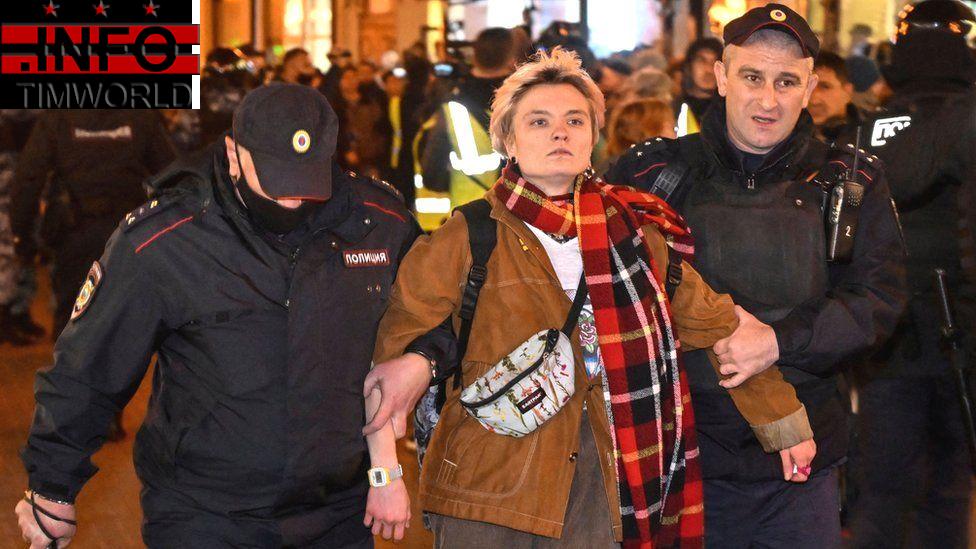 In the centre of the Lithuanian capital Vilnius, a large banner is taped to a tall building, above a Ukrainian flag, that reads: “Putin, the Hague is waiting for you.”

On city buses, electronic displays flick between announcing their destination and declaring “love” for Ukraine with little hearts.

This week Lithuania – together with Latvia, Estonia and Poland – banned all Russian tourists, arguing they should not be enjoying democracy and freedom in Europe while their government attacks those very values in Ukraine.

“It’s strange to ban people for being Russian, whether or not they support Putin’s regime,” argues Anastasia Shevchenko, an activist who spent two years under house arrest for protesting against the Russian president.

When Russia invaded its neighbour, she was serving a suspended sentence and one wrong move, even an anti-war comment, could have put her behind bars.

But Anastasia could not bear to be silenced, so she squeezed her family’s life into a couple of cases and they fled in the middle of the night for Lithuania.

“What is going on in Russia now is like total fear,” Anastasia tells me, in Vilnius. “So many people are frightened because we know they can do anything. It’s not only prison, or fines: you can be killed or poisoned. It’s like a huge prison. All the country.”

Since we spoke, Vladimir Putin has declared a partial mobilisation of Russian reservists – the first real test of support for his invasion. The early signs do not look good.

Protesters came out in several cities shouting “no to war!” and even “Putin to the trenches!”. More than a thousand people were detained and some were then served with call-up papers at the police station.

But even more Russians are heading for the border by any route left to them.

While queues to enter Finland are growing, Latvia and Estonia both say escaping enlistment is not grounds for asylum. Lithuania will consider cases individually, but the prime minister clarified that it was “not the duty of other countries to save Russians fleeing mobilisation”.

Image caption, A building in central Vilnius, Lithuania, displays an anti-Putin message above the Ukrainian flag

Ukrainians have no sympathy with those now protesting against the draft, if those same people did not come out against the killing of Ukrainian civilians.

Some see even the most persecuted Russian activists as cowards, because the risk they face for resisting President Putin is nothing compared to being bombarded by his military.

Those activists, however, insist that it is not that simple.

“Of course, we feel this responsibility. We should have used the opportunity to change our country,” former opposition MP Dmitry Gudkov accepts.

“Putin is a war criminal, he is killing people. But how can Russians inside Russia stop Putin? It’s not possible.”

Mr Gudkov left Moscow well before the war, saying he was warned to go – or go to jail. Today, all prominent Russian opposition figures are either in custody, dead or in exile.

So at a recent gathering in Vilnius, a slogan on stage called on those abroad to “be brave, like Ukraine”, but the mood was subdued with a hint of helplessness.

Many are actually now looking to Ukraine to do what they could not achieve peacefully inside Russia: defeat Putin.

“I think the West should ramp-up military assistance to Ukraine, that’s the only option,” Mr Gudkov says.

Alexei Navalny’s team agree, but go further. Since the opposition politician was imprisoned, dozens of his team have moved to Vilnius to escape prosecution as “extremists” themselves.

“Putin committed his gravest mistake when he invaded Ukraine. I believe he dramatically decreased the duration of his reign,” Mr Navalny’s right-hand man, Leonid Volkov, tells me.

This week’s call-up has confirmed that belief, as videos of men saying tearful goodbyes to their families pop up all over the country.

“No-one attacked Russia, no-one needed these separations and these deaths,” Mr Volkov wrote on Twitter. “But on 24 February, a maniac led his country down a dead-end.”

Mr Navalny’s team have been trying to undermine support for the war via YouTube. The audience for their shows, made in Vilnius, has doubled since the invasion.

They are also pushing for more Western sanctions – not visa bans against a whole nation.

They want Ukraine’s allies to look beyond President Putin’s near-circle and sanction those whom Mr Volkov calls “war enablers” – a list of over 6,000 names, from judges to state journalists.

“Our call to Western governments is to sanction all those people and present them with an exit strategy: tell them what they have to do to get off the list,” Mr Volkov says.

“This will create splits. Many will start to jump ship, and Putin’s system can’t work without them,” he adds.

Image source, EPAImage caption, In a televised address this week, Vladimir Putin said he was calling up thousands of extra troops to fight in Ukraine

Russian troops have since been forced into retreat from large areas of Ukraine and President Putin has responded as usual: by escalating.

As well as the call-up, there is his threat of annexing more Ukrainian land and another nuclear warning for the West.

Russia’s president has staked a huge amount on this campaign and things could well get much worse.

That leaves activist Anastasia Shevchenko struggling with a sense of guilt that she could not do more to stop him.

“I blame myself and it’s not a good feeling, believe me,” she admits.

But her decision to leave Russia was sealed when her son had to write a letter at his primary school to the soldiers, wishing them victory.

Instead, he told them they had no right to fight their neighbours.

“I think all we can do now as Russians is say sorry – and protest against Vladimir Putin,” Anastasia says. “Because Putin personally is the reason for what’s going on. Why so many people are dying.”