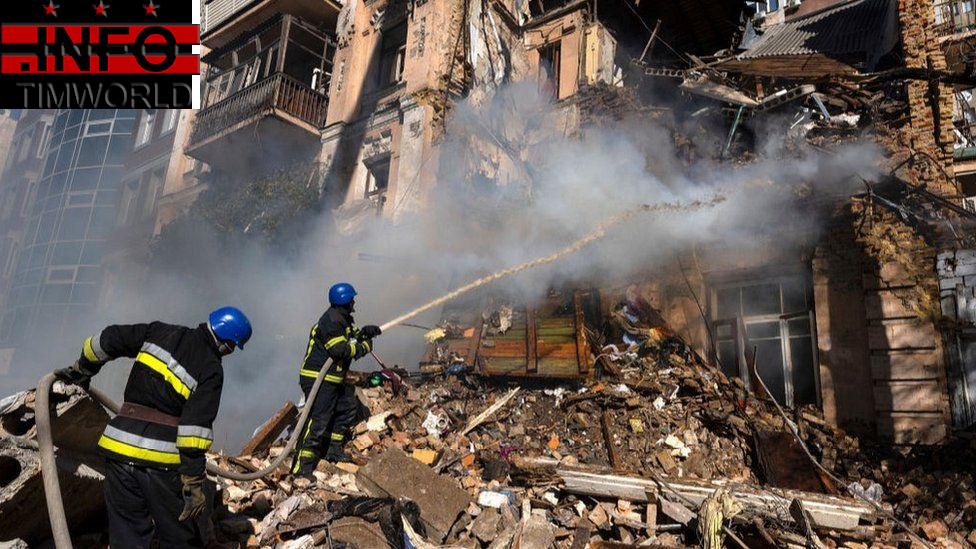 Kyiv was struck by so-called “kamikaze” drones on Monday, unleashed by Russia but believed to be Iranian-made.

The US agrees with the French and British assessment that the drones violate UN Security Council Resolution 2231, the US State Department said.

Ukraine has identified the drones – or unmanned aerial vehicles (UAVs) – as Iranian Shahed-136 weapons. They are called kamikaze drones after the Japanese fighter pilots who flew suicide missions in World War Two.

“It is our belief that these UAVs that were transferred from Iran to Russia and used by Russia in Ukraine are among the weapons that would remain embargoed under 2231,” said Vedant Patel of the state department.

Iran denies supplying them to Russia, but Mr Patel said the US “exposed publicly that Russia has received drones from Iran, that this was part of Russia’s plan to import hundreds of Iranian UAVs of various types”.

He added that there was “extensive proof” of Russia’s use of them in Ukraine.

Critical infrastructure was hit on Monday in Ukraine’s Kyiv, Dnipro and Sumy regions, with electricity cut in hundreds of towns and villages, the Kyiv government said.

At least eight people were killed – four in Kyiv and four in Sumy. The US said it would “hold [Russia} accountable for its war crimes.”

Mr Patel said the deepening alliance between Russia and Iran was something the whole world should see as a threat. Russia and Iran have provided key military support for President Bashar al-Assad in the Syrian civil war.

“Anyone doing business with Iran, that can have any link to UAVs or ballistic missile developments or the flow of arms from Iran to Russia, should be very careful and do their due diligence. The US will not hesitate to use sanctions,” Mr Patel warned.

Monday’s attack came a week after Russia fired dozens of missiles at Kyiv and other Ukrainian cities, many of them targeting energy infrastructure. Western analysts believe the Iranian weapon is helping Russia to keep up long-range attacks despite a shortage of precision missiles.

EU foreign policy chief Josep Borrell says the EU is also “gathering evidence” on the Iranian drones and is ready to act – implying a possible intensification of sanctions.

Negotiations to revive the 2015 nuclear deal with Iran are currently stalled. Under the deal with Western powers, Iran agreed to limit its sensitive nuclear activities and allow in international inspectors in return for the lifting of crippling economic sanctions.

What are ‘kamikaze drones’?

Believed to include an Iranian-supplied weapon called the Shahed-136These drones loiter above a target before attackingPacked with explosives which detonate upon impact, destroying the droneOften sent in waves and difficult to spot on radarThe US said Iran planned to send hundreds to Russia, costing just $20,000 (£17,800) eachUkraine has also used ‘kamikaze drones’ – including the US-made Switchblade model