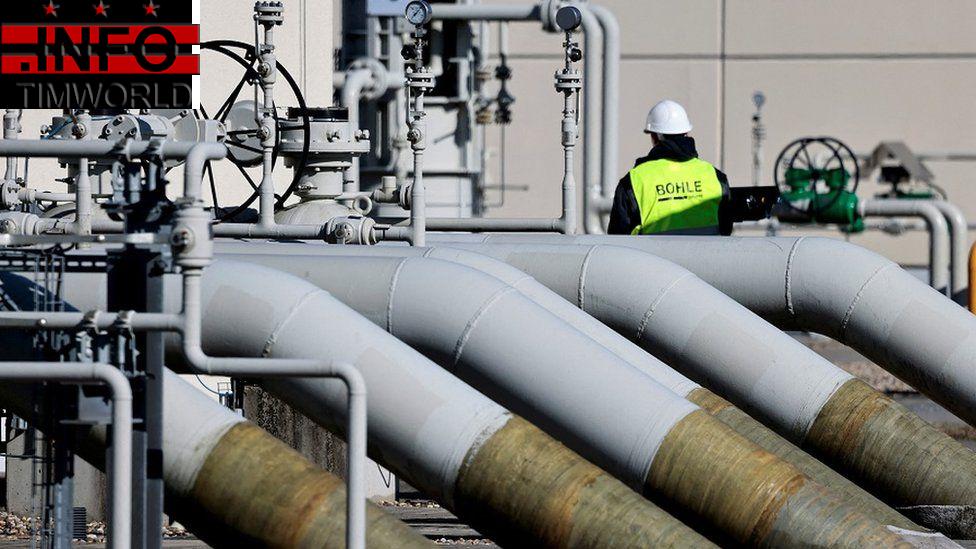 Ukraine has accused Moscow of waging a “gas war” against Europe and cutting supplies to inflict “terror” on people.

Russian energy firm Gazprom announced it is once again reducing gas flows into Germany to allow work on a turbine on the Nord Stream 1 pipeline.

But Ukraine’s President Volodymyr Zelensky said this was simply “gas blackmail” against Europe.

The Nord Stream 1 pipeline, which pumps gas from Russia to Germany, has been running well below capacity for weeks.

Earlier this month, Russia’s biggest European pipeline was completely shut down for a 10-day maintenance break, sparking fears in Europe that shipments would not resume at all.

Shipments did restart five days ago – albeit still at a reduced capacity. But on Monday, Gazprom announced it would be cutting its gas supply further once again.

This time, it said it needed to cut gas supply to around half of current levels in order to carry out maintenance work. The German government, however, said there was no technical reason for it to limit the supply.

“The gas blackmail of Europe, which only gets worse every month, is needed by a terrorist state to make the life of every European worse,” said Mr Zelensky in his nightly address.

He said it was deliberately intended to make it difficult for Europe to prepare for winter, without any care for the poverty people may suffer in the colder months as a result.

The EU, which received 40% of its gas from Russia last year, has also accused Russia of using energy as a weapon.

The latest reduction in flows puts pressure on EU countries to reduce their dependence on Russian gas even further, and will likely make it more difficult for them to replenish their gas supplies ahead of winter.

European energy ministers are meeting in Brussels on Tuesday where they hope to sign off on a joint response to the crisis.

Last week, the European Commission proposed member states cut gas consumption by 15% over the next seven months. The target would be voluntary, but under the proposals the Commission could decide to make it mandatory in an emergency.

Although some countries have resisted the plan, the pressure on EU capitals to reach an agreement is high.

Ursula von der Leyen, the European Commission President, has previously said the prospect of Russia completely cutting off gas supplies to the EU was a “likely scenario”.

Since Russia invaded Ukraine in February the price of wholesale gas has already soared, with a knock-on impact on consumer energy bills across the globe.

The Kremlin blames the price hike on Western sanctions, insisting it is a reliable energy partner and not responsible for the recent disruption to gas supplies.

Can the world cope without Russian oil and gas?No faith in Russia, Germany scrambles for energyRussian gas boss says ‘our product, our rules’

Meanwhile, Ukraine still hopes that a landmark deal brokered by the UN last week could mean grain exports resume from its Black Sea ports “within days.”

“If the sides guarantee security, the agreement will work. If they do not, it will not work,” Infrastructure Minister Oleksandr Kubrakov said.

In his nightly address, President Zelensky also said he was confident that grain exports from Ukraine will start again this week.

His comments came after fears the deal could fall apart after Russia targeted Ukraine’s main port of Odesa with missiles on Saturday.

As many as 20 million tonnes of grain are trapped in Ukraine, unable to leave because the Russian navy controls most of the Black Sea.

Crimean bridge: Excitement and fear in Ukraine after bridge blast
Saky airfield: Ukraine claims Crimea blasts responsibility after denial
Ukrainians line up to donate blood to save ‘soldiers who are fighting for us’