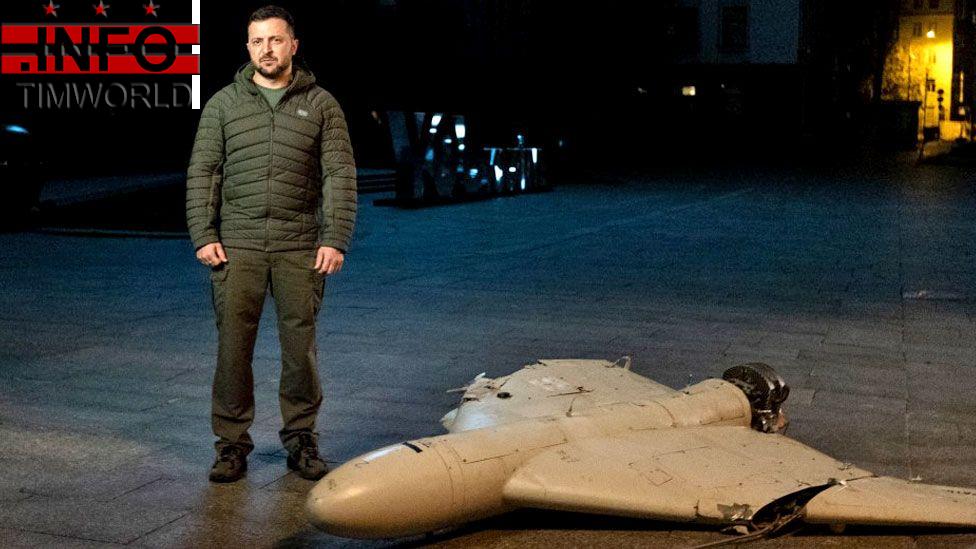 He added that in total, Moscow had also carried out some 4,500 missile strikes and over 8,000 air raids.

Speaking from Kyiv and standing beside what appeared to be a downed Iranian Shahed drone, Mr Zelensky pledged to “clip the wings” of Moscow’s air power.

Western officials believe Iran has supplied a large number of drones to Russia, but Moscow and Tehran deny it.

It comes as US Secretary of State Antony Blinken called Russia’s aggressive use of drones “appalling”.

The top US diplomat accused Russian commanders of using the devices to “kill Ukrainian civilians and destroy the infrastructure they rely on for electricity, for water, for heat” during a visit to the Canadian capital Ottawa.

“Canada and the United States will keep working with our allies and partners to expose, to deter, and to counter Iran’s provision of these weapons,” Mr Blinken said.

Western countries say Iran is supplying its domestically developed drones to Moscow and that Iranian military experts are on the ground in Russian-occupied Crimea to provide technical support to pilots.

Kyiv has identified the drones used in some attacks on its infrastructure as Iranian Shahed-136 drones. They are known as “kamikaze” drones because they are destroyed in the attack – named after the Japanese fighter pilots who flew suicide missions in World War Two.

Ukraine says around 400 drones have already been used by Russia, from a total order of roughly 2,000 weapons.

But Tehran has repeatedly denied that it has struck any arms deal with the Kremlin, and Moscow also denies using Iranian drones.

“If… it becomes clear to us that Russia has used Iranian drones in the war against Ukraine, we will definitely not be indifferent about this issue,” he added.

Tehran’s regional adversary, Israel, has also attacked Iran over the alleged exports. During a meeting with US President Joe Biden at the White House on Thursday, President Isaac Herzog slammed the regime’s activities.

“The fact that Iran, following its activities in killing its own citizens, in working towards nuclear weapons endlessly, endangering the entire world and the region — and now killing innocent civilians in Ukraine, clearly that gives you a picture of what Iran is all about,” Mr Herzog said.

Prior to the visit, he had pledged to share “proof” with Mr Biden that Iran was supplying the weapons.

Meanwhile, US officials have said they will supply Ukraine with an additional $275m (£237m) of military aid, according to the Associated Press.

The assistance is expected to be used to restock ammunition for Ukrainian artillery systems, including the HIMARS launchers that Kyiv’s forces have used to great effect.

On the ground, fighting has slowed in recent days, with a much anticipated Ukrainian advance on the southern city of Kherson stalled due to poor weather.