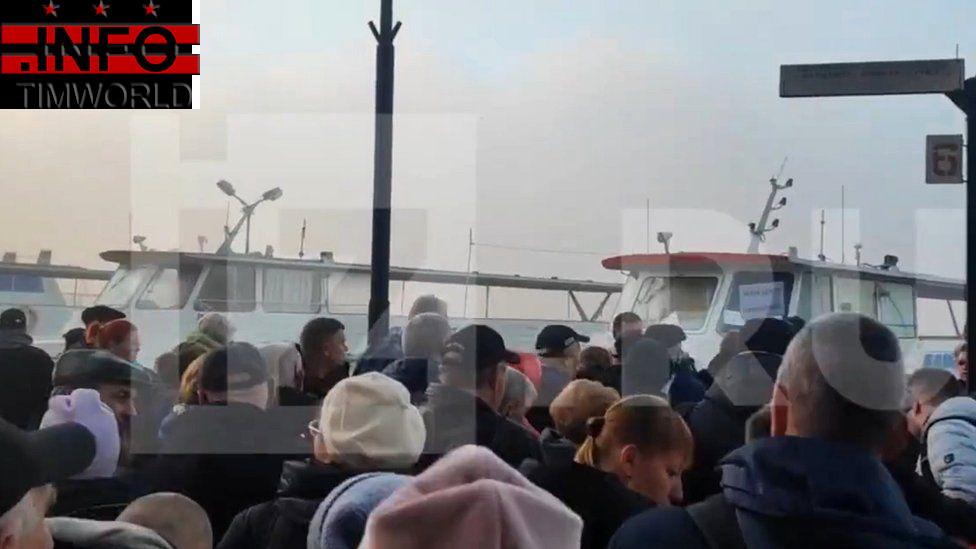 Vladimir Saldo said 50-60,000 civilians would leave four towns on the west bank of the Dnieper river in an “organised, gradual displacement”.

All Russian-appointed departments in Kherson city would cross the river too.

Russian TV footage showed a number of people gathering near the Dnieper.

As they queued for boats, it was not clear how many were leaving. The transfer or deportation of civilians by an occupying power from occupied territory is considered a war crime.

Ukrainian presidential adviser Mykhailo Podolyak pointed out it was less than a month since Russia had held a ceremony to annex Kherson: “Reality can hurt if you live in a fictional fantasy world.”

A Russian-installed official, Kirill Stremousov, warned Kherson residents that Ukrainian forces would launch an assault on the city “in the very near future”. “No one is going to retreat but we also want to save your life. Please move as quickly as possible to the left bank,” he added.

Mr Saldo, who was appointed governor of the region by Moscow, told Russian TV that no-one was about to surrender, but it was “undesirable” for residents to remain in a city facing military action. “In the past two days, more than 5,000 people have left Kherson,” he was quoted as saying.

Earlier this month, Kherson’s exiled deputy mayor said only 100,000 residents remained in Kherson city of the pre-war population of 320,000, with many fleeing Russia’s occupation.

The mayor of Russian-occupied Melitopol, Ivan Fedorov, warned that Kherson’s civilians were facing enforced deportation and being deprived of their homes so that Russia could populate the city with “soldiers and traitors”. Last month, Ukraine said 2.5 million people had been forcibly deported from Ukraine to Russia.

The Russian-appointed governor accused Ukraine of building up for a large-scale offensive and planning to destroy the Kakhovka dam on the River Dnieper, flooding the area.

Kherson was the first major city to fall to Russian forces when they invaded Ukraine in February. However, in just a few weeks the Ukrainian military has recaptured territory in the north of the region and pushed as far as 30km (19 miles) south along the Dnieper, threatening to trap Russian troops.

As well as annexing Kherson, the Kremlin also announced last month that three other Ukrainian regions were part of Russia – a claim rejected internationally.