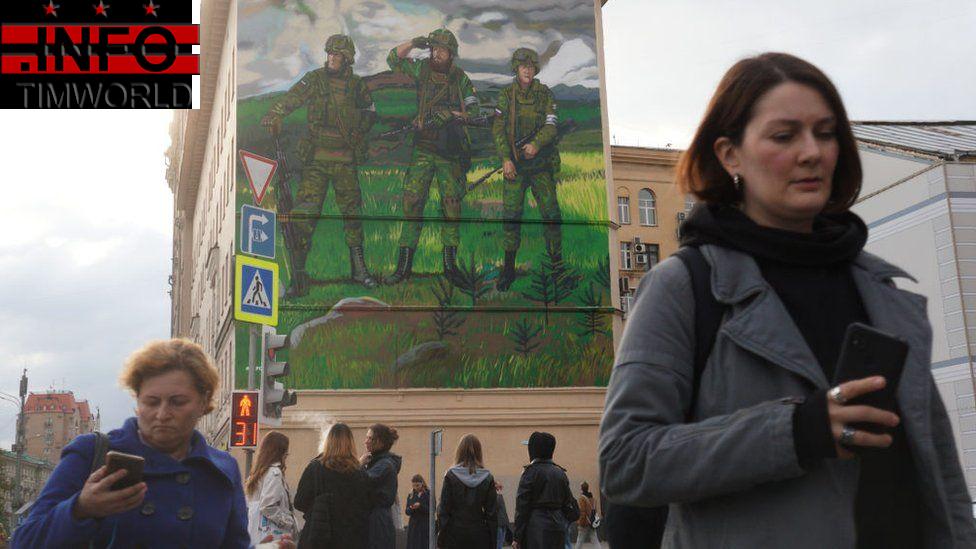 Denounced as illegitimate and a sham by Ukraine and the West, the votes are taking place over five days just behind the front line. Reports speak of soldiers going door to door to collect votes on the first day.

“You have to answer verbally and the soldier marks the answer on the sheet and keeps it,” one woman in Enerhodar told the BBC.

An annexation could lead to a claim by Russia that its territory is coming under attack from Western weapons supplied to Ukraine, the BBC’s Paul Kirby explains.

The UN says any annexation of territory resulting from the use of force is a violation of international law.

UN investigators have found that Russia committed war crimes in Ukraine, including executions, torture and sexual violence. Ukrainians, they say, were forcibly transferred to Russia, where they described being beaten and given electric shocks.

Cases were documented in which children were raped and tortured, and more were killed in attacks which failed to distinguish between civilians and military.

The investigators documented two cases of abuse against Russian troops by Ukrainian forces but the main focus was on human rights violations by the Russian military.

On the ground in Ukraine, Russia was accused by the Ukrainians of using two Iranian-made suicide drones to attack an administrative building in Odesa, killing one civilian.

Tens of thousands of Russian reservists are being called up to fight in Ukraine but the defence ministry in Moscow has revealed a host of occupations that will be exempt including IT workers, bankers and journalists working for state media.

An emergency European Union meeting is to be held on Monday in Brussels to co-ordinate the “handling of Russian draft dodgers” at an EU level.

Our correspondent, Sarah Rainsford, has been to Vilnius in Lithuania to speak to Russians who oppose Vladimir Putin’s war and who say their home country is now “like a huge prison”.

When Russia invaded its neighbour, Anastasia Shevchenko, an activist who spent two years under house arrest for protesting against the Russian president, was serving a suspended sentence. One wrong move, even an anti-war comment, could have put her behind bars.

But Anastasia could not bear to be silenced, so she squeezed her family’s life into a couple of cases and they fled in the middle of the night for Lithuania.

“What is going on in Russia now is like total fear,” she says. “So many people are frightened because we know they can do anything. It’s not only prison, or fines: you can be killed or poisoned. It’s like a huge prison. All the country.”

Sympathy for Vladimir Putin may be in short supply in the West but former Italian Prime Minister Silvio Berlusconi is an old ally and never afraid to court controversy.

Speaking ahead of this weekend’s general election in Italy, he defended the invasion of Ukraine, saying Russia’s leader had been “pushed” into the conflict,

Image source, Getty ImagesImage caption, Mr Berlusconi with Mr Putin during a controversial visit to the annexed-Crimean peninsula in 2015

The 85-year-old said Russian troops were meant to replace the government with “decent people” then leave.

The three-time prime minister’s party is expected to take power as part of a right-wing coalition after the poll on Sunday.

‘The dancers have families’

How does the war affect Ukrainians working abroad?

Russian-born choreographer Alexei Ratmansky, who recently staged a production of Giselle in London with the United Ukrainian Ballet, has told the BBC about the challenges.

“The dancers have families. I have a family in Kyiv. We are all checking the news constantly,” Ratmansky, who grew up in Ukraine, told the Hardtalk programme’s Stephen Sackur.

“You wake up in the morning and you want to know which cities were bombed, how many people were killed, which buildings were destroyed and check that all your loved ones are OK and safe.”

Choreographer Ratmansky: We do it for Ukraine

The United Ukrainian Ballet is a group of Ukrainian dancers, technicians and creatives who fled their country when Russia invaded and are now based in the Netherlands.

Ratmansky, a former principal dancer with the Ukrainian National Ballet, Royal Winnipeg Ballet and Royal Danish Ballet, was artistic director of the Bolshoi Ballet from 2004 before joining the American Ballet Theatre in 2009 as artist in residence. He was working on a new production with the Bolshoi when the conflict began and he left Russia.

Gazprom: Nord Stream 1 supply to EU to be cut further
McDonald’s to reopen in Ukraine as war with Russia rages on
Zaporizhzhia nuclear plant: EU provides anti-radiation tablets to Ukraine