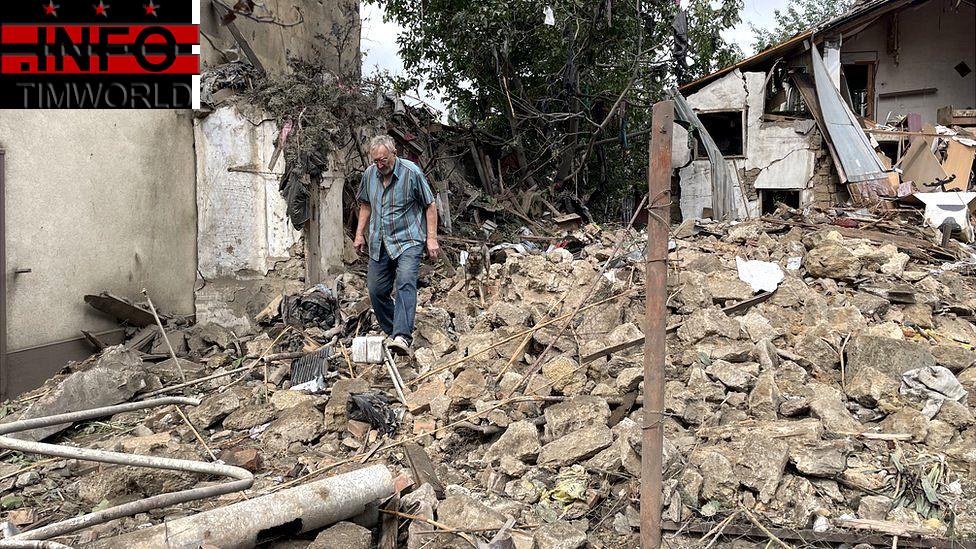 The first night is always the hardest in Mykolaiv. Sleep is near impossible in a Ukrainian city that has been under almost constant Russian bombardment since the start of the war in February.

Your mind is either racing – frantically trying to work out how close the latest explosion was, whether it was a missile or a rocket, a one-off or part of a salvo – or wondering how long it might be before the windows shudder again and the screaming blare of the air raid siren sounds.

“Sleep? Not much,” said the manager of our hotel one morning last week. She had seemed irrepressibly energetic in March, racing past the boarded-up windows to show guests the makeshift bomb shelter in the cellar.

But now her face betrayed the exhaustion that appears to be overwhelming much of Mykolaiv.

“I don’t have my own cellar at home. It’s flooded. So, we’ve nowhere to hide. We just lie there in the dark. Last night the explosions were the closest yet – a couple of blocks away,” she said.

Image caption, At least 130 civilians have been killed in Mykolaiv since February, according to Ukraine’s military

Once ordinary noises, like a slammed door, or a growling truck, are now loaded with terror, as people brace themselves, instinctively, subconsciously, and permanently, to react to anything that might sound like a missile, or a plane.

“Me? I’ve been trying to go to bed early. Around 7 or 8pm. That way you get a few hours before the booms begin, if you’re lucky,” said Gela Chavchavadze, 60, the owner of a café that delivers free cooked meals, most mornings, to neighbourhoods bombed the night before.

The explosions usually start soon after midnight. Artillery fire from Russian positions to the south, rockets from behind the frontlines further east, jet-launched bombs, and devastating cruise missiles thought to be launched from ships in the Black Sea and beyond.

Sometimes there’s a specific target, but – whether by accident or design – the blasts mostly occur in residential neighbourhoods and with a blitz-like randomness that turns every night into a nerve-shredding mind-game.

Over the past week the Russian bombardment – including several day-time attacks – has reached a new level of ferocity.

Image caption, Olga, a resident whose apartment was damaged by cluster bombs, said her grandson woke up in the night in tears

“It’s a big city,” said Mykolaiv military spokesman Capt Dmitro Pletenchuk, by way of offering some notional statistical comfort to visiting journalists standing near the ruins of the city’s administrative headquarters. But he urged us to wear body armour at all times and texted me later to confirm that 130 civilians had been killed and 589 wounded by Russian missiles since February.

Sweeping shards of glass from the ruins of his kitchen table two hours after cluster bombs exploded on the street outside, dentist Alexander Yakovenko, 58, wondered why he was still alive.

“I can’t explain it. I shouldn’t be [alive] here. The siren goes off every night. But, for some reason, last night I decided to move away from my bedroom and into the other side of the apartment,” he said, pointing at the shrapnel marks on the wall that would surely have killed him.

A neighbour, Olga, who had come round to help clear up, began to sob.

“What do I say to my grandson? He woke up one night, crying, and said to me – ‘Granny, I want to live’,” she said, before returning to sweep more glass off the floor.

Image caption, A recent missile attack left a crater near the home of Svetlana Kharlanova (left)

Seeking comfort or meaning amid such destruction, some people in Mykolaiv are leaning on their religion.

“It’s all in God’s hands. What will be will be,” said 67-year-old Svetlana Kharlanova, standing on the doorstep of her near-miraculously intact cottage, nursing a small shrapnel wound in her head, four hours after a missile left a deep crater in her yard.

Others are seeking solace in something that was initially banned in Mykolaiv for the first months of the war.

“I see plenty of people drinking now – even early in the morning. I don’t think they should have lifted the alcohol ban. It’s not appropriate during war time,” said café owner Gela Chavhavadze.

We are holding on, say Mykolaiv residents

Heavy drinking is a fact of life, and a problem, in many parts of Ukraine. I watched a drunk soldier stagger up some stairs at a hotel one evening, and a loud, slurred argument between two older men at another café.

But Dmitro Voloshchenko, who owns a craft brewery in Mykolaiv, insisted that “to my mind, we don’t have more problems than before [the ban was lifted]. Alcohol is really helping… if you can hold your drink.”

What no one disputes is the physical and mental damage that the nightly bombardments wreak on the roughly 250,000 people – out of a pre-war population of half a million – still living in the city.

Image caption, The strikes on Mykolaiv have been occurring largely in residential neighbourhoods and with a blitz-like randomness

“It destroys our sleep, and our dreams. It weakens people’s nervous systems and causes fear and panic. It’s hard. I get woken every night not just by the bombs, but by phone calls. When I sleep, I dream about the war and the destruction,” said Oleksandr Demianov, a trauma doctor who has treated many of the city’s casualties.

But there are some people – not in Mykolaiv itself – who are learning to relish the sound of explosions at night.

The nearby city of Kherson, 50km (30 miles) south-east, is under Russian occupation. But in recent weeks, Ukrainian forces have begun to target Russian positions close to the city, using new Western artillery and rockets.

“If we hear an explosion, then we celebrate, because we know it means our forces are getting closer to us. We’re waiting to be liberated,” said Konstantin Ryzhenko, an independent Ukrainian journalist who has gone into hiding in Kherson.