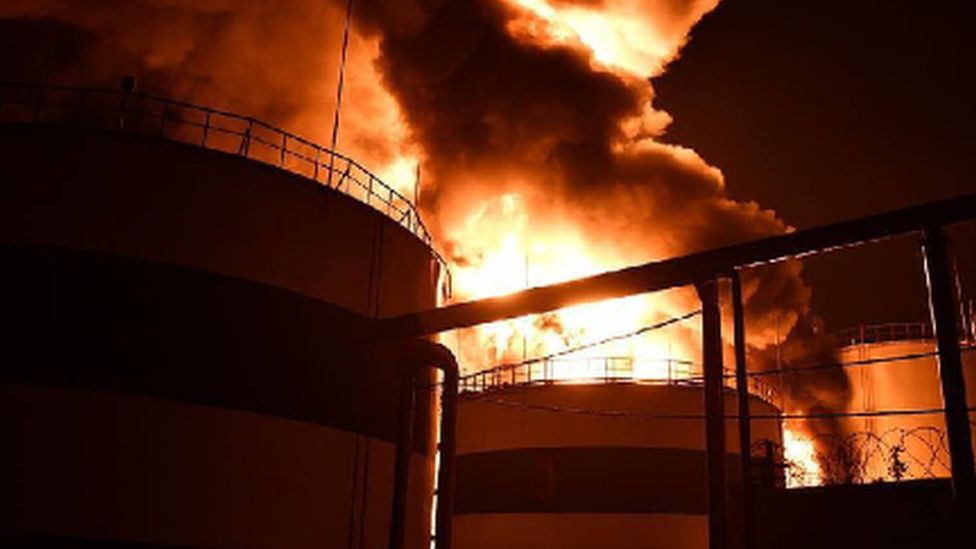 By Paul Adams in Kyiv and Merlyn Thomas in LondonBBC News

Russia has hit the Ukrainian capital, Kyiv, with a wave of Iranian-made kamikaze drones – killing at least one person, says Mayor Vitali Klitschko.

And in the port city of Mykolaiv, sunflower oil tanks were set on fire by similar drones, said the city’s mayor.

A week ago, the capital was hit by Russian missiles at rush hour, part of nationwide attacks which left 19 dead.

A Ukrainian air force official said all the drones had flown into the country from the south.

Oleksandr Senkevich said three drones ignited the tanks at Mykolaiv late on Sunday evening, hours before the attack in Kyiv.

Image source, TelegramImage caption, Tanks at the port city of Mykolaiv were set on fire by Russian drone attacks, according to the city’s mayor

Monday morning’s attacks in Kyiv were from drones – the low buzzing of these slow-moving weapons is becoming familiar across the country.

The city reverberated to the rattle of gunfire as anti-aircraft batteries frantically tried to shoot them down. Video on social media appeared to show one interception.

Two were close to the city centre, with sirens and car alarms heard across the area.

“The enemy can attack our cities, but it won’t be able to break us,” said President Zelensky, describing the attacks as “terrorising the civilian population”.

What is being targeted is hard to determine. The mayor’s office says residential and non-residential buildings have been hit. Railway officials say explosions were seen close to Kyiv’s main station.

One Reuters journalist reported seeing fragments of a drone used in the attack that bore the words, “For Belgorod”.

The Kremlin has accused Ukraine of launching missile attacks on the Russian border city of Belgorod. Ukraine has denied this.

Two gunmen – who had volunteered to fight in Ukraine – killed 11 people on Saturday at a Russian military training camp in the Belgorod region.

Recent attacks in Ukraine have targeted the country’s energy infrastructure. It will be surprising if that is not the case again.

Writing on the Telegram social media site, Mr Klitschko said there were four strikes in Kyiv, although residents heard five or six explosions. He also told people to stay in air raid shelters.

But despite the warnings, the streets are far from deserted. Between the first and second set of strikes, plenty of people seemed to be going about their Monday morning business.

What are kamikaze drones?

Believed to include an Iranian-supplied weapon called the Shahed-136These drones loiter above a target before attackingPacked with explosives which detonate upon impact, destroying the droneOften sent in waves and difficult to spot on radarThe US said Iran planned to send hundreds to Russia, costing just $20,000 (£17,800) eachImage source, TelegramImage caption, Mayor Klitschko shared a photo of what he said were fragments of a kamikaze drone on Telegram

Russian President Vladimir Putin said last week’s strikes were in retaliation for the bombing of a key bridge linking Russia to occupied Crimea, which he blamed on Ukraine.

It was the first time during the war that the centre of Kyiv had been directly targeted.

Earlier this week, Mr Putin said there was no need for more large-scale strikes on Ukraine. Most designated targets had been hit, he said, adding that it was not his aim to destroy the country.