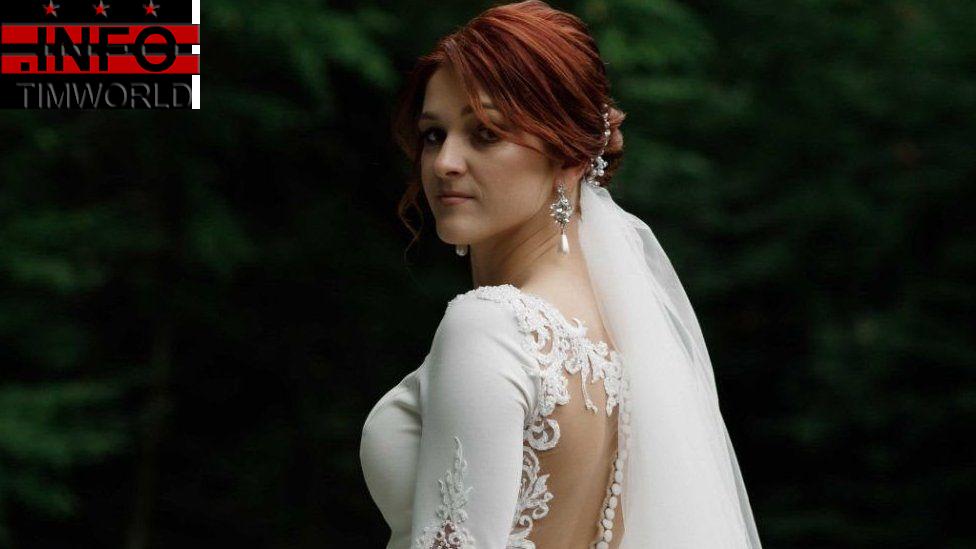 A Ukrainian woman who is eight months pregnant is being held at a notorious prison camp in the Russian-occupied part of eastern Ukraine, her friends and family say.

Mariana Mamonova, a military medic, was taken prisoner at the start of April while serving in Mariupol.

She is understood to be living in difficult conditions at the Olenivka prison camp in the occupied Donetsk region, where dozens of Ukrainian prisoners were recently killed in an attack which both sides blame on each other.

Mariana’s family have appealed to the Ukrainian government for her to be freed as part of a prisoner exchange before her baby is due at the end of September.

Information about Mariana’s current condition is scarce, and it is not clear what will happen to her or the baby if she gives birth in prison.

The Ukrainian government says it has information that she is well and the matter has its “special attention”.

Mariana’s husband, Vasilii, found out she was pregnant with their first child while she was serving on the front line, and has not seen her since.

“She really wanted to tell me in person, but instead she sent me little hints – emojis of a mother and father with a little baby,” he told the BBC.

But just weeks after finding out he was to become a father, Vasilii discovered through social media that his wife had been captured by Russian forces.

The Olenivka prison camp has been under the control of Russian-backed authorities in Donetsk since 2014. Conditions there are said to be extremely poor.

A fellow prisoner, Anna Vorosheva, said Mariana was in a room with more than 20 other prisoners when she first arrived and had to sleep on the floor.

“The women talked to each other all the time and she told us she was pregnant. Straight away, everyone tried to help her – giving her food, making sure she got fresh air,” Ms Vorosheva, who was released in July, told the BBC.

Eventually Mariana was moved to a smaller room with fewer people, and her cellmates ensured she was able to sleep on one of the room’s two beds each night.

According to Ms Vorosheva, when Mariana first arrived she was optimistic about the possibility of a prisoner exchange – all the women assumed she would be prioritised because of her pregnancy.

“She is a medic, she understands her body. The baby started kicking on time, so she understood that everything was going OK.”

But at the end of June, a prison guard told Mariana that she would not be released for at least another month and a half, meaning she would be just six weeks away from her due date at the earliest before she was freed.

By then, she was getting increasingly worried that she would give birth while still in captivity, Ms Vorosheva said.

“The hospitals and facilities in Donetsk have become completely cut off from the medical community – everything there is in such decline – it’s scary to give birth there.”

As well as the dangers of giving birth without proper medical services, Mariana worried that the baby would be taken away from her. Vasilii has the same concerns.

“A baby can’t be kept in those conditions, so they could just take it away,” he said. “She must be devastated right now.”

One of Mariana’s best friends, Ksenia Faryna, who is in touch with other former prisoners, says Mariana was told she could be separated from her child after it turns three.

Neither the unrecognised Donetsk authorities or the Russian defence military have responded to the BBC’s questions about Mariana’s health, or what would happen if she were to give birth in captivity.

Mariana’s friends and family found out about her capture from Russian propaganda videos posted on social media.

One such video, posted on 4 April on the Telegram channel of Chechen leader Ramzan Kadyrov, reportedly shows a group of 267 Ukrainian marines who surrendered to Russian forces. Friends say they recognised Mariana’s face among the prisoners.

Her family immediately started pressing the Ukrainian government for information, but were repeatedly told they needed to wait.

“Prisoner exchanges kept happening, but I couldn’t understand why Mariana wasn’t part of it,” her husband, Vasilii, said.

He also questioned why she remained on the frontline while she was pregnant, particularly in Mariupol which suffered weeks of relentless Russian bombardment during the first three months of the war.

Mariana was optimistic and positive at the start of the conflict, says Ms Faryna, but as conditions in Mariupol deteriorated she all but lost contact with her friend. The last message she received from Mariana was one on 17 March which simply read: “I am alive.”

Mariana’s friends and family patiently waited for news for four months. But as her expected due date approached, and no progress was made, they decided to go public with her case, including starting a petition to call for her release.

A Ukrainian government spokesperson said the case was a top priority for the government.

“There is definitely hope for the resolution of this matter,” Andrii Yusov, from the co-ordination headquarters for prisoner affairs, told the BBC.

“I can’t say when we spoke to her last but this case is monitored very closely, formally and informally.”

Vasilii hopes that speaking out about his wife might persuade the Russian-backed authorities to release her on purely humanitarian grounds.

“There has to be some human understanding here,” Vasilii says. “A mother and her children are sacred everywhere… Let them free her. As human beings – let her go. She’s a good person – she’s like a little shining sun.”

INTERVIEW: As UK counts pennies, we count casualties – ZelenskaON THE GROUND: What weapons are being supplied to Ukraine?READ MORE: Full coverage of the crisis