Ukraine war: First grain ship out of Ukraine cleared to sail to Lebanon 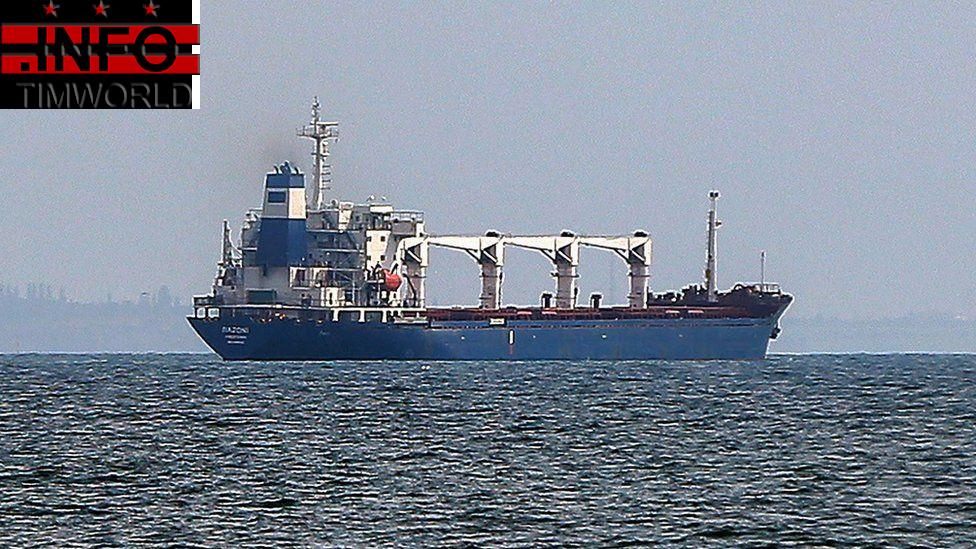 Ukraine war: First grain ship out of Ukraine cleared to sail to Lebanon

The first grain ship to depart Ukraine since Russia invaded has been cleared to leave Turkish waters for its destination in Lebanon.

A team of officials from Russia, Ukraine, Turkey and the UN inspected the Razoni’s cargo of 26,000 tonnes of corn and its crew.

The UN said the ship was free to leave for Lebanon on Wednesday.

Russia has been blockading Ukraine’s ports since it invaded in February, intensifying global food shortages.

Under a deal brokered by Turkey and the UN last month, which set up a Joint Coordination Centre (JCC) to oversee exports, both sides agreed shipments could resume.

The Razoni, which left the Ukrainian port of Odesa on Monday, is bound for the Lebanese port of Tripoli.

“The team carried out a three hour inspection and confirmed that crew and cargo are as authorised and consistent with the information the JCC received before the vessel sailed from Odesa,” the UN said on Wednesday.

“The joint inspection team had the opportunity to discuss with the crew and gain valuable information on the vessel’s journey along the maritime humanitarian corridor in the Black Sea that was agreed by the JCC.

“The JCC will use this voyage in its ongoing work on fine tuning procedures and processes to enable the continuation of safe passage of commercial vessels across the Black Sea under the Initiative.”

Ukraine has said its naval vessels will guide cargo ships through waters that have been mined.

How much grain needs to be shipped from Ukraine?How Russia is stealing Ukraine’s sunflower seeds

Ukrainian authorities say there are 17 other grain ships waiting to leave the country’s Black Sea ports once the Razoni completes its voyage safely.

The deal between Russia and Ukraine, brokered at the end of July after two months of negotiations, was called into doubt when Russia launched two missiles at the port of Odesa less than 24 hours after the agreement was announced.

Trust is low on both sides, but if kept to, the deal is set to last 120 days and can be renewed if both parties agree.

Russia and Ukraine jointly account for nearly a third of global wheat exports.

Watch: ‘We hope nothing will happen’ – Razoni ship crew member