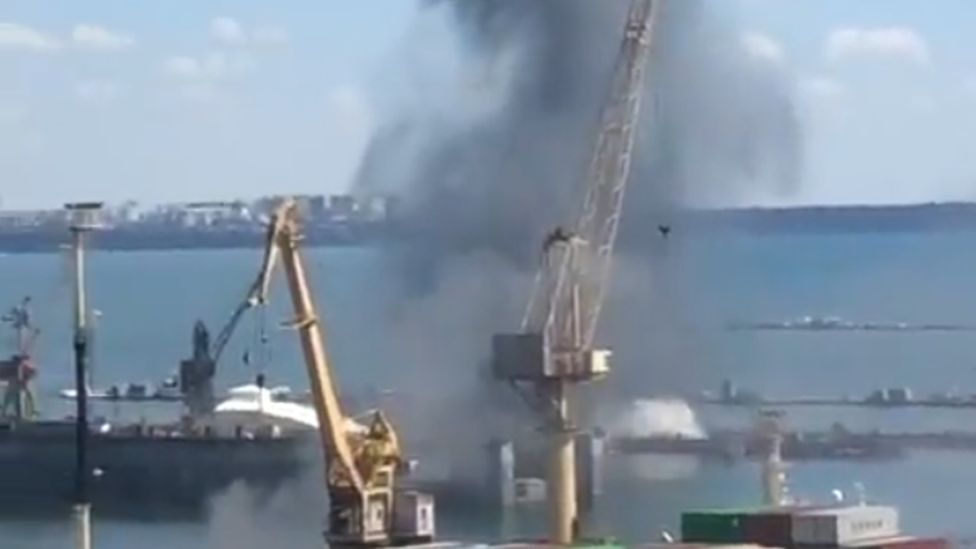 Explosions have rocked a key Ukrainian port just a day after Kyiv and Moscow reached a landmark deal to allow the resumption of grain exports.

Under the terms of Friday’s deal, Russia agreed not to target ports while grain shipments were in transit.

“In our contact with Russia, the Russians told us that they had absolutely nothing to do with this attack, and that they were examining the issue very closely and in detail,” Hulusai Akar said in a short statement.

“Striking a target crucial for grain export a day after the signature of Istanbul agreements is particularly reprehensible,” he tweeted, adding that the EU “strongly condemns” the attack.

UN Secretary General Antonio Guterres unequivocally condemned the attack, saying that full implementation of the grain deal made between Russia, Ukraine and Turkey was imperative.

“These products are desperately needed to address the global food crisis and ease the suffering of millions of people in need around the globe,” a UN spokesperson added.

In a post to social media, the Ukrainian military’s southern command centre said two Kalibr missiles had hit the port, while two more had been shot down by air defence systems.

Oleksiy Honcharenko, a local MP, wrote on Telegram that the city’s port had caught fire after the strike.

“These scumbags sign contracts with one hand and direct missiles with the other,” Mr Honcharenko wrote.

But a spokesperson for the Ukrainian military’s southern command said the strike did not have a serious impact of the port.

“No significant damage was caused to the port infrastructure,” Nataliia Humeniuk said. “These are quite expensive rockets, so they are being used not too often. They are said to be highly accurate, so they hit deliberately.”

On Friday, officials from Kyiv and Moscow signed a deal to allow millions of tonnes of grain trapped in Ukraine to be exported.

The agreement was hailed as a “beacon of hope” by the UN after months of fighting.

The deal – which took two months to reach – is set to last for 120 days, with a co-ordination and monitoring centre to be established in Istanbul, staffed by UN, Turkish, Russian and Ukrainian officials. It can be renewed if both parties agree.

In the latest fighting on the ground, British defence officials said Russian troops in the Kherson region risked being cut off from their supply lines by Ukrainian forces.

A large counteroffensive has been launched by Kyiv in the south of the country and its forces have used new long-range US supplied missile systems to target the Antonovsky Bridge in Kherson.

If the bridge were to be destroyed, Russian supply lines would be severely stretched.

Is Russia trying to wreck the deal?

This attack on Odesa raises a number of questions. If, as most people assume, it was launched by Russia, what were the targets and what was the message?

Coming so soon after Russia and Ukraine signed documents agreeing to abide by the terms of an agreement to facilitate the export of grain from Odesa and its satellite ports, it’s tempting to see it as an attempt by Moscow to wreck it, or at least set the terms.

But that seems to run counter to yesterday’s statement by Moscow’s Defence Minister, Sergei Shoigu, that Russia’s responsibilities were clearly set out.

The text of the document signed by Russia in Istanbul has yet to be made public. UN officials say it’s identical to the one signed by Ukraine.

It says the parties “will not undertake any attacks against merchant vessels….and port facilities engaged in this initiative”.

Asked by the BBC what the UN would do if Russia didn’t keep its word, the Secretary General Antonio Guterres said “the UN has no instruments for that, but I think that would be an absolutely unacceptable scandal”.