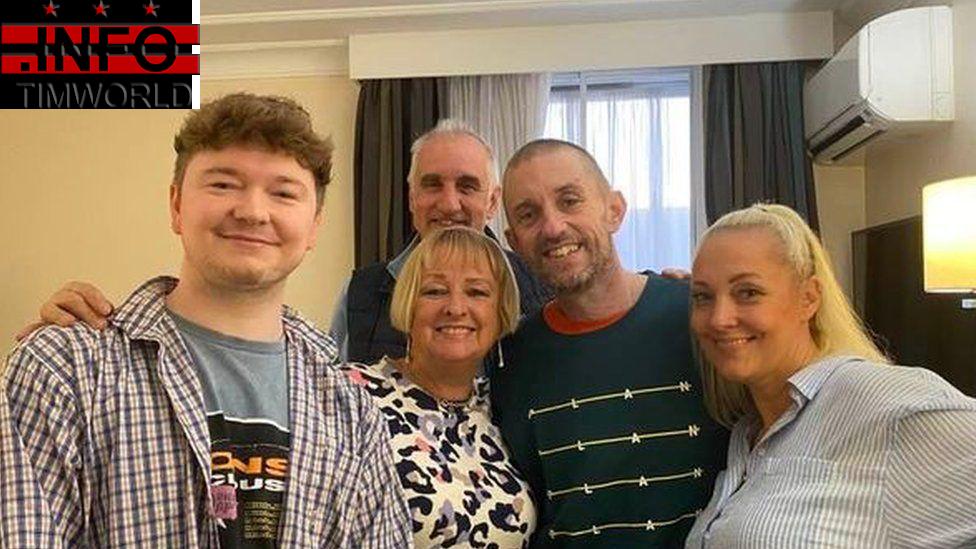 Watch: We got out by the skin of our teeth – freed Briton

Five British nationals captured by Russian-backed forces in Ukraine have returned to the UK.

Ten detainees, including the five Britons, were released after Saudi Arabia said it had brokered an exchange between Russia and Ukraine.

She thanked those involved in organising his return and said she was “just amazed this day has come”.

In a video recorded on the plane, Mr Pinner, from Bedfordshire, said they had escaped “by the skin of our teeth”.

“We’re now out of the danger zone and on our way home to our families,” added Mr Aslin, from Nottinghamshire, who has now been reunited with his Ukrainian fiancé Diana Okovyta.

A picture taken at Heathrow shows the couple together, shortly after Mr Aslin arrived back in the UK on Thursday morning.

“He promised to come back and he did,” Ms Okovyta wrote on social media, adding she was “so grateful” to those who helped facilitate his release.

Dominik Byrne, co-founder of the UK-based Presidium Network – which has been supporting the family of Mr Healy – said they were all “looking forward to normality with their families after this horrific ordeal”.

Mr Healy, who is in his early 20s and from Cambridgeshire, had been volunteering in Ukraine as an aid worker when he was captured by Russian-backed forces at a checkpoint in April, alongside Paul Urey, who died in July while in detention.

The UK government has not confirmed the process that led to the men’s release.

In July, a court in the self-declared Donetsk People’s Republic had sentenced Mr Aslin, 28, and Mr Pinner, 48, to death.

Mr Harding, in his 50s, from Sunderland, was one of several others awaiting trial.

Prime Minister Liz Truss said the news of the release ended “months of uncertainty and suffering for them and their families”.

She thanked Ukrainian President Volodymyr Zelensky “for his efforts to secure the release of detainees, and Saudi Arabia for their assistance”.

In his nightly address, Mr Zelensky said he was “sincerely grateful to everyone who contributed” to the release of the Britons.

“The enemy sentenced them to a long prison term or the death penalty. We saved their lives,” Mr Zelensky said.

“They’ve been through months of torture, strain and stress as a result of this,” the MP for Newark said.

Foreign Secretary James Cleverly welcomed the release of the British nationals but added: “Tragically that was not the case for one of those detained and our thoughts remain with the family of Paul Urey.”

News of their release came on the same day Russian President Vladimir Putin announced a partial mobilisation of military reservists following a series of setbacks on the battlefield.

Their return was part of one of the most significant prisoner swaps of the war so far, with 215 Ukrainian soldiers released – including commanders of the Azov regiment, which defended Mariupol – by Russia.

In exchange, Ukraine handed over 55 Russian soldiers, as well as the pro-Kremlin Ukrainian politician and oligarch Victor Medvechuk, who was facing charges of treason.

In Moscow, officials are celebrating their soldiers’ return. The Kremlin said the released prisoners were receiving the “necessary psychological and medical assistance”.

PREVENTING FOOD WASTE: ‘About 70% comes from our homes’UNDER THE SKIN: Where’s the most painful place to get a tattoo?