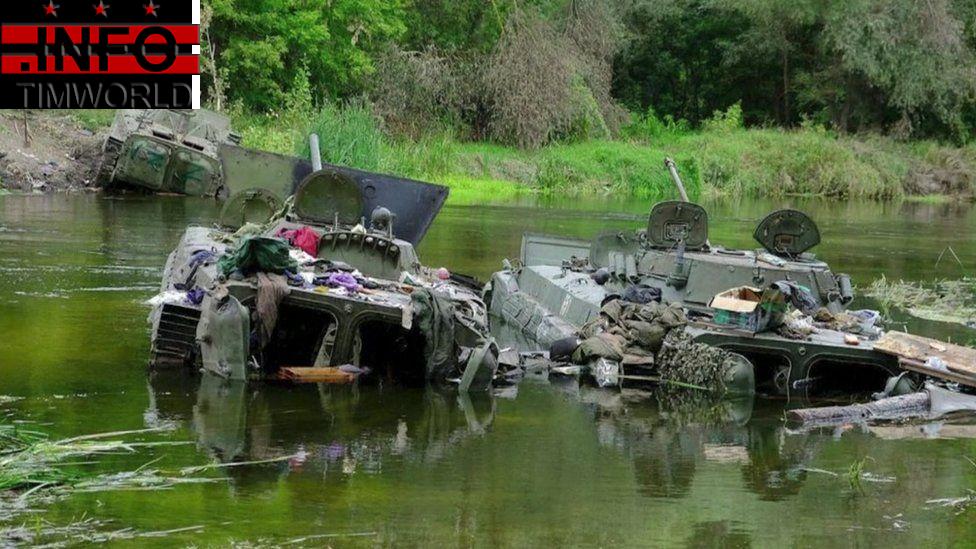 Published9 hours agoSharecloseShare pageCopy linkAbout sharingImage source, ReutersImage caption, The Ukrainian military has released these pictures of destroyed Russian tanks in a riverUkraine says it has made significant gains in pushing back Russian troops, retaking more than 3,000 sq km (1,158 sq miles) of territory in recent days. Jonathan Beale, the BBC’s defence correspondent, takes a closer look at why they have been so successful – and what hurdles Ukraine’s forces may still face in winning the war.

“Don’t underestimate the Ukrainian’s ability to surprise,” a senior US military officer told me early this summer, just as Russia was continuing to make advances in the Donbas.

Ukraine’s ability to surprise has become a hallmark of this war: from the Russian retreat from Kyiv, to recent attacks in Crimea. Now there’s another surprise happening in the east of the country.

Until now, it was Russia making most of the advances here – albeit a slow and grinding affair that was proving costly to its army. Now it’s Ukraine making the gains, taking back thousands of square miles of territory in just a matter of days.

The biggest gains for Ukraine have been in the east around the city of Kharkiv. The UK’s latest defence intelligence report says that Ukraine has now liberated an area twice the size of Greater London – though it’s difficult to establish the level of advances and continuing fighting with journalists kept well away from the frontline.

Ukraine says it has captured the strategically important cities of Izyum and Kupiansk – military hubs used by Russia to resupply its forces in the Donbas. Those losses alone would be a major blow to the Russian army.

Surprise has been the key to Ukraine’s advances. That and the intelligent use of western weapons – including US and UK long-range multiple rocket launchers, used to destroy Russian supply lines, ammunition dumps and command posts. Last week, the US Secretary of Defence Lloyd Austin said long range artillery had hit more than 400 key targets over the summer period.

Before the arrival of these weapons, Russia had always had a numeric advantage in terms of artillery. But now, the tables appear to have turned: US intelligence officials claim Russia is having to seek the help of North Korea to resupply them with millions of artillery shells, suggesting their stocks have been seriously depleted in the six months of fighting.

That impact of those western weapons – combined with Ukraine’s determination to take back territory – has forced Russian forces and their proxies into what looks like a chaotic retreat. Images on social media show tanks, armoured vehicles, weapons and ammunition left behind in a rush and abandoned.

Interestingly, the advance in the east has been much faster than the Ukrainians’ well-publicised offensive in the south towards the city of Kherson. Ukraine had telegraphed that offensive long before it got under way, while keeping quiet about its plans for the east. It all now appears to have been part of its plan: if not a diversion, then a screen to hide what it was preparing in the east.

It’s clear it successfully wrong-footed Russia. Over the past few months, Russia’s been redeploying forces from the east to bolster its defences in the south. Both fronts are now vulnerable.

But Ukraine is finding it harder to make gains in the south where they’re more exposed, having to fight in mostly open countryside. An advancing army needs more troops and firepower to overcome a defending army.

Image source, ReutersImage caption, Russian troops have left behind equipment in their rush to pull back from the frontlines

The danger for Ukraine may now be similar to the one Russia faced in the early stages of the war. Trying to advance on multiple fronts can prove costly – in terms of ammunition, equipment, and troops. The bigger the gains the longer the supply lines – which can then be targeted by a defender. There’s also the risk that those forces that have advanced furthest – creating a bulge in the defensive line – could become surrounded.

Despite the optimism, Ukrainian Defence Minister Oleksii Reznikov has warned that Ukraine’s forces in the east could now be more vulnerable to a Russian counter-attack. Seizing territory is not enough. An army has to hold the ground too. That might prove easier if the local population are behind you.

Ukraine’s double-pronged offensive is still risky. It could easily suffer setbacks. But this is much more than simply seizing back land – even if that is the ultimate goal.

Ukraine is sending a signal to the world that it really believes it can win this war. It’s already using these gains to appeal for more western weapons. And the offensive comes at a critical time – just before winter when it’ll be harder to fight and the will of the west will be tested. The war is far from over. But Ukraine is once again showing the world its ability to surprise and overcome the odds.