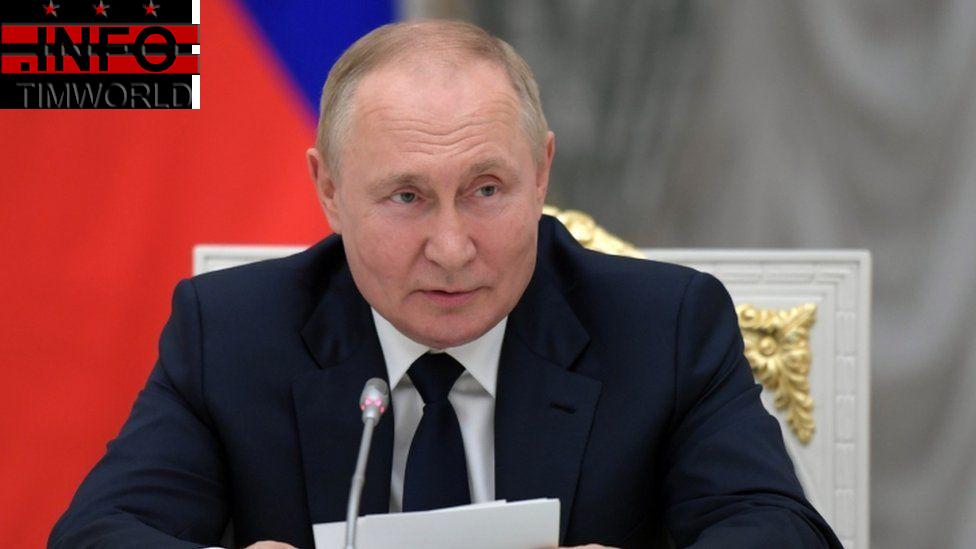 The Russian leader also claimed his side had barely started its offensive in in earnest.

His reasoning offered a glimpse of what could be Moscow’s wider strategy: the longer the war drags on, he claimed, the harder it will be for the other side to negotiate.

In Ukraine his forces have continued their slow push into the eastern Donetsk region, where a missile strike left at least one civilian dead on Thursday.

Russia has turned its attention to Donetsk after capturing the last city in neighbouring Luhansk – which, together with Donetsk, makes up the Donbas.

But in the south, there was some progress for Ukraine.

The country’s flag was raised once more on Snake Island, which was taken by the Russians at the start of the war. It became famous after the Ukrainian border guards stationed on the island told a Russian warship to “get lost” – although in far cruder language.

You can read more about the island’s strategic importance here.

President Volodymyr Zelensky has paid tribute to outgoing UK Prime Minister Boris Johnson, who was made to step down after a mass revolt by his own ministers.

“Not only me, but also all of Ukrainian society which sympathises with you a lot,” he is reported to have said to the British politician in a phone call – thanking him for the “decisive action” he has taken to help Ukraine.

“We have no doubt that Great Britain’s support will continue, but your personal leadership and charisma made it special.”

He and Boris Johnson had developed a close relationship since the start of the invasion in February, with the UK politician becoming the first international leader to visit Kyiv back in April.

However, in Russia – which has been angered by Mr Johnson’s support of Ukraine – the reaction was very different.

More than 21,000 war crimes in Ukraine – but could Putin be prosecuted?

Ukraine says it is now investigating more than 21,000 war crimes and crimes of aggression allegedly committed by Russia since the start of its invasion.

Prosecutor General Iryna Venediktova told the BBC she was receiving reports of between 200 and 300 war crimes a day.

But Ukraine has already jailed one Russian tank commander for war crimes after he admitted shooting 62-year-old Oleksandr Shelipov in the head, a few days after the invasion began.

However, prosecuting those giving the orders higher up – or even Russia’s President Vladimir Putin – would not be an easy task.

Our legal correspondent Dominic Casciani has taken a closer look at what it takes to prosecute someone for war crimes, and why bringing a successful case against President Putin is unlikely ever to happen.

Image source, Kirill KUDRYAVTSEV/AFPImage caption, Brittney Griner was handcuffed and wearing a red T-shirt as she was led into the court in Khimki outside Moscow

Britney Griner, the US basketball star who was arrested near Moscow a week before the invasion of Ukraine, has pleaded guilty to drugs charges.

The Olympic gold medallist said she had packed the cannabis oil vape cartridges found in her luggage in February by accident.

Cannabis oil is illegal in Russia and she faces up to 10 years in jail.

Griner’s wife, Cherelle, earlier called on President Joe Biden to do “whatever is necessary” to secure her release. Mr Biden told Cherelle Griner he was working to secure a release as soon as possible.

The basketball star had already sent the president a letter saying she was “terrified [she] might be here forever”.

Russia has denied that the player’s detention is connected to the icy diplomatic relations with the US, but John Garamendi, a member of the US Congress, warned last month that the war in Ukraine could exacerbate the issue.

“We don’t want Ms Griner to become a pawn in the political battle that’s being waged throughout the world right now,” he said.

Media caption, Watch: The drone Lithuania is donating to Ukraine

Ukraine’s newest drone has been unveiled in Lithuania, after a campaign by a local television channel raised €6m (£5.1m).

Laisves TV initially raised the cash to buy the drone through crowdfunding before the Turkish manufacturer decided to donate it for nothing.

The money will now be used to help arm the drone as well as provide humanitarian aid.

Find out more by watching the video above.

BUCHA: The man who came back from the deadWATCH: Russian woman rescued from a Kyiv bomb siteUKRAINE: In maps: Battles raging in east UkraineREAD MORE: Full coverage of the crisis