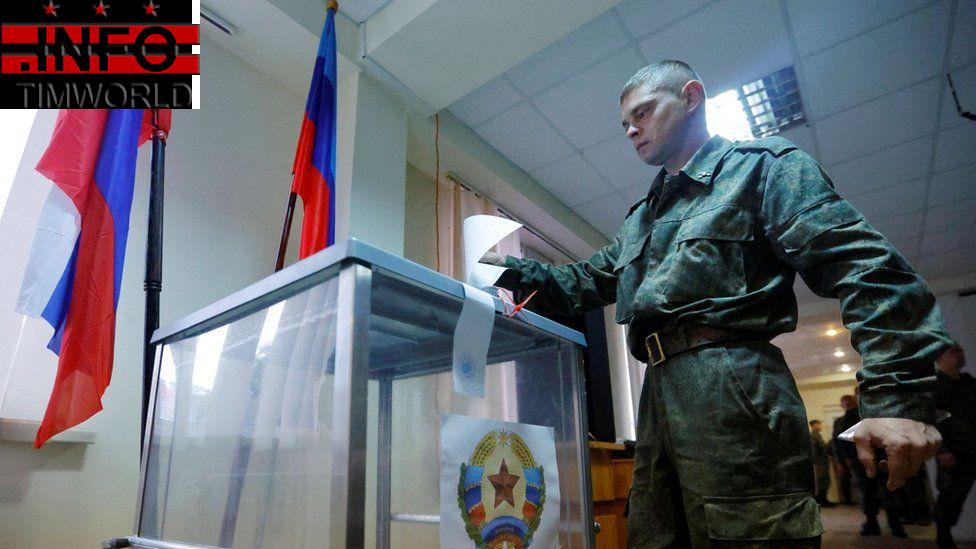 Published2 hours agoSharecloseShare pageCopy linkAbout sharingImage source, ReutersImage caption, Russia allowed the media into some polling stations, including this one in Luhansk, where a soldier cast his vote

Ukrainians have reported armed soldiers going door-to-door in occupied parts of the country to collect votes for self-styled “referendums” on joining Russia.

“You have to answer verbally and the soldier marks the answer on the sheet and keeps it,” one woman in Enerhodar told the BBC.

In southern Kherson, Russian guardsmen stood with a ballot box in the middle of the city to collect people’s votes.

The door-to-door voting is for “security”, Russian state media says.

“In-person voting will take place exclusively on 27 September,” Tass reported. “On the other days, voting will be organised in communities and in a door-to-door manner.”

One woman in Melitopol told the BBC that two local “collaborators” arrived with two Russian soldiers at her parents’ flat, to give them a ballot to sign.

“My dad put ‘no’ [to joining Russia],” the woman said. “My mum stood nearby, and asked what would happen for putting ‘no’. They said, ‘Nothing’.

“Mum is now worried that the Russians will persecute them.”

The woman also said there was one ballot for the entire household, rather than per person.

Although the evidence is anecdotal, the presence of armed men conducting the vote contradicts Moscow’s insistence that this is a free or fair process.

What Russia wants from the votes in occupied Ukraine

Experts say the self-styled referendums, taking place across five days, will allow Russia to claim – illegally – four occupied or partially-occupied regions of Ukraine as their own.

In other words, a false vote on annexation, seven months into Russia’s invasion.

The “annexation” would not be recognised internationally, but could lead to Russia claiming that its territory is under attack from Western weapons supplied to Ukraine, which could escalate the war further.

US President Joe Biden described the referendums as “a sham”, saying they were a “false pretext” to try to annex parts of Ukraine by force in violation of international law.

“The United States will never recognise Ukrainian territory as anything other than part of Ukraine,” he said.

Mr Cleverly said Russia planned to formalise the annexation of the four regions – Luhansk, Donetsk, Kherson and Zaporizhzhia – by the end of the month.

A source in Kherson told the BBC there was no public effort to encourage voting, apart from an announcement on the Russian news agency that people can vote at a port building, which had been disused for 10 years.

Another woman in Kherson said she saw “armed militants” outside the building where the vote seemed to be taking place. She pretended to forget her passport, so she didn’t have to vote.

The woman said all her friends and family were against the referendum. “We don’t know how our life will be after this referendum,” she said. “It is very difficult to understand what they want to do.”

Kyiv says the referendums will change nothing, and its forces will continue to push to liberate all of the territories.

One young Russian man who left St Petersburg for Kazakhstan to avoid the draft told BBC World Service’s Outside Source programme that that most of his friends were also on the move.

“Right now, I feel like it’s a total collapse. I know only maybe one or two folks that don’t think about exile right now,” he said.

He said some, like him, are travelling across the border, whereas others have gone to small Russian villages to hide.

“The big problem of Russia is that we didn’t think about the war in Ukraine in February as we think about it right now,” he said.

Additional reporting by Hanna Chornous and Daria Sipigina in Ukraine

What is being asked in the ‘referendums’?

In the self-declared, unrecognised Luhansk and Donetsk “people’s republics”, people are being asked whether they “support their republic’s accession to Russia as a federal subject”In Zaporizhzhia and Kherson, they are being asked if they “favour the region’s secession from Ukraine, creation of an independent country and subsequent accession to Russia as a federal subject”In Luhansk and Donetsk, ballots are printed in Russian onlyIn Zaporizhzhia and Kherson, the ballot is in Ukrainian and Russian