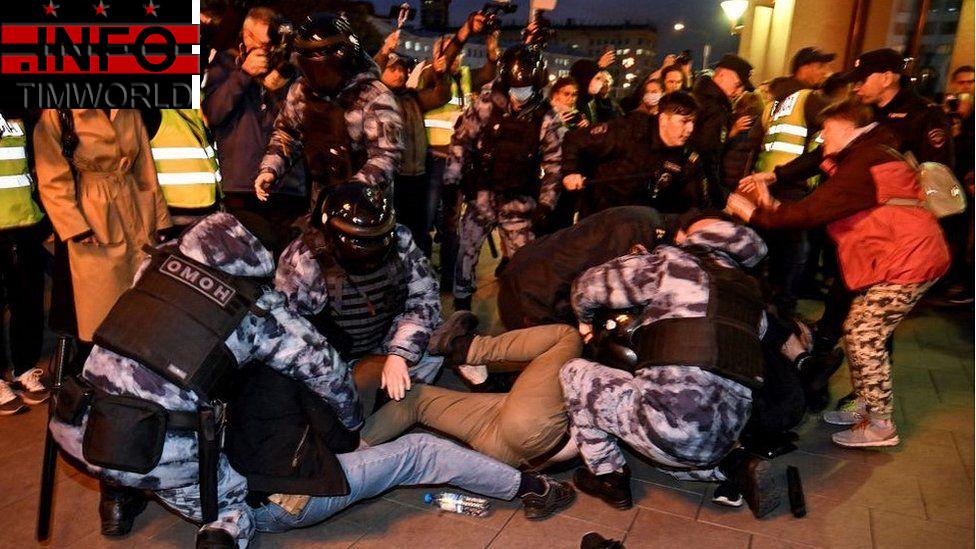 Russian police are reported to have arrested hundreds of protesters rallying against the Kremlin’s decision to call up thousands of extra troops to fight in Ukraine.

Russian human rights group OVD-Info put the total at more than 1,000. The largest numbers arrested were in St Petersburg and Moscow.

Dozens were held in Irkutsk and other Siberian cities, and Yekaterinburg.

Flights out of Russia sold out fast after Vladimir Putin’s announcement.

Russia’s president ordered a partial mobilisation, meaning some 300,000 military reservists – but not conscripts – will be drafted to bolster Russia’s forces who have suffered recent battlefield reverses in Ukraine.

The move came a day after occupied areas of Ukraine announced snap referendums on joining Russia.

And in remarks condemned by Ukraine and its allies, Mr Putin stressed that he would use “all available means” to protect Russian territory – implying this could involve nuclear weapons.

Image source, AFPImage caption, Scuffles broke out in Moscow as police made arrests

The Moscow prosecutor’s office on Wednesday warned that calls on the internet to join unauthorised street protests, or participation in them, could incur up to 15 years in jail. They could be prosecuted under laws against discrediting the armed forces, spreading “fake news” about Russia’s military operation in Ukraine, or encouraging minors to protest.

Russia’s tough penalties for spreading “disinformation” about the Ukraine war and police harassment of anti-Putin activists have made public anti-war protests rare.

But the anti-war opposition group Vesna called for widespread protests, and on Telegram it reported many arrests across Russia. A video clip from Yekaterinburg showed police violently bundling protesters into a bus.

Vesna called its action “no to mogilisation” – a play on words, because “mogila” in Russian means grave.

Pavel Chikov, a lawyer for the Russian human rights group Agora, said Agora had received 6,000 inquiries to its hotline since Tuesday morning, from Russians wanting information about soldiers’ rights.

Meanwhile, flights to popular destinations such as Istanbul in Turkey and Yerevan in Armenia were snapped up, and prices for remaining seats skyrocketed.

The price for flights from Moscow to Istanbul or Dubai reached as high as 9,200 euros ($9,119) for a one-way economy class fare following Mr Putin’s announcement, the Associated Press reported.

‘Absolutely everyone is afraid’

The Kremlin’s mobilisation move follows heavy losses in Ukraine, where Kyiv’s forces have recaptured a huge area east of Kharkiv.

President Putin’s control of the state media has ensured that many Russians support his claim that Ukraine’s “neo-Nazi” government and Nato threaten Russia, and that ethnic Russians in Ukraine have to be defended. In reality Ukraine’s government was democratically elected and has no far right politicians.

The scale of Russian opposition to the Kremlin line on Ukraine is hard to gauge, as media restrictions are so tight.

In Russia, pro-Putin regional governors, who now have to organise the mobilisation, voiced support for it.

“We won’t be weakened, divided or exterminated,” said Ulyanovsk governor Alexei Russkikh. “Our region, like all the others in our country, has a duty to mobilise citizens for military service.”

But young Russian men have told the BBC of their fears about the call-up.

Matvey in St Petersburg said “I was hoping it would never happen”. “Now it’s obvious that Putin won’t step back and he’s going to continue his stupid fight to the last Russian citizen.” He said “I shouldn’t be recruited during this step of mobilisation, but there are no guarantees that things won’t get worse”.

Evgeny, a 31-year-old Russian living in the UK, told the BBC: “Absolutely everyone is afraid, everyone is sending around different information on mobilisation. It is very difficult to figure out what is true and what isn’t. Nobody trusts the government.”