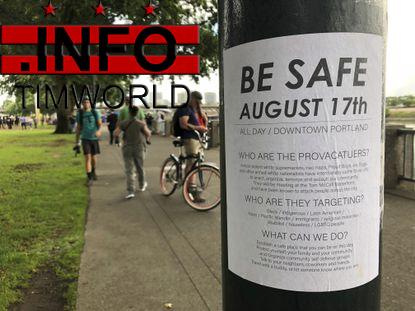 President Trump tweeted support Saturday for the goals of a white nationalist rally in Portland, Ore., that was billed as an effort to get the leftist Antifa group declared a “terror” organization.

Trump suggested he sides with the far right-wing rally’s stated goal to get Antifa banned.

“Major consideration is being given to naming ANTIFA an “ORGANIZATION OF TERROR,” Trump wrote, without explaining why he capitalized some words in his tweet. “Portland is being watched very closely.”

Major consideration is being given to naming ANTIFA an “ORGANIZATION OF TERROR.” Portland is being watched very closely. Hopefully the Mayor will be able to properly do his job!

Trump made no mention or criticism of white nationalists.

There was virtually none of the violence that was feared as far right-wing demonstrators converged on a riverfront park in the famously progressive city. Leftist counter-demonstrators also gathered, but the two sides dispersed with little more than verbal skirmishes.

The right-wing extremists marched in part to demand action against Antifa, which they say attacked them at previous marches that ended in violence. Organizers claimed Trump’s tweet amounted to his implicit endorsement of the rally.

“The President is with the boys today,” a group affiliated with the Proud Boys wrote.

From the Proud Boys Telegram:

“The President is with the boys today.”

And it would appear he is. SMDH. pic.twitter.com/vMO2wuykQA

More than two dozen local, state and federal law enforcement agencies, including the FBI, were on scene hoping to help local police keep the peace.

Portland Police Bureau spokeswoman Tina Jones declined to comment about right-wing claims of bias at the previous marches but said generally police continue to investigate several incidents from the clashes on May 1 and June 29.

DG ISPR refutes claims of amendment to Army Act in Kulbhushan case
Forget about the moon: Donald Trump says NASA should focus on ‘much bigger things’ … like Mars
Suspected ballot harvesting in Maryland undermines public’s faith in our elections