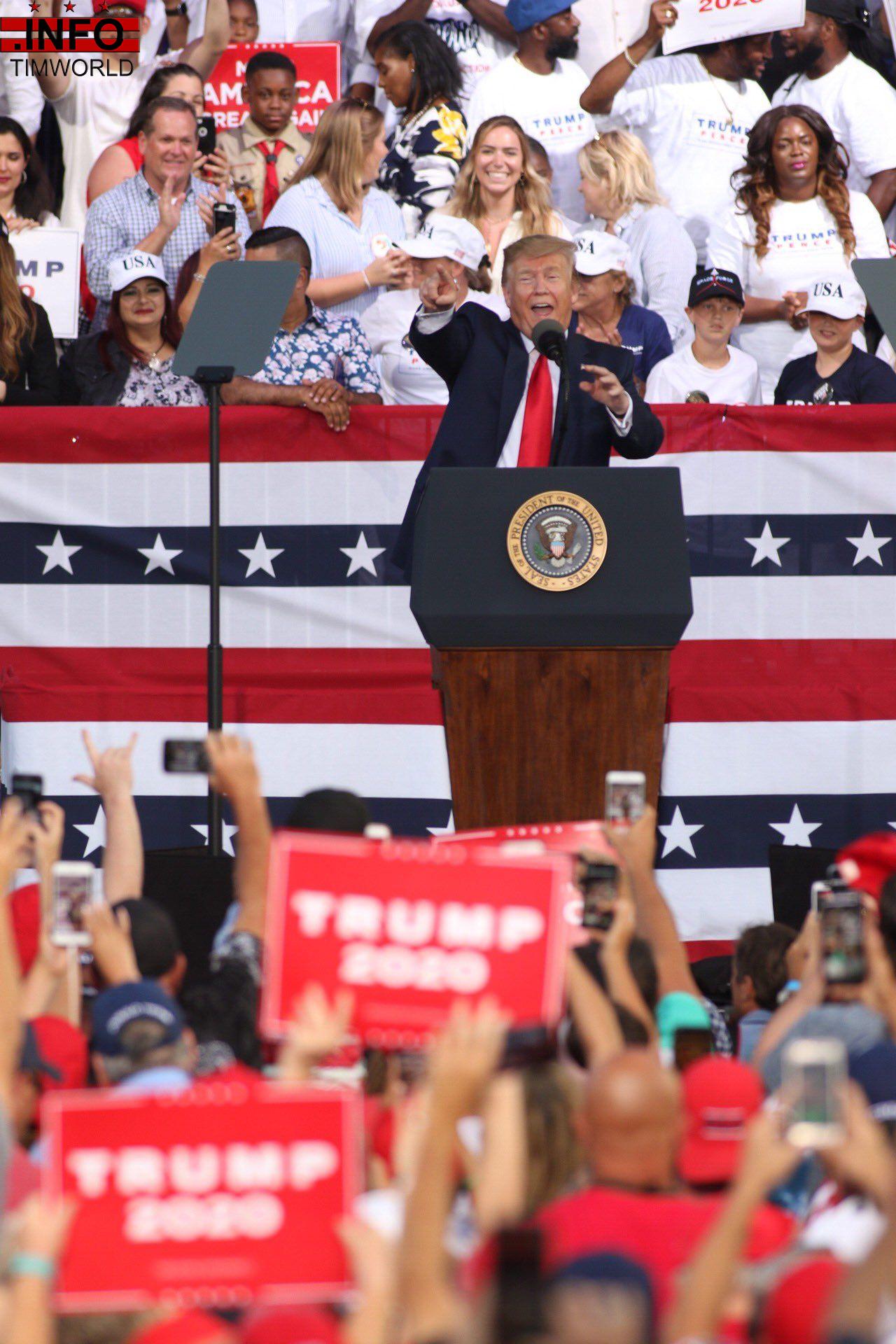 PANAMA CITY BEACH — Standing  before an enthusiastic, loyal crowd of hurricane-ravaged residents, many of whom are still dealing with the aftershock, President Donald Trump said he would do everything he legally could to get more money to the Florida Panhandle.

“You got hit with a little hurricane,” Trump said of the city he visited less than a week after Hurricane Michael struck the Panhandle in October 2018. “Michael was not a nice hurricane, I can tell you that. But we’re doing well.”

Because Michael was reclassified as a Category 5 storm, the federal government will be able to reimburse up to 90 percent of the recovery costs, Trump announced.

“No games, no gimmicks, no delays,” he told the cheering crowd. “We’re just doing it.”

He also announced the administration would give the state $448 million in HUD money to help people rebuild.

“You’re getting your money one way or the other,” Trump told the crowd.

The announcement came at the top of a campaign speech that ran close to 90 minutes and touched on many of the president’s favorite topics. Building a border wall. Getting tough on trade deals with China. The 2020 Democratic presidential candidates. Hillary Clinton. Late-term abortion. Guns. The Economy. Venezuela.

Helping tee up the crowd was Lt. Gov. Jeanette Nuñez, who took the podium as Trump touched down on Marine One.

“The third largest state was on the brink of falling prey to Democratic Socialism,” she said referring to Gov. Ron DeSantis’ narrow victory over then-Tallahassee Mayor Andrew Gillum. “You all made sure that didn’t happen.”

Looking ahead to the 2020 elections, Rep. Matt Gaetz, a staunch Trump ally on Capitol Hill in Washington, said he would “be damned if I’m going to let the lies cooked up in the Obama White House,” promoted by the Deep State and spread by “the lying media” take the 2016 Trump win away.

The idea of anyone trying to “deprive us of this great country we have worked so hard to win back is absurd,” he said, in reference to special counsel Robert Mueller’s probe. “We are going to investigate the investigators and lock them up.”

Trump also used the occasion to criticize congressional Democrats over how much disaster aid is being spent on Puerto Rico for recovery efforts caused by Hurricane Maria in 2017. Trump has been feuding with the island commonwealth’s leaders.

“Puerto Rico got $91 billion, more than any state,” Trump said, repeating a figure that has been proven incorrect. “I understand they don’t like us.”

That is an estimate if Puerto Rico were treated like the 50 states. But the government reported that it has received just over $11 billion from FEMA, and received almost $6 billion of that.

He also blamed Democrats for wanting to give Puerto Rico even more money. Negotiations for a national disaster aid package fell apart over the difference between what Republicans and Democrats wanted to spend on the island territory.

Democrats have pushed back saying that Senate Republicans at Trump’s urging cut $2.6 billion in aid to Florida, including $700 million to rebuild Tyndall Air Force Base which was badly damaged in last year’s hurricane.

Scores of Trump supporters fill the stands at the re-election rally in Panama City, Fla. on Wednesday, May 8, 2019. (Photo: Gregg Pachkowski/[email protected])

To date, Congress has not sent one dime to Florida, 210 days after Hurricane Michael swept a 40-mile path of devastation through the Panhandle. FEMA has allocated $1.4 billion in aid, and the Florida Legislature has kicked in an additional $220 million.

Florida congressional Democrats pounced on the president’s plan to hold his first 2020 political rally in Florida when the federal government has yet to pass a hurricane relief package.

“The bottom line is that the Florida Panhandle does not need a political rally. It needs the Senate to pass and the president to sign some federal government relief,” said Rep. Deborah Wasserman Schultz.

Schultz and Rep. Darren Soto of Orlando lambasted Trump in a conference call with reporters before the president’s scheduled appearance in Bay County. They said Trump’s failure to get a disaster aid package through Congress stems from criticism he received over his handling of Puerto Rico disaster relief.

“President Trump is willing to sacrifice Florida disaster relief to further his personal agenda against Puerto Rico,” said Soto. “And we know the basis for it – his failed disaster relief leading to the highest death toll in modern history after Hurricane Maria.”

Democrats plan to vote this week on a $17.2 billion disaster relief bill. The package is $3 billion larger than one that was approved in January but later stalled. The additional money would help pay for damage caused by natural disasters that have hit this year.

Florida politicians hinted at the president’s announcement in the days leading up to the rally. After he was sworn in in January, Gov. Ron DeSantis said he asked for two things from the president — expanding the window for reimbursement claims for debris removal from five days to 45 days, and raising the reimbursement rate from 75 percent to 90 percent.

About 90 minutes before Trump took the stage, Sen. Marcio Rubio, R-Fla., tweeted out that he had a great chat with the president on the flight to Florida, about disaster relief for Florida, including on timber, Tyndall Air Force Base and the 90/10 split.

Gaetz, R-Pensacola, who is under investigation by The Florida Bar over a tweet he posted that was directed at Trump’s former personal lawyer Michael Cohen, told a reporter before Trump’s appearance that he didn’t want to steal the president’s scoop.

“I think the president is going to make a major announcement,” Gaetz said.

Before arriving at the waterfront Aaron Bessant Park where Trump’s rally was held, Gaetz, Trump, DeSantis, Rubio and others toured Tyndall to see all the devastation.

“It was important for the president to see the devastation at Tyndall,” Gaetz said. “We were able to get a briefing of the uniqueness of the mission and the need to rebuild.”

Trump vowed that the base would come back “better than ever before” with “a lot of new buildings” and F-35 planes.

“So they were going to close the base and I said ‘no,’ Trump said.

The rally ended with fireworks as the Rolling Stones song played: “You can’t always get what you want.”

Scores of Trump supporters fill the stands at the re-election rally in Panama City, Fla. on Wednesday, May 8, 2019. (Photo: Gregg Pachkowski/[email protected])