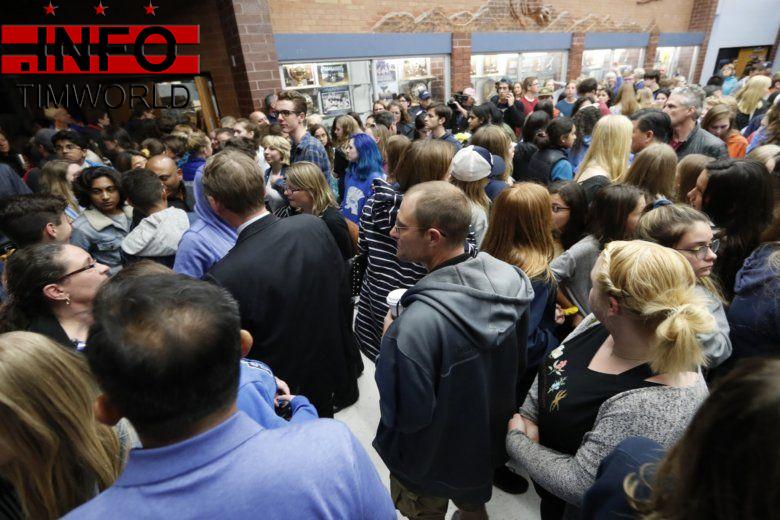 HIGHLANDS RANCH, Colo. (AP) — The Latest on the shooting at a Colorado school that killed one student and injured eight (all times local):

Organizers of a vigil for victims and survivors of the Colorado school shooting that killed a student and injured eight are apologizing after students complained the event politicized the tragedy and ignored them.

At one point, someone shouted that students should be allowed to speak and organizers talked with students in a hallway about how to include them.

Some students chanted and others railed against the media and called for remembering Kendrick Castillo, the student killed while trying to stop one of the gunman Tuesday.

Students eventually were invited to speak.

Teacher Emily Muellenberg told Colorado Public Radio that organizers had reached out to students before the event but didn’t hear back.

The three students who disarmed a gunman in a Colorado school shooting leapt their desks without a word and with no thought for their own safety when they spotted the gun.

One of the three recounted how they slammed the teenager against the wall and struggled with him when shots rang out. Kendrick Castillo led the charge but slumped to the ground.

His close friend Brendan Bial wrestled the gun away and called to Castillo.

Bialy told reporters there was no response as he recalled what happened at STEM School Highlands Ranch.

Bialy said his friend Kendrick “went out as a hero.”

Authorities said the actions of Castillo, Bialy and Joshua Jones minimized bloodshed from Tuesday’s attack at the school south of Denver that wounded eight students and killed the 18-year-old Castillo.

The attackers were identified as 18-year-old Devon Erickson and a 16-year-old who prosecutors identified as Maya McKinney but whose attorney said uses male pronouns and the name Alec.