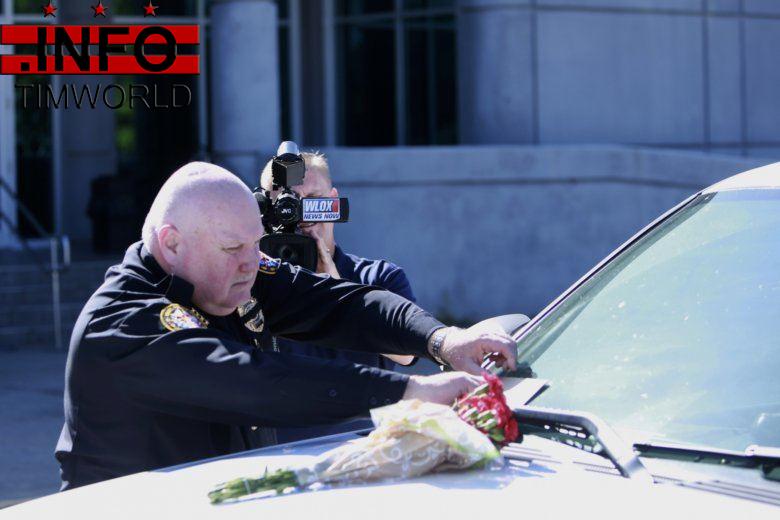 BILOXI, Miss. (AP) — The Latest on the killing of a Mississippi police officer (all times local):

Hundreds of Mississippi residents are remembering a Biloxi police officer shot to death.

People gathered Tuesday outside the police station, steps away from where Patrolman Robert McKeithen was gunned down Sunday night in the parking lot.

Mourners included McKeithen’s widow and several other family members, who held hands through most of the ceremony but didn’t speak.

Biloxi Police Chief John Miller thanked people who piled flowers and other tributes on McKeithen’s SUV for “showing their love for us.”

Darian Atkinson remains jailed without bail after the 19-year-old’s arrest Monday on a capital murder charge. His 21-year-old brother was booked into jail early Tuesday on a charge of being an accessory to the crime. Both men are expected to appear before a judge Wednesday morning.

The mother of a man accused of killing a Mississippi Gulf Coast police officer says her son is “not a thug.”

Broger says Atkinson went to Texas for work and came back “a completely different person.” She says she’s had to call police several times. She says officers told her there was nothing they could do because Atkinson wasn’t hurting anyone.

Atkinson was arrested Monday and charged with capital murder in the Sunday night shooting of McKeithen outside the Biloxi police station. He’s jailed without bail.

Broger denies that her older son Davian Atkinson did anything to merit his arrest for being an accessory to the crime. Broger says Darian Atkinson came home Sunday night when the family didn’t know about the shooting and left Monday in Davian Atkinson’s car.

A Mississippi NAACP leader says his goddaughter was threatened with death last year by the man who’s now accused of fatally shooting a Biloxi police officer.

Crowell held a news conference at the time, saying parents should have been notified. WXXV-TV reported then that the accused student, who was never named publicly, was suspended for three days.

Atkinson is charged with capital murder in the Sunday shooting death of Biloxi Patrolman Robert McKeithen. He’s jailed without bail after his Monday arrest.

The brother of a man accused of gunning down a police officer is accused of aiding him.

The younger brother was arrested Monday and is charged with capital murder in the Sunday night shooting death of Biloxi Patrolman Robert McKeithen.

Police say Darian Atkinson shot McKeithen dead in the parking lot of the Biloxi police station. He was arrested Monday evening in Wiggins and escorted back into the same police station.

Neither brother has seen a judge yet and it’s unclear if either has a lawyer. Online jail records show bail set at $500,000 for Davian Atkinson. No bail is listed for Darian Atkinson.

Police in Mississippi are feeling vindicated after capturing a teenager accused of gunning down a uniformed officer at a police station.

Biloxi citizens applauded Monday night as 19-year-old Darian Tawan Atkinson was returned to the scene of the crime in handcuffs.

Police said Atkinson walked around inside the station Sunday night before shooting Biloxi Patrolman Robert McKeithen in the parking lot.

Atkinson smiled as he was escorted through a phalanx of television cameras and police officers.

Biloxi Police Chief John Miller said officers “feel vindicated. He’s been treated properly and fairly. And now we will grieve for the family.”

McKeithen’s death leaves a wife and four children without him. He had been planning to retire this year.