Suspect out of jail after 1,000 guns seized from LA mansion 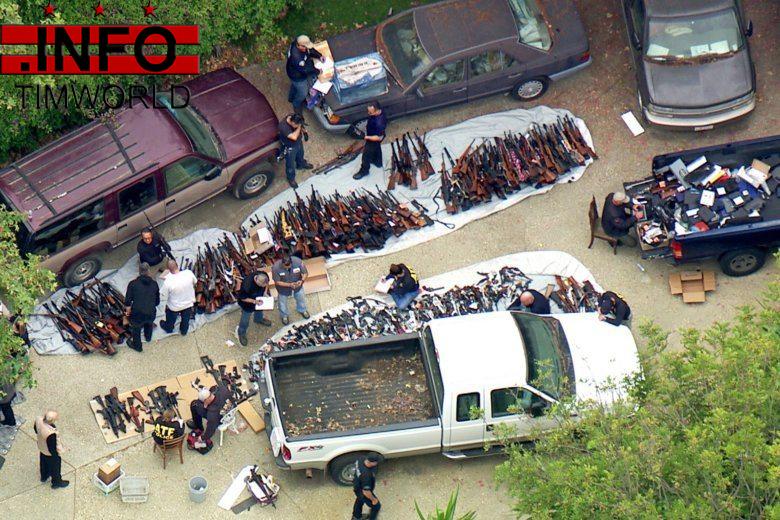 LOS ANGELES (AP) — A 57-year-old man was released Thursday on bond a day after his arrest during a law enforcement raid on a Los Angeles mansion that uncovered more than 1,000 guns, according to jail records.

Girard Saenz was arrested on suspicion of unlawful transportation and of giving, lending or selling an assault weapon, the Los Angeles Times reported. It wasn’t known if Saenz has an attorney, and a message left at a number for him was not returned.

Acting on a tip regarding illegal firearms sales, police and federal agents served a search warrant before dawn Wednesday at the home valued at millions of dollars in the posh Bel Air neighborhood.

Photos and video from the scene showed stacks of rifles, shotguns, assault weapons and pistols laid out in the driveway. Others showed a floor stacked with boxes of ammunition.

The weapons will be itemized and booked into evidence, police Lt. Chris Ramirez said.

“I had never seen so many weapons in my career of 31 years,” Ramirez said. “That’s such a big arsenal in a residence like this, in this type of neighborhood. It’s astounding.”

The federal Bureau of Alcohol, Tobacco, Firearms and Explosives said in a statement that authorities received a tip about a person “conducting illegal firearms transaction outside the scope of the federal firearm license” that the person possessed.

Saenz is a longtime companion of real estate mogul Cynthia Beck, who owns the property and many others in California, according to records cited by the Times.

Beck has three daughters with J. Paul Getty’s son Gordon Getty, the newspaper said. Beck bought the house in January 2001, but it remains unclear what, if any, connection she has to Wednesday’s events.

It is unclear whether Beck lives at the home where the weapons were found. She could not be reached for comment.

Saenz has been a licensed general building contractor since 1994 and operates a business in San Diego called Gerry Saenz and Associates, according to public records.

Saenz was arrested in Malibu at a home on suspicion of brandishing a firearm in 2017, but the matter was not considered for charges after the alleged victims told deputies they did not want to pursue it, a sheriff’s spokesman told the Times. Saenz was released within a few hours of being detained.