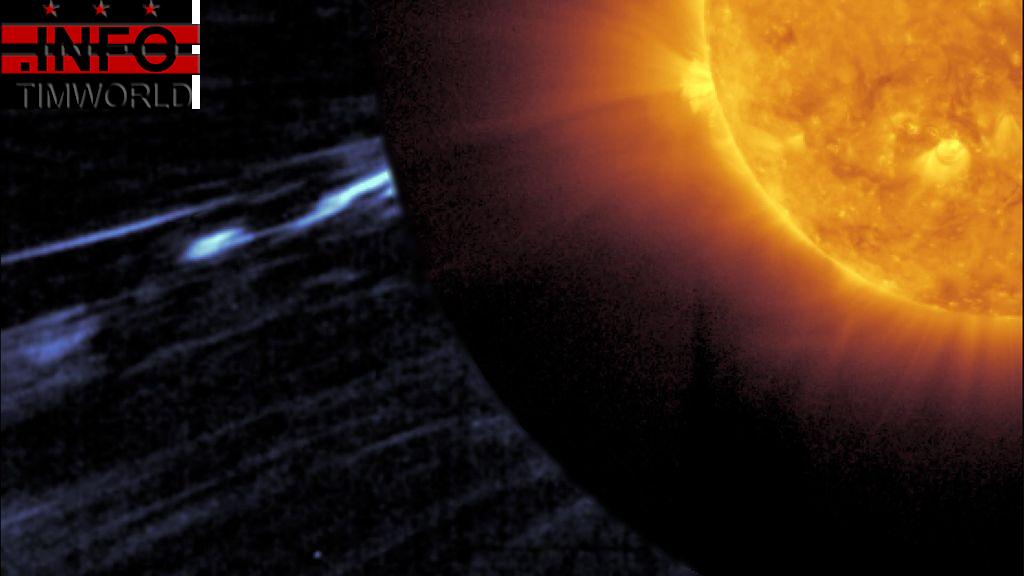 A magnetic phenomenon known as solar switchbacks has been imaged by the ESA/NASA Solar Orbiter spacecraft for the first time. The image zooms in on the switchback (blue/white feature extending towards the left) as captured in the solar corona by the Metis instrument on March 25, 2022. The switchback appears to be linked to the active region seen in the central Extreme Ultraviolet Imager image (right). Credit: ESA & NASA/Solar Orbiter/EUI & Metis Teams and D. Telloni et al. (2022)

With fresh data from its closest pass of the Sun thus far, the ESA/Solar Orbiter has made the first-ever remote sensing observation consistent with a magnetic phenomenon called a solar switchback – sudden and large deflections of the solar wind’s magnetic field. The new observation provides a full view of the structure, confirming it has an S-shaped character, as predicted. Moreover, the global perspective provided by the Solar Orbiter data indicates that these rapidly changing magnetic fields can have their origin near the surface of the Sun.

A close-up view of the Solar Orbiter Metis data turned into a movie shows the evolution of the switchback. The sequence represents around 33 minutes of data taken on March 25, 2022. The bright structure forms while propagating outwards from the Sun. As it reaches its full development it bends back on itself and acquires the distorted S-shape characteristic of a magnetic switchback. The structure expands at a speed of 80 km/s but the whole structure does not move at this speed. Instead, it stretches and distorts. This is the first time a magnetic switchback has ever been observed remotely. All other detections have taken place when spacecraft have flown through these disturbed magnetic regions. Credit: ESA & NASA/Solar Orbiter/Metis Teams; D. Telloni et al. (2022)

Although a number of spacecraft have flown through these puzzling regions before, in situ data only allow for a measurement at a single point and time. As a consequence, the structure and shape of the switchback has to be inferred from

These magnetic structures were also probed at much larger distances from the Sun by the Ulysses spacecraft in the late 1990s. Instead of a third of the Earth’s orbital radius from the Sun, where the Helios missions made their closest pass, Ulysses operated mostly beyond the Earth’s orbit.

How a solar switchback is formed infographic. Solar Orbiter has made the first ever remote sensing observation of a magnetic phenomenon called a solar ‘switchback’, proving their origin in the solar surface and pointing to a mechanism that might help accelerate the solar wind. Credit: ESA & NASA/Solar Orbiter/EUI & Metis Teams and D. Telloni et al. (2022); Zank et al. (2020)

Their number rose dramatically with the arrival of NASA’s Parker Solar Probe in 2018. This clearly indicated that the sudden magnetic field reversals are more numerous close to the Sun, and led to the suggestion that they were caused by S-shaped kinks in the magnetic field. This puzzling behavior earned the phenomenon the name of switchbacks. A number of ideas were proposed as to how these might form.

On March 25, 2022, Solar Orbiter was just a day away from a close pass of the Sun – bringing it within the orbit of planet Mercury – and its Metis instrument was taking data. Metis blocks out the bright glare of light from the Sun’s surface and takes pictures of the Sun’s outer atmosphere, known as the corona. The particles in the corona are electrically charged and follow the Sun’s magnetic field lines out into space. The electrically charged particles themselves are called a plasma.

The Sun as seen by the ESA/NASA Solar Orbiter spacecraft on March 25, 2022, one day before its closest approach of about 0.32 au, which brought it inside the orbit of planet Mercury. The central image was taken by the Extreme Ultraviolet Imager (EUI) instrument. The outer image was taken by the coronagraph Metis, an instrument that blocks out the bright light of the Sun’s surface in order to see the Sun’s faint outer atmosphere, known as the corona. The Metis image has been processed to bring out structures in the corona. This revealed the switchback (the prominent white/light blue feature at the roughly 8 o’clock position in the lower left). It appears to trace back to the active region on the surface of the Sun, where loops of magnetism have broken through the Sun’s surface. Credit: ESA & NASA/Solar Orbiter/EUI & Metis Teams and D. Telloni et al. (2022)

At around 20:39 UT, Metis recorded an image of the solar corona that showed a distorted S-shaped kink in the coronal plasma. To Daniele Telloni, National Institute for Astrophysics – Astrophysical Observatory of Torino, Italy, it looked suspiciously like a solar switchback.

Comparing the Metis image, which had been taken in visible light, with a concurrent image taken by Solar Orbiter’s Extreme Ultraviolet Imager (EUI) instrument, he saw that the candidate switchback was taking place above an active region cataloged as AR 12972. Active regions are associated with sunspots and magnetic activity. Further analysis of the Metis data showed that the speed of the plasma above this region was very slow, as would be expected from an active region that has yet to release its stored energy.

Daniele instantly thought this resembled a generating mechanism for the switchbacks proposed by Prof. Gary Zank, from the University of Alabama in Huntsville, USA. The theory looked at the way different magnetic regions near the surface of the Sun interact with each other.

ESA’s Solar Orbiter has solved the mystery of a magnetic phenomenon in the solar wind. It has taken the first-ever image of a ‘switchback’ in the solar corona, confirming its predicted ‘S’ shape. A switchback is defined by rapid flips in the magnetic field direction. The observed switchback is linked to an active region associated with sunspots and magnetic activity where there is an interaction between open and closed magnetic field lines. The interaction releases energy and sends the S-shaped disturbance into space. The new data suggest that switchbacks could originate near the solar surface, and may be important in understanding the acceleration and heating of the solar wind. Credit: ESA

Close to the Sun, and especially above active regions, there are open and closed magnetic field lines. The closed lines are loops of magnetism that arch up into the solar atmosphere before curving round and disappearing back into the Sun. Very little plasma can escape into space above these field lines and so the speed of the solar wind tends to be slow here. Open field lines are the reverse, they emanate from the Sun and connect with the interplanetary magnetic field of the Solar System. They are magnetic highways along which the plasma can flow freely, and give rise to the fast solar wind.

Daniele and Gary proved that switchbacks occur when there is an interaction between a region of open field lines and a region of closed field lines. As the field lines crowd together, they can reconnect into more stable configurations. Rather like cracking a whip, this releases energy and sets an S-shaped disturbance traveling off into space, which a passing spacecraft would record as a switchback.

Metis observation of the switchback is consistent with the sound theoretical mechanism for the production of solar magnetic switchbacks proposed in 2020 by Prof. Gary Zank. The key observation was that the switchback could be seen emanated from above a solar active region. This sequence shows the chain of events that the researchers think is taking place. (a) Active regions on the Sun can feature open and closed magnetic field lines. The closed lines arch up into the solar atmosphere before curving round back into the Sun. The open field lines connect with the interplanetary magnetic field of the Solar System. (b) When an open magnetic region interacts with a closed region, the magnetic field lines can reconnect, creating an approximately S-shape field line and producing a burst of energy. (c) As the field line responds to the reconnection and the release of energy, a kink is set propagating outwards. This is the switchback. A similar switchback is also sent in the opposite direction, down the field line, and into the Sun. Credit: Zank et al. (2020)

According to Gary Zank, who proposed one of the theories for the origin of switchbacks, “The first image from Metis that Daniele showed suggested to me almost immediately the cartoons that we had drawn (see image above) in developing the mathematical model for a switchback. Of course, the first image was just a snapshot and we had to temper our enthusiasm until we had used the excellent Metis coverage to extract temporal information and do a more detailed spectral analysis of the images themselves. The results proved to be absolutely spectacular!”

Together with a team of other researchers, they built a computer model of the behavior, and found that their results bore a striking resemblance to the Metis image, especially after they included calculations for how the structure would elongate during its propagation outwards through the solar corona.

“I would say that this first image of a magnetic switchback in the solar corona has revealed the mystery of their origin,” says Daniele, whose results are published in a paper in The Astrophysical Journal Letters.

“The next step is to try to statistically link switchbacks observed in situ with their source regions on the Sun,” says Daniele. In other words, to have a spacecraft fly through the magnetic reversal and be able to see what’s happened on the solar surface. This is exactly the kind of linkage science that Solar Orbiter was designed to do, but it does not necessarily mean that Solar Orbiter needs to fly through the switchback. It could be another spacecraft, such as Parker Solar Probe. As long as the in-situ data and remote sensing data is concurrent, Daniele can perform the correlation.

“This is exactly the kind of result we were hoping for with Solar Orbiter,” says Daniel Müller, ESA Project Scientist for Solar Orbiter. “With every orbit, we obtain more data from our suite of ten instruments. Based on results like this one, we will fine-tune the observations planned for Solar Orbiter’s next solar encounter to understand the way in which the Sun connects to the wider magnetic environment of the Solar System. This was Solar Orbiter’s very first close pass to the Sun, so we expect many more exciting results to come.”