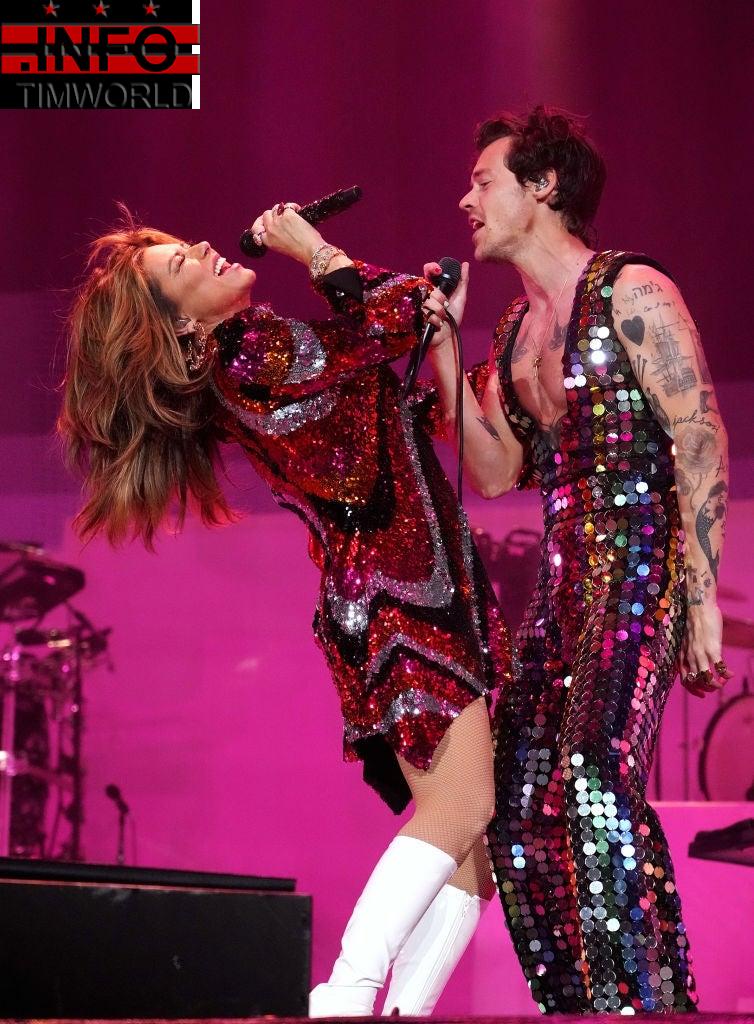 Shania Twain is all for doing a duet with Harry Styles. ET’s Cassie DiLaura is with the iconic country star in Las Vegas, and Twain shares that she’s definitely down to put out a song with the One Direction alum after her surprise appearance during his Coachella set earlier this year.

“We just have to ask. I have never asked him so. I just have to officially ask Harry,” she tells ET, adding that she does “expect him to say yes” when she floats the idea.

While fans may have to wait a bit for a Styles/Twain duet to become a reality, the latter singer is holding them with her new single, “Waking Up Dreaming,” which is out now.

“This particular song is just so fun. I’m a real day dreamer and this is how the idea came up,” she says. “… When you’re asleep and you wake up and you go, ‘Oh, I just wanna go back to sleep, so I can enter that dream again and maybe change the ending,’ [and] you’re just enjoying that dreaming. I enjoy day dreaming. I enjoy getting lost in my dreams and escaping in them, day or night.”

As for her album, which is still in the works, Twain says she “had so much fun making” it.

“I did more collaborating than I’ve ever done before in my career with the songwriting, so I’ve enjoyed sharing that space with other creatives,” she adds.

That fact makes her excited to get on the road and tour her new material.

Amid all the ups and downs of her personal life Twain tells ET that “music healing me… has come right from the very beginning of my childhood.”

“When I needed to escape, there’s no dinner in the house, I’m hungry, I got to [put] mind over matter, grab my guitar, go out in a bush and just write music until it’s time for bed. If there was violence in the house, [it was the] same thing,” she recalls. “Head out somewhere where I could be alone and not hear it and just get locked into my creative self and just disappear. Music was that escape.”

Many of her tumultuous times are shown in her Netflix documentary, Not Just a Girl, a project that was years in the making.

“It took a lot of thought and a lot of time… I wanted to share things that people probably wouldn’t know about me that would make it interesting. Getting a hold of a lot of the archival photos and videos was difficult,” she says. “… There was a lot of contemplation too about what to share and what not to share. I think with more time I became more and more comfortable sharing my most personal elements, as far as a music documentary goes.”

As her personal life influences much of her music, everything from her poverty during childhood, her parents’ deaths, her health struggles, and her 2010 divorce from Robert “Mutt” Lange was included in the doc.

“Anywhere where there was a personal crisis that created a shift in my career was included as part of that explanation,” she shares. “The obvious ones being, first of all, the poverty in my life, which was really a huge part of my musical development and how that developed in my life, and also being very isolated with that… The death of my parents, which was a crossroads of, ‘Do I quit altogether, get a real job, then be able to feed the kids and survive?'”

“The next one was losing my voice through… getting a divorce,” Twain adds. “… They were sort of happening simultaneously, both very devastating, obviously, to my career, both directly affecting my career and the changes and the directions it would take.”

One of those directions led Twain straight to Las Vegas, where she put on Let’s Go! The Las Vegas Residency on-and-off at Zappos Theater at Planet Hollywood Resort and Casino since 2019. She played her final show of the residency earlier this month.

“I do feel like I have a lot of mixed feelings about it. I will miss it,” Twain tells ET of her Vegas show. “All I can do is plan to come back and make it part of my life again, but there’s a lot going on.”

Miranda Lambert is stepping into Twain’s shoes for her own residency, Velvet Rodeo The Las Vegas Residency, which will kick off later this month.

“Put your boots on and come out here to kick some a**. Have fun. It’s a very fun room and Las Vegas is really great,” Twain advises Lambert. “Even when you don’t have a show, there’s always other artists to connect [with], and sports games going on. I’m never bored here, so I can’t imagine you’ll ever be bored here, Miranda.”

As for what she has learned throughout her storied career and wants to pass on to the next generation, Twain tells ET, “You have to roll with what is inevitably going to be a lot of punches.”

Wilmer Valderrama Gets Engaged to Model Amanda Pacheco: Pics!
Chris Cuomo Jokes His House Is Like ‘Lord of the Flies’ for His Kids As He and Wife Battle COVID-19
Jordyn Woods Seemingly Responds to Khloe Kardashian’s Peace Message