Russia hits Ukraine with another deadly wave of "suicide drones" 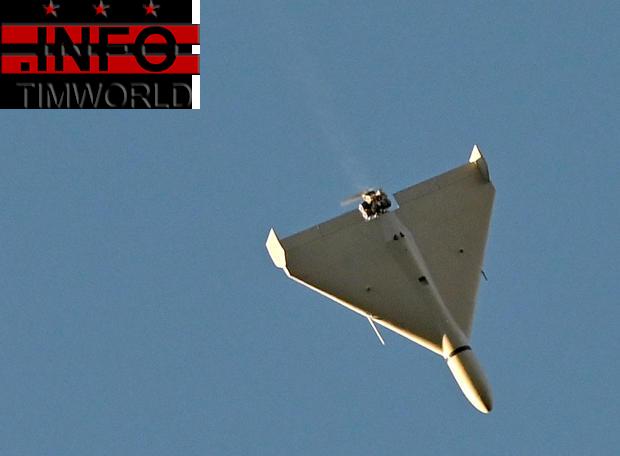 Russia has repeatedly denied targeting civilians in Ukraine, but as CBS News senior foreign correspondent Holly Williams reported, one of the neighborhoods hit in Kyiv on Monday is packed with apartment buildings, schools and restaurants.

Apartment blocks and a non-residential building were on fire in the capital’s central Shevchenko district, Kyiv Mayor Vitali Klitschko said, adding that at least one person was killed and another believed to be trapped under the debris of a residential building. Ukraine’s Interior Minister, Denys Monastyrskyi, said later that “several” people were killed in the Russian strikes on cities across the country, but he didn’t provide any details.

A drone flies over Kyiv during an attack on October 17, 2022, amid the Russian invasion of Ukraine. SERGEI SUPINSKY/AFP/Getty

News photographers caught images of at least one of the drones as it flew into Kyiv, with triangle-shaped wings and a pointed warhead clearly visible against the blue sky. Drones came in several waves and buzzed overhead with angry hums from their engines.

Russian strikes over the past week have hit apartment buildings and other civilian infrastructure, but also targeted infrastructure, including power facilities. Ukrainian Prime Minister Denys Shmygal said the strikes on Monday hit critical energy infrastructure in three regions, knocking out electricity to hundreds of towns and villages.

“Russian terrorists once again attacked the energy infrastructure of Ukraine in three regions,” Shmygal said, noting five strikes in Kyiv, in addition toi attacks in the Dnipropetrovsk and Sumy regions. “Hundreds of settlements were cut off as a result of the attack,” he said.

Social media video posts showed drones buzzing over the capital and smoke billowing in the early morning light. The sound of sustained gunfire could also be heard in one post, seemingly trying to shoot a drone down.

Residents and police run after a drone attack in Kyiv, Ukraine, October 17, 2022, amid the Russian invasion of Ukraine. SERGEI SUPINSKY/AFP/Getty

Explosions were heard from the same central Kyiv district where a missile strike a week ago tore a hole in a children’s playground.

Andrii Yermak, the head of the Ukrainian president’s office, wrote in a post on the Telegram social media site that Russian forces struck Kyiv with Iranian Shahed drones.

Russia has repeatedly been using the so-called suicide drones in recent weeks to target urban centers and infrastructure, including power stations.

“The Russians think it will help them, but it shows their desperation,” he said, according to AFP.

“All night and all morning, the enemy terrorizes the civilian population,” Ukraine’s President Volodymyr Zelenskyy said Monday. “Kamikaze drones and missiles are attacking all of Ukraine. The enemy can attack our cities but it won’t be able to break us.”

Strikes in central Kyiv became a rarity in the last several months after Russian forces failed to capture the capital in the beginning of the war. Last week’s early morning strikes were the first explosions heard in Kyiv’s city center in several months and put Kyiv as well as the rest of the country back on edge as the war nears the nine month mark.

Monday’s blasts seemed to continue what many fear could become more common occurrences in urban centers.

Russian President Vladimir Putin said last week’s strikes were in retaliation for the bombing of a bridge connecting the Crimean peninsula with the Russian mainland. Putin blames Ukraine for masterminding the blast, which suspended traffic over the bridge and curtailed Moscow’s ability to use the bridge to supply Russian troops in the occupied regions of southern Ukraine.

The strike on Kyiv comes as fighting has intensified in the eastern regions of Donetsk and Luhansk in recent days, as well as the continued Ukrainian counteroffensive in the south near Kherson and Zaporizhzhia.

Zelenskyy said in his evening address Sunday that there was heavy fighting around the cities of Bakhmut and Soledar in the Donetsk region. The Donetsk and Luhansk regions make up the bulk of the industrial east known as the Donbas, and were two of four regions annexed by Russia in September in defiance of international law.

On Sunday, the Russian-backed regime in the Donetsk region said Ukraine had shelled its central administrative building in a direct hit. No casualties were reported.

Ukrainian refugees told not to return this winter because energy networks "will not cope"
Zelensky hails advances as open recriminations intensify in Russian media
Ukraine war: Russians ‘outnumbered 8-1’ in counter-attack