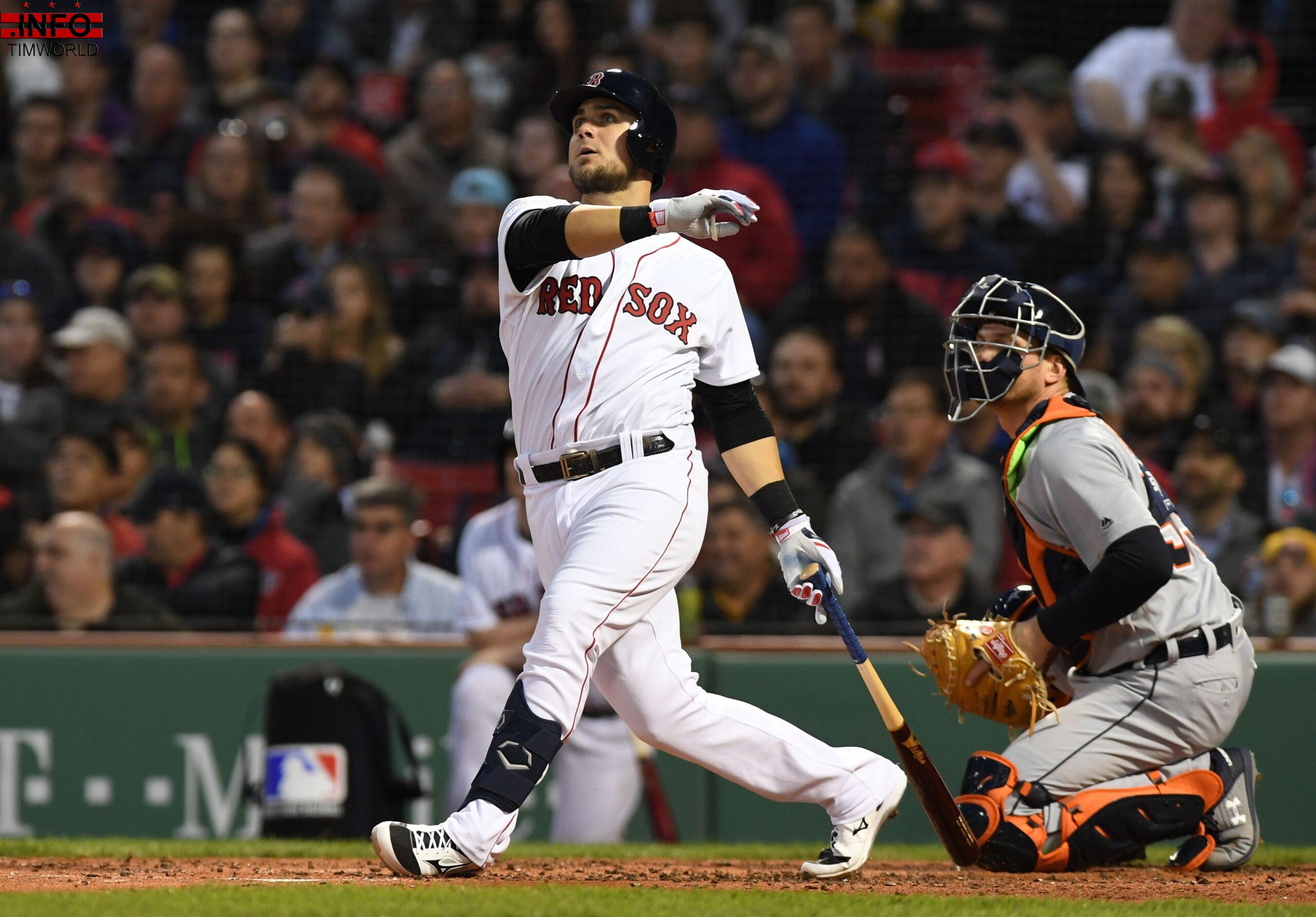 BALTIMORE – He is the wide-eyed one in the Boston Red Sox clubhouse, one of the few without a 2018 championship ring, but hardly lacking a glow in his first days as a major leaguer.

It’s easy, then, to consider Michael Chavis the young guy in a veteran room.

Yet on a Red Sox club where at the moment, seven of their nine everyday players are homegrown, Chavis is closer to middle age.

At 23, he’s actually a year older than third baseman Rafael Devers, who debuted in July 2017. He’s just a year younger than All-Star left fielder Andrew Benintendi, who joined the big club in 2016.

And the nucleus of this bunch, reigning AL MVP Mookie Betts, is still just 26, the same age as shortstop Xander Bogaerts, who dates all the way back to their World Series titlists of 2013.

Though it’s been just 17 games, Chavis looks very much like the next long-term relationship Boston establishes with one of its young players – and not just because Chavis has an otherworldly .423 on-base percentage and six home runs in 58 at-bats, most of them of the prodigious variety.

“I’m definitely lucky to be here,” Chavis says, and then pauses a moment.

He wants to clarify the emphasis on that last word – here, as in with the Red Sox, and not merely here as in merely making the big leagues.

Chavis feels he’s earned that distinction through five years of toil and steady progress through Boston’s farm system. That determination and focus, paired with elite bat speed, had Boston’s amateur scouting department drooling when Chavis was a high school senior in Marietta, Ga.

TRUMP: Red Sox should have just avoided the White House

As the story goes, one cross-checker was so smitten with Chavis, and so certain the Red Sox, with the 26th pick in 2013, would jump on Chavis that he promised to do the worm through the halls of their offices if it came to pass.

The scouts got their show – the cross-checker in question goes about 5-10, 255 pounds – and the Red Sox soon had another prospect pounding his way through their system.

The 2019 arrival came sooner than anticipated. Pedroia’s unfortunate saga with a surgically repaired knee shelved him after six games and Holt succumbed to shoulder inflammation in April.

Chavis’ impact was felt almost immediately, thanks to what he might consider his two best attributes.

“Quick hands,” he says in assessing himself, “and a strong lower half.”

Chavis, with a fireplug build at 5-10, 215 pounds, sent his first career home run 441 feet into the night at Fenway Park on April 24. It was the longest home run hit by a Red Sox this season, at least until Chavis ripped a 459-foot shot 10 days later off Chicago White Sox starter Reynaldo Lopez.

He’s so far enhanced their second-base production, his four home runs coming in 58 at-bats, while other Red Sox second basemen produced one home run in 86 at-bats.

“We really had a big void – Pedroia’s hurt, Holt’s hurt, (Eduardo) Nunez is hurt, and all of a sudden he comes in and gives you some really good offensive production out of it,” says Red Sox general manager Dave Dombrowski. “That’s a tremendous pickup.”

His instant offense and acclimation dovetails with those who came before him. Bogaerts, Betts, Benintendi and Devers were almost immediate core contributors. Now they, along with true veterans like J.D. Martinez and Steve Pearce, are showing Chavis what it means to be a big leaguer.

“I don’t think many guys can come up and say, the reigning MVP is looking out for them, and talking about hitting and everything. It’s definitely nothing I’m going to take for granted,” says Chavis. “Everybody’s done a great job making me feel comfortable here, and (Betts) definitely one of the most.

“I think I learned more in these two and a half, three weeks than I did the entire season last year. It really is just a little bit different up here – how things are run in the clubhouse, how the game is played.

In return, the Red Sox get a fresh face to brighten up a title defense that began in ominous fashion, with eight losses in their first 10 games. To be certain, the turnaround can be largely attributed to improved starting pitching from Rick Porcello, Chris Sale and David Price.

Dropping a kid who doesn’t know any better into the fray can’t help but lighten things up.

“There’s always that youthful enthusiasm that a lot of us take for granted – the way you travel, the food you eat, the hotels you stay in, the life you lead,” says Dombrowski. “When a youngster comes in like that, you’re wide-eyed. There’s a fun that’s attached to that.

“Kind of like when Devers came up a couple years ago, Benintendi the year before that.”

While those guys are still finding their way, they played a large role in establishing the Red Sox’s culture of assimilating and accommodating younger players.

“I’m a big believer that we treat everybody with respect, and they’re important to us,” says manager Alex Cora. “To come here and communicate with him and talk to him and make sure he’s a part of it is very important.”

Says Benintendi: “It doesn’t matter how many years you have; if you help the team win, everybody’s going to be happy.”

At this point, Chavis is only hoping to turn his days into weeks and, hopefully, months. Should he keep hitting, it’s hard to imagine a minor-league return once Holt – who’s expected to begin working out with the club this weekend in Boston – is back. Chavis definitely has versatility on his side, with extensive experience at first, second and third base in the minor leagues.

For now, he is absorbing all he can.

“I just see everybody in here as more experienced than me,” he says, “and I’m trying to learn as much as I can.”

It may not be long before Chavis is one of the old hands, himself.