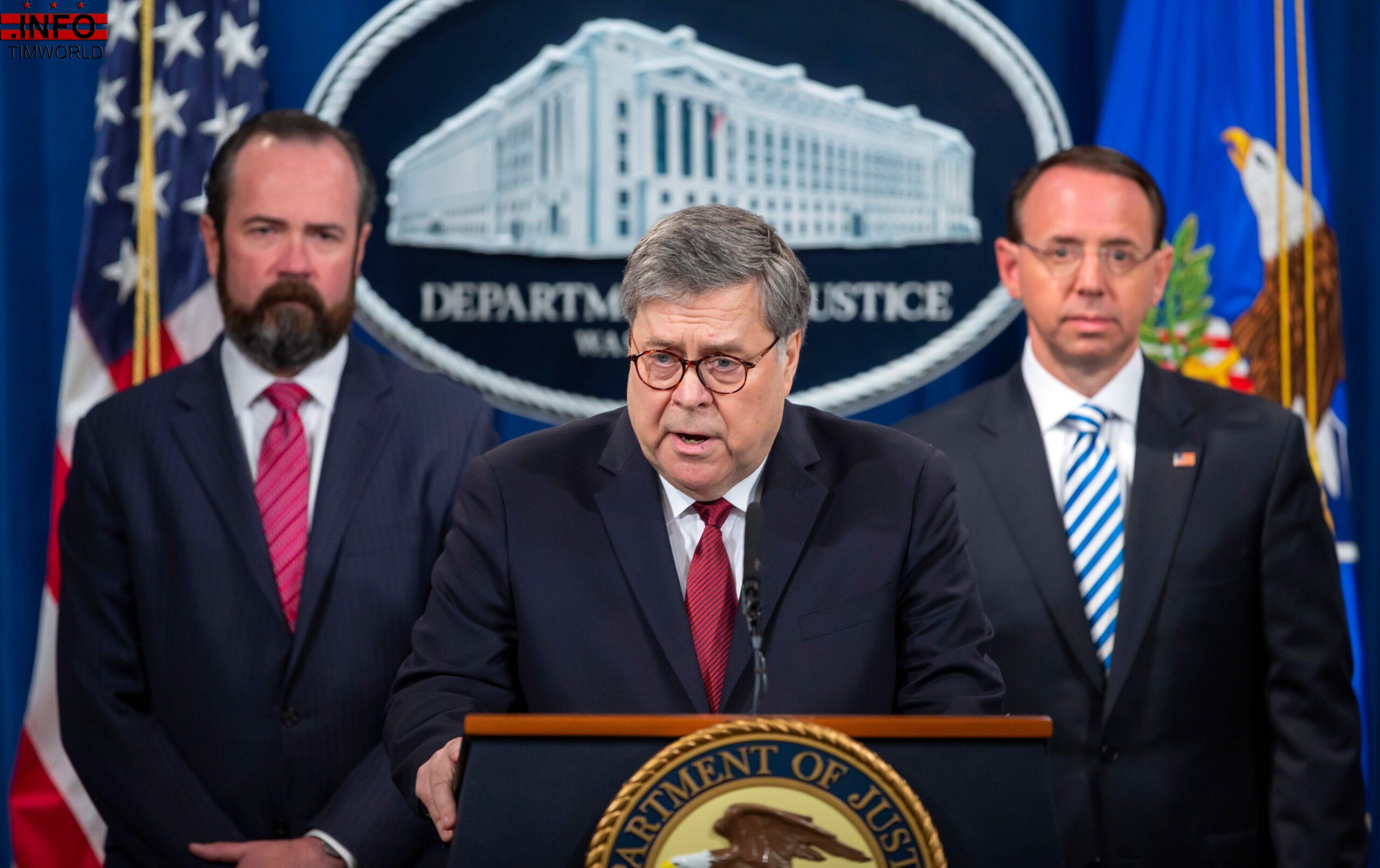 WASHINGTON – A day after being cited for contempt, Attorney General William Barr looked no worse for the rare rebuke.

Barr, in his first public appearance since the House Judiciary Committee took action against the attorney general for refusing to turn over an unredacted version of special counsel Robert Mueller’s Russia report, wore a broad smile as he presided over a farewell ceremony for Deputy Attorney General Rod Rosenstein.

Drawing howls of laughter, the attorney general did not hesitate to address the congressional admonishment, suggesting that it  “must be a record” for the first 100 days of any attorney general’s tenure.

He then called the guest of honor, Rosenstein, to his side to re-enact a much-mocked scene from a Justice Department briefing just prior to last month’s release of Mueller’s report when Rosenstein stood stone-faced behind his boss, prompting a comic viral surge on Twitter.

“I do my best work at congressional hearings,” Barr said, referring to his own combative appearance last week before the Senate Judiciary Committee. “Rod does his best work standing behind the attorney general.”

More: Barr vs. Mueller: The attorney general fights his own battle with the special counsel as he stands up for Trump

While Thursday’s ceremony was staged to honor Rosenstein’s three-decades at the department, it was transformed into a pep rally of sorts where former and current officials offered stirring defenses of an agency thrust into a harsh spotlight since Mueller’s report was made public.

Former Attorney General Jeff Sessions, whom President Donald Trump ousted largely because of his recusal from the Russia investigation, cited Rosenstein’s unswerving leadership during “one of the most difficult times in the history of the department.”

Referring to Mueller by name, Sessions said the special counsel was “given the time and the support” to complete his work.

“At the end, in America, we are committed to a lawful process,” Sessions said. “The system worked. What more can a public servant do?”

Sessions, who left the podium to a standing ovation, was only one in a roster of guests drawn to the department’s cavernous Great Hall and who played singular roles in the 22-month inquiry that–despite its completion–continues to shake at the highest levels of the department.

Though Barr and Rosenstein, whose tumultuous tenure was defined by Mueller’s investigation, were the unquestioned headliners of the event, others included former White House Counsel Don McGahn, perhaps the most quoted witness in the special counsel’s scathing 448-page report; Senate Intelligence Committee Chairman Richard Burr, R-N.C., whose committee continues its own inquiry of Russian interference; Matt Whitaker, who briefly served as acting attorney general following Sessions’ ouster; and FBI Director Christopher Wray, who replaced James Comey after his abrupt dismissal because of his handling of the Russia inquiry.

Also not to be ignored was the symbolism of the very date of Thursday’s ceremony: two years to the day of Comey’s dismissal, an act that contributed to broadening Mueller’s inquiry into an examination of whether Trump had sought to obstruct the investigation by firing the man who then ran it.

Because Mueller did not make a determination on the question of obstruction, Barr intervened in March, announcing in a summary of the special counsel’s findings that there was insufficient evidence to charge the president with criminal obstruction.

Democrats have since seized on Barr’s intervention, claiming that the attorney general acted to protect the president.

Outside of Mueller’s team, however, the public weight of the past two years of investigation was mostly borne by Rosenstein who spent much that time on the verge of removal or resignation.

His oversight of Mueller’s far-flung inquiry into Russian election interference often made him a favorite target of Trump, who once superimposed Rosenstein’s likeness behind prison bars in one of many tweets disparaging the president’s political enemies.

Among his first actions as deputy attorney general, Rosenstein authored a memorandum that Trump used as the basis for firing Comey.

Nonetheless, Rosenstein often found himself in the middle of a politically-charged battle in which Trump and congressional allies cast the deputy attorney general as a ringleader in partisan “witch hunt” while Democrats came to view the Republican as an unlikely guard against White House interference.

His tenure nearly came to a premature end last year when he mulled resignation in the wake of a New York Times report indicating that he suggested invoking the 25th Amendment to remove Trump.

Rosenstein strongly denied the report, which indicated that he suggested recording Trump’s conversations in hopes of triggering the president’s removal from office.

The incident prompted a hastily-called White House meeting where Rosenstein expected to be fired – only to return to Justice later that day with his status unchanged.

His relationship with Trump, while often fraught, appeared in recent months to settle, with Trump claiming in a January interview with the New York Times that the deputy attorney general had assured him that he was not a target of Mueller’s probe.

In his resignation letter submitted last month, Rosenstein offered both gratitude to Trump and veiled references to the extraordinary challenges posed by the investigation that shadowed the first two years of Trump’s administration.

On Thursday, the outgoing deputy attorney general summoned an unmitigated defense of the department and its handling of Mueller’s report.

“The rule of law is not just a talking point for us,” Rosenstein told the audience, “it is an operating principle. The rule of law requires us to ignore partisan politics, tune out the news cycle, and base our decisions on credible evidence.

“We stayed the course and we accomplished what we set out to do,” he said. “I leave here confident that justice is in good hands; it is in your hands.”