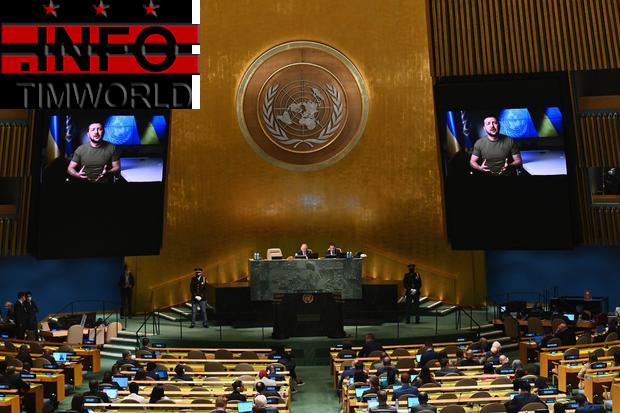 United Nations — Speaking in English to the 193-nation United Nations General Assembly, Ukrainian President Volodymyr Zelenskyy delivered a pre-recorded message to a standing ovation, with the exception of the Russian delegation and a handful of other countries, in the Hall filled with world leaders and his own wife, first lady Olena Zelenska.

Zelenskyy was unable to travel to U.N. Headquarters in New York City because of the escalation in attacks by Russia. Just hours earlier, Russian President Vladimir Putin announced a large mobilization of Russian forces for the attacks against Ukraine, and began preparations for a referendum to formalize its occupation of parts of Ukraine. The referendum is considered a sham by the U.S. and European Union.

Earlier this year, the U.N. decided that a leader must be in the headquarters in order to speak this year. But, the General Assembly voted 101-7 for an exception for Zelenskyy. The members that voted against him speaking were Belarus, Cuba, North Korea, Eritrea, Nicaragua, Russia and Syria.

Ukrainian President Volodymyr Zelenskyy is seen on screen as he remotely addresses the 77th session of the United Nations General Assembly at U.N. Headquarters in New York City on Sept. 21, 2022. ANGELA WEISS/AFP via Getty Images

“It was a vote not only about the format. It was the vote about principles,” Zelenskyy said in his Wednesday speech. “Seven who are afraid of the video address. Seven who respond to principles with a red button. Only seven. One hundred and one – and seven.”

The Ukrainian president went on to detail the atrocities committed against the country’s civilians and asked the U.N. to hold Russia accountable for the alleged crimes. He said a family — a father, mother, a 6-year-old girl, a 8-year-old girl, and their grandparents — was killed in a Russian airstrike, and he pointed to the recently-discovered mass grave in Izyum.

Zelenskyy said the U.N. should recognize Russia as “a state sponsor of terrorism.”

“After the Russian missile terror. After the massacres. After Mariupol,” he said. “After the burning of Ukrainian prisoners in Olenivka by the Russian military. After blocking the ports. After the strikes of Russian tanks and missiles on nuclear power plants. And after threats to use nuclear weapons, which have become the rule, not the exception, for Russian propagandists…”

Zelenskyy outlined a plan with five “preconditions” for peace with Russia: punishment for aggression; protection of life; restoration of security and territorial integrity; security guarantees; and determination to defend oneself. He also called for the U.N. to create a special tribunal “to punish Russia for the crime of aggression against our state.”

“This will become signal to all ‘would-be’ aggressors that they must value peace or be brought to responsibility by the world,” he said.

“We did not provoke this war,” he said. “We held 88 rounds of talks in various formats to prevent this war, just from the beginning of my presidency until February 24 this year.”

But instead of finding a way forward, Russia, he said, began a “full-scale” aggression.

“Russia wants war. It’s true. But Russia will not be able to stop the course of history. Mankind and the international law are stronger than one terrorist state,” he said. “Russia will be forced to end this war. The war it has started.”

Pamela Falk is the CBS News correspondent covering the United Nations, and an international lawyer.