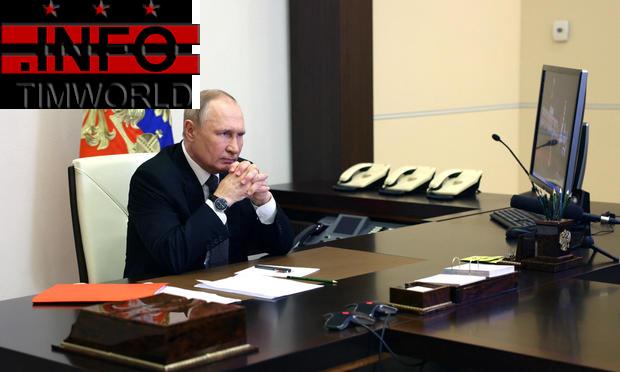 Russian President Vladimir Putin declared martial law on Wednesday in the four Ukrainian regions that Moscow previously claimed it had annexed — Donetsk, Luhansk, Kherson and Zaporizhzhia — areas it was struggling to defend amid continued Ukrainian advances. Russia’s claimed annexation of those regions was condemned as illegal by the international community.

Under Russian law, “martial law” allows for the strengthening of the military, curfews and limits on movement.

During a meeting of Russia’s National Security Council, Putin also ordered the establishment of a special coordinating council to boost Russia’s war effort by working with local areas within Russia.

Russian President Vladimir Putin chairs a meeting with members of the Security Council via a video link at a residence outside Moscow, Russia, October 19, 2022.  SPUTNIK via Reuters

In a decree published by the Kremlin, “economic mobilization” was ordered in eight Russian regions near Ukraine, including Crimea — which Russia annexed in 2014 — and Krasnodar, Belgorod, Bryansk, Voronezh, Kursk and Rostov. It may also allow for restriction on movement for the residents of these regions. Following Putin’s remarks, both the Kremlin and the foreign ministry said there are no plans to fully shut Russian borders.

Putin said the eight regions were being put on a “medium level of response,” and that the leaders of all of Russia’s regions would be given greater powers to maintain public order, protect critical facilities, and increase production.

The moves mean that more ordinary Russians will be directly affected by the war in Ukraine.

Earlier Wednesday, tens of thousands of people were being moved out of Kherson, according to the Russia-installed local leader, who said that the action was to prepare for an upcoming Ukrainian offensive.

Vladimir Saldo said that all the Russia-appointed officials would leave, along with around 60,000 people in an “organized, gradual displacement.”

Ukraine said residents should ignore the move, and the head of the regional administration of Kherson said that Russia was trying to take Ukrainians hostage, the BBC reported.

Haley Ott is a digital reporter/producer for CBS News based in London.