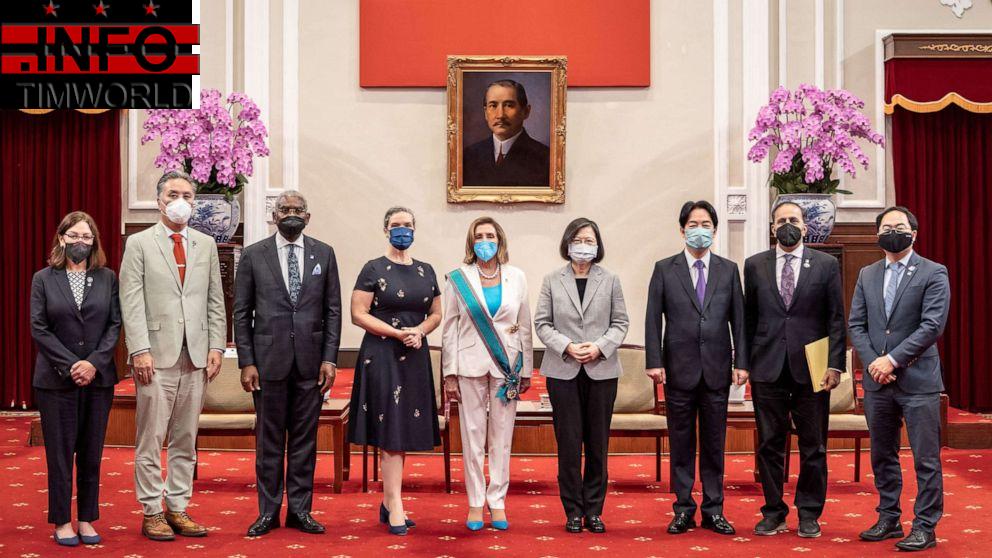 Speaker of the U.S. House of Representatives Nancy Pelosi said Wednesday that she and other members of a congressional delegation “came to Taiwan to make unequivocally clear we will not abandon our commitment” to the self-governing island.

Pelosi and her delegation landed in Taipei on Tuesday night despite repeated warnings not to visit from mainland China, which claims the island as its own territory. She is the first U.S. speaker to visit Taiwan in more than 25 years. Beijing considers any official contact with Taiwan a recognition of its democratically elected government, which the mainland’s ruling Communist Party asserts has no right to conduct foreign relations.

Minutes after Pelosi’s plane touched down at Taipei Songshan Airport in the Taiwanese capital, mainland China announced live-fire military drills around Taiwan, some of which reportedly began that night ahead of four days of exercises starting Thursday.

The military exercises will be the largest aimed at the island since 1995, when China fired missiles apparently in response to then-Taiwanese President Lee Teng-hui visiting the United States.

On Wednesday, Pelosi and her delegation met with Taiwanese President Tsai Ing-wen as well as other senior officials in Taipei. In a brief speech during her meeting with Tsai, the U.S. speaker conveyed the message that, “now more than ever, American solidarity with Taiwan is crucial.”

“Forty-three years ago with the Taiwan Relations Act, America made a bedrock promise to always stand with Taiwan,” Pelosi said. “And on this strong foundation, we have built a thriving partnership grounded in our shared values of self-government and self-determination focused on our mutual security interest in the region and across the world.”

“Today the world faces a choice between democracy and autocracy,” she added. “America’s determination to preserve democracy, here in Taiwan and around the world, remains ironclad.”

Tsai thanked Pelosi and the delegation for visiting the island democracy under “challenging circumstances,” slamming Beijing’s military drills as “unnecessary responses.” She said Taiwan is “committed to maintaining the status quo across the strait” and that her government is open to constructive dialogue with Beijing, which has refused to engage with Tsai’s administration since she came to power in 2016.

“Facing deliberately heightened military threats, Taiwan will not back down,” Tsai said during the meeting. “We will firmly uphold our nation’s sovereignty and continue to hold the line of defense for democracy.”

The Taiwanese president also thanked Pelosi — “truly one of Taiwan’s most devoted friends” — for her decades of support and presented her with a civilian honor, the Order of the Propitious Clouds.

“Thank you for taking concrete actions to show your staunch support for Taiwan at this critical moment and for expressing the U.S.’s consistent policy supporting Taiwan’s self-defense,” she added.

Pelosi and the delegation departed Taiwan on Wednesday evening. The surprise visit, which was not announced until after their plane landed, was part of Pelosi’s tour of Asia. She visited Singapore on Monday and Malaysia on Tuesday. She will be traveling to South Korea and Japan before returning to the U.S.

“This act seriously violates the one-China principle, maliciously infringes on China’s sovereignty, and openly carries out political provocations, arouses strong indignation among the Chinese people and arouses widespread opposition from the international community,” Wang said in the first statement. “This proves once again that some American politicians have become ‘troublemakers’ in Sino-US relations, and the United States has become the ‘largest spoiler’ of peace and regional stability in the Taiwan Strait.”

Under the so-called “One China principle,” Beijing regards Taiwan as their territory, a renegade province to be reunified — by force if necessary — with the mainland. The U.S. has a “One China Policy” that recognizes the people of mainland China and Taiwan as being part of “One China,” views Beijing as China’s sole legal government and does not support an independent Taiwan, but considers the matter “unsettled.” Washington is also militarily supportive of the self-governing island and maintains extensive commercial and unofficial ties.

Taiwan split from mainland China in 1949, following a civil war between the Nationalist Party’s forces and those of the Communist Party. As the communists took control of the mainland, the nationalists retreated to the island of Taiwan where they established their new capital.

MORE: Biden claims no change in policy, but his Taiwan ‘gaffe’ may be no accident

Both sides agree that they are one country but disagree on which is the national leader. Although they have no formal relations, the island’s economy remains reliant on trade with the mainland.

The U.S. switched diplomatic recognition from Taipei to Beijing in 1979. The Taiwan Relations Act, which went into force that same year, requires Washington to provide Taiwan with the means to defend itself.

Internet slams Kayleigh McEnany’s mindless defense of Trump: ‘She’s not a press secretary. She’s a propaganda pusher’
Far-right violence is on the rise. Where is the outrage?
Trump’s Pick for National Intelligence Director Withdraws