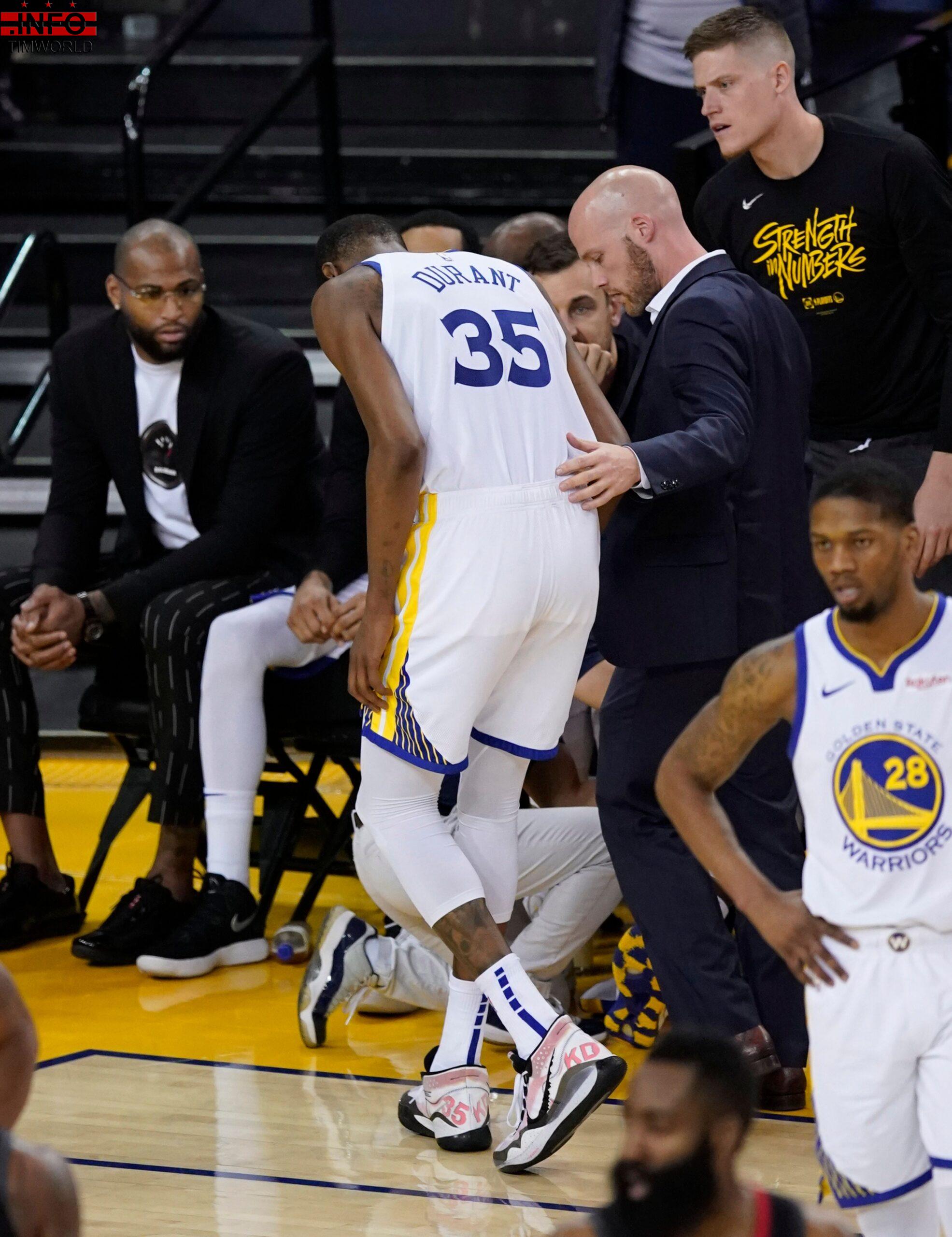 OAKLAND, Calif. — For those of you who think empathy was the only appropriate response after Kevin Durant injured his right leg Wednesday night, this isn’t going to go over very well.

The possibility of the Golden State Warriors losing Durant for Game 6 of the Western Conference semifinals, if not longer, creates delicious intrigue.

Durant’s status is uncertain with the Warriors leading the Houston Rockets 3-2 heading into Game 6 Friday. Golden State won 104-99 on Wednesday.

But this injury allows the rest to ponder these questions:

Could Durant’s absence allow Steph Curry to regain the dominant offensive role Curry gave up when Durant joined the Warriors before the 2016-17 season?

STEVE KERR AFTER INSPIRED WIN: ‘Our guys are (expletive) giants’

SPORTS, DELIVERED: Get latest news right in your inbox!

Could Curry lead the Warriors, not only past the Rockets, but to a third straight NBA title as Durant, set to undergo and MRI Thursday, simply watches?

It would be foolish to argue the Warriors can be better without Durant. But it’d be just as foolish to bet against Curry, especially after what transpired Wednesday when Durant limped off the court and into the team’s locker room.

“During the timeout, we all looked at each other, and there were a couple of smiles in terms of like what that meant for us as a team and the guys that were going to need to step up in those moments,” Curry said. “Next-man-up mentality, Draymond (Green) said that at some point in that timeout.”

Curry stepped up, all right.

After Durant’s injury, which the team described as a calf strain, Curry made his next two shots to close out the third quarter. He then propelled the Warriors to victory with 12 points in the fourth quarter.

It felt a little like 2015, when Curry led the Warriors to the NBA championship — while Durant was still with the Oklahoma City Thunder.

“If Kevin is out, then what you saw in the fourth quarter is what you’re going to have to see going forward,” Warriors coach Steve Kerr said.

What you saw is while Curry initiated the offense, the Warriors played with heightened passion and zest.

There was Green, burying a clutch 3-pointer and on his way a strong night with 11 assists, 10 rebounds and eight points.

There was Klay Thompson, drilling his fifth 3-pointer of the night and breaking a recent shooting slump with a team-high 27 points.

There was Kevon Looney, blocking Chris Paul’s layup with 1:17 left to play. And Jonas Jerebko, draining a long 3-pointer. And the frenetic Warriors, locking down on defense and holding James Harden to only five points in the fourth quarter.

All of that without Durant, who entered the game averaging 34.2 points during the playoffs.

“There’s a big gap that needs to be filled,” Green said. “But one thing I think everyone understood and understands is not one person is going to fill that role. And so we’re going to have to collectively do that.”

With Curry leading the way?

It’ll be damn fun to find out.

Bubba Wallace says NASCAR should ban confederate flags: ‘Get them out of here’
Serena Williams has ‘a little left in me’ after US Open win. Doubles, third round up next
Opinion: New Draymond Green no longer ‘disgusting’ as Warriors chase another NBA title