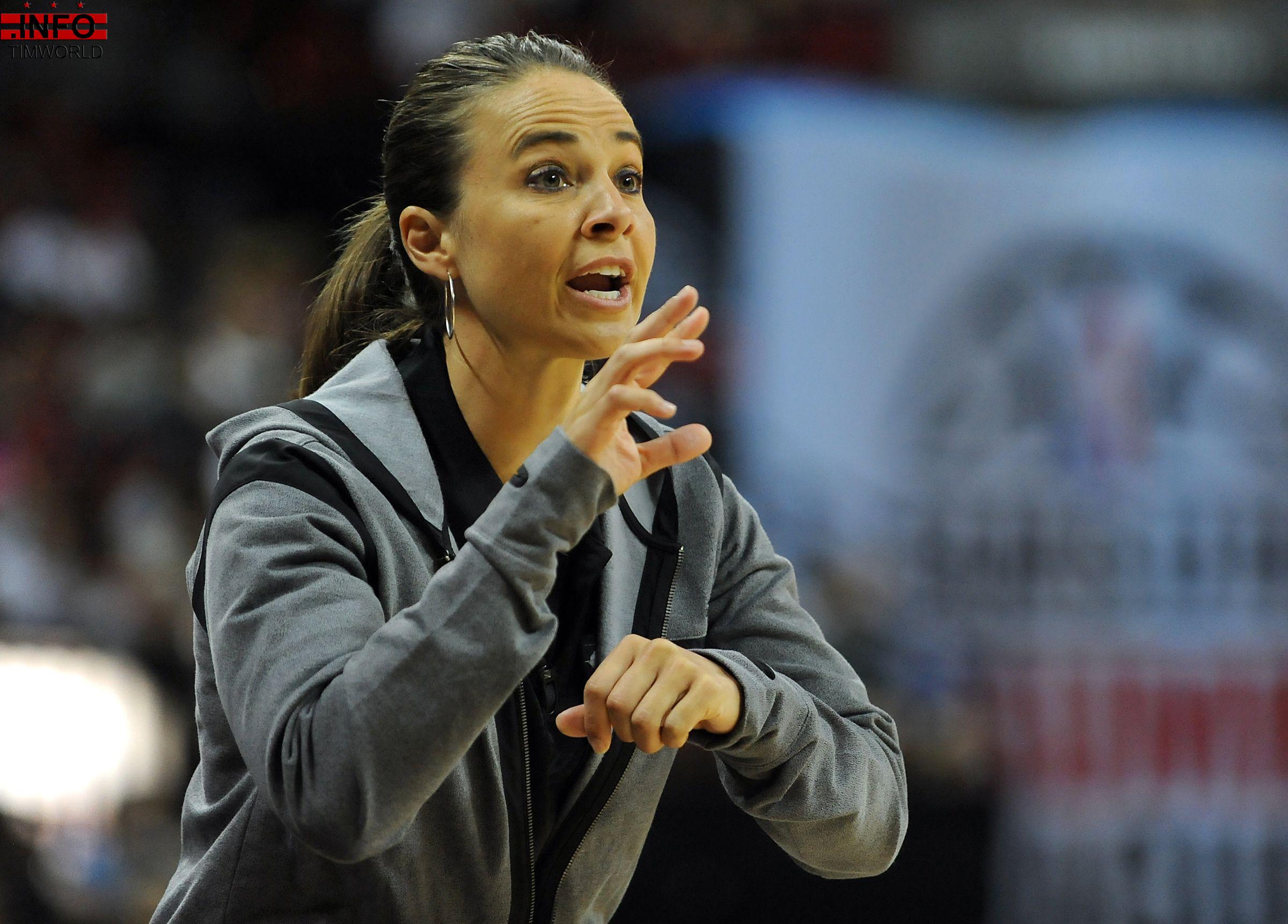 Since the coaching names now being associated with the Los Angeles Lakers look like the retread All-Stars, there’s a natural inclination to wonder whether this should be the time and place for Becky Hammon to become the first woman to get a head coaching job in the NBA.

Given her reputation within the business, her experience as an assistant with the San Antonio Spurs and the small samples we’ve seen of her on the sidelines coaching in summer league, it seems inevitable that Hammon will get a shot sooner or later. The Lakers would be smart to at least talk to her, as Milwaukee did last summer before hiring Mike Budenholzer.

But there’s almost a soft sexism in the idea that Hammon should get any job that comes open. After all, why would her supporters want to put her right now in a situation that seems doomed from the start?

If we’ve learned anything from watching every move the Lakers have made in the last 10 months, it’s that anyone with a bright future in basketball should be extremely wary of tying their career to the current version of LeBron James and a franchise whose plan to fix its roster is…what, exactly?

Sure, there are only 30 of these head coaching jobs in the world. They pay a lot of money, and failure doesn’t seem to limit the ability of those who have done it before from doing it again. Perhaps that’s why the Lakers’ current list, according to reports, includes names like Mike Woodson, Lionel Hollins, Mark Jackson and Frank Vogel after negotiations broke down with Ty Lue.

It’s worth wondering, though, whether Hammon will be extended the same benefit of the doubt as her male counterparts once she gets her first NBA head coaching job. If she’s out after two or three years on the whim of a star player or an egomaniacal owner, will her name go into the same pool of recycled coaches that come up for every opening or will she be labeled a novelty act who couldn’t really do the job after all?

That would be a heck of a career bet to make on the Lakers, of all teams, given the strong possibility that they don’t know what they’re doing on any level as a franchise.

Boston out: Bucks bounce Celtics from playoffs with Game 5 rout

What’s next: Stevens admits he ‘did a bad job’ in Celtics’ disappointing season

For a team that had supposedly spent years in preparation for an earth-shaking event — James coming as a free agent — the Lakers have spent every subsequent moment showing how weak they really are, from owner Jeanie Buss on down to a management team that was clearly dysfunctional with Rob Pelinka and Magic Johnson running basketball operations.

In the end, they’ve played the LeBron thing all wrong. At his age, with all the miles on his body from 1,198 NBA regular season games and nine runs to the NBA Finals, the Lakers needed to be urgent about pairing him with other stars and fashioning a roster that could compete with the Golden State Warriors.

No matter what you think about the futures of Brandon Ingram, Lonzo Ball and Kyle Kuzma, they have become depreciated assets given how little winning the Lakers did this year and how desperate they became to make a mid-season trade for Anthony Davis. And it sure doesn’t seem like any big stars are dying to take that coveted salary cap space that the Lakers created this summer by signing a bunch of misfits to short-term deals.

So what’s the fix? And how can anyone have confidence that this front office has the answer?

It’s a great reminder that ownership, more than any other single factor, is what differentiates the good NBA franchises from the bad. Because the modern NBA owner, by and large, isn’t just the person signing paychecks.

Like it or not as a fan, your owner is likely going to be involved to a larger degree than their expertise would suggest in informing the general manager’s decisions on trades and free agent signings, hiring or firing the coach and figuring out what to do with draft picks. The owner may not be involved on a granular level in setting the table for those big decisions, but they’re going to have a big say in what happens. That’s just how it is.

So when you read a report from ESPN’s Adrian Wojnarowski that the Lakers’ talks with Lue broke down partly because management wanted to hand-pick certain people like Jason Kidd for his staff, it’s a direct result of ownership not empowering the right people to handle things the way functional NBA franchises would handle them.

It’s as if the Lakers are in a competition to one-up UCLA for the worst-run coaching search of the year. The only thing missing at this point is an associate athletics director texting updates to season ticket holders.

But to think Hammon is the solution for that, especially given how quickly James can sour on coaches, does her no favors.

Though it’s possible the attention she’s been given outpaced the reality of her role with the Spurs at times, Gregg Popovich has steadily moved her up the bench and bestowed upon her the same trust that others from his tree have gained before going on to head coaching jobs.

So there’s little doubt she could do it, and, in time, will get her opportunity.

But if you want her to succeed, this one would probably be better to avoid.