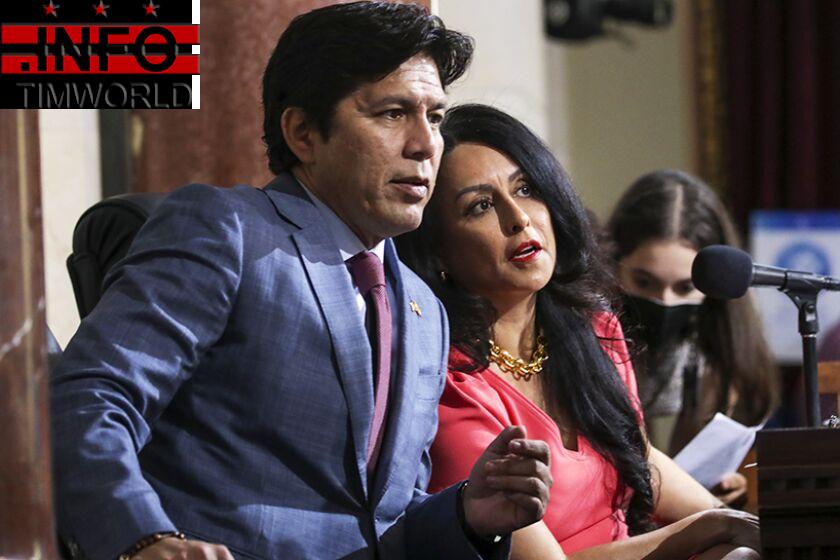 Nury Martinez, the Los Angeles City Council president who derided a progressive district attorney for being “with the Blacks,” described a small Black boy as “parece changuito” (like a monkey) and claimed his white father handled him as if he were an “accessory,” resigned her seat last Wednesday.

But Councilmembers Kevin De León and Gil Cedillo, who were in the room during the leaked conversation in which Martinez spewed racist statements, are still in office.

Major California political figures, including Los Angeles Mayor Eric Garcetti and U.S. Sen. Alex Padilla, have joined protestors in calling for the resignations of Cedillo, whose term ends this year, and De León, who is set to serve through 2024. Even President Biden, who was in Los Angeles last week, has called on the lawmakers to leave office.

The episode, which has captivated much of the country, showcases two political phenomena — strife among Democrats jockeying for power and anti-Black racism among politicians of color — that are rarely aired so openly. Two of the lawmakers involved in the tape have refused to leave office in the face of righteous anger, creating a waiting game of sorts. But focusing on whether a few politicians will resign, rather than on a culture that nurtures anti-Black racism within Latino communities, can obscure the prevalence of racist beliefs, experts told The Times.

Anti-Black racism in the Latino community is not a question of a few bad eggs, said Tanya Katerí Hernández, a law professor at Fordham University School of Law and author of “Racial Innocence: Unmasking Latino Anti-Black Bias and the Struggle for Equality.”

“[Martinez’s] comments don’t exist in a vacuum,” Hernández said. “They exist within a set of cultural racial attitudes that are part of Latino culture.”

In much of the world, anti-Black racism evokes certain images — “whites only” signs hanging above water fountains in the deep South, burning crosses in the Midwest and white men hurling racist insults at Trump rallies. But the Atlantic slave trade made anti-Black racism a persistent global phenomenon.

Although the legacy of slavery is most closely associated with the United States, the trade was much more prevalent in Latin America and the Caribbean. Of 12 million Africans trafficked to the Western Hemisphere, fewer than 400,000 were taken to North America while millions went to Latin America and the Caribbean, according to scholars’ estimates. And although Jim Crow was unique to the United States, Latin American countries continue to use police power and state resources to uphold racial hierarchies and racist social norms through what Hernández calls “customary race regulation.”

“You don’t need ‘whites only’ signs when an entire society already has internalized the notion of what are the white spaces,” Hernández said.

In Latin America, it is common for people to dismiss racism and deem class the primary wedge issue between groups, Hernández added.

But racial disparities permeate Latin American societies. In Colombia, for example, Afro-Latinos account for 26% of the country’s population and 75% of poor people, according to the United Nations. On average, Colombian Afro-Latinos earn 34% less than their non-Black counterparts. In Brazil, Afro-Latinos make up nearly half the population, yet their economic participation is only 20% of the nation’s gross domestic product.

Anti-Black sentiment is prevalent not only among people in Latin America but also among Latinos in the United States, Hernández said. In the U.S., levels of racial prejudice against Black people are comparable for Latinos and non-Hispanic whites, political scientists Yanna Krupnikov and Spencer Piston found in a 2016 study.

In the United States, where Latinos also endure discrimination, it can be easy for people like Martinez to downplay the harm of their words, she added.

“Getting rid of one Nury doesn’t deal with Latino anti-Blackness,” Hernández said, adding that not all Latinos are anti-Black. “But there are many Nurys and we need to become racially literate about the existence of anti-Blackness within communities that are not white Anglo English-speaking Americans. ”

Hasan Kwame Jeffries, a historian at Ohio State University, noted that Martinez made her racist comments during a conversation about political redistricting.

“This isn’t just one’s person’s beliefs or biases against another,” he said. “Nury is connecting to a particular base in a rigidly segregated community. In the context of political power, the solidarity between Black and brown communities can sometimes break down. It would be nice if we could push beyond that. But power is power.”

Black and Latino Democrats often find themselves together pushing for power in Congress, which remains disproportionately white.

In the Los Angeles political power structure, however, there is no shortage of Democrats of color, and lawmakers often find that their most threatening rivals are within their own party.

Martinez expressed “aspirations of replacing one oppressor with another,” Melina Abdullah, who has been affiliated with Black Lives Matter nationally and is currently a leader in BLM-LA, told The Times. The anti-Black sentiments expressed by Martinez are a “common approach of so-called leaders who move based on their own political ambitions rather than service,” Abdullah added.

In Los Angeles, Black organizers say they still see many Latino activists as natural allies in the struggle against white supremacy. But the tape has deepened their distrust of the city’s Latino leadership.

“How can you have any trust in people to make public policy around the interests of Black folks when they’re making fun of Black people like that,” said Greg Akili, a 74-year-old organizer with Black Lives Matter-Los Angeles. “It shows a certain side that many of us thought did not exist within the Los Angeles Latino leadership.”

“People like that should not be in political office,” he added.

Jessica Zubia Calsada, a 23-year-old San Fernando Valley resident, expressed dismay over Martinez’s comments and said they were not an anomaly.

Calsada, a non-Black Mexican American, urged people to call out racism in Latino spaces when it arises.

“It’s important we also look within and put the same energy towards our anti-Black community members as we are towards Martinez,” she said. “We need to stop anti-Blackness to build unity between communities.”

Calsada said she has younger Black siblings and strives to speak up when she hears her family members espouse racist rhetoric.

“I don’t want them to think that this is something that should be normal and something they have to tolerate,” she said.

Japan and Australia PMs to focus on closer military ties
Much of ‘Trump country’ was in recession during 2016 campaign: data
Group linked to far-right ‘boogaloo’ movement plotted terror attacks against protesters: prosecutors