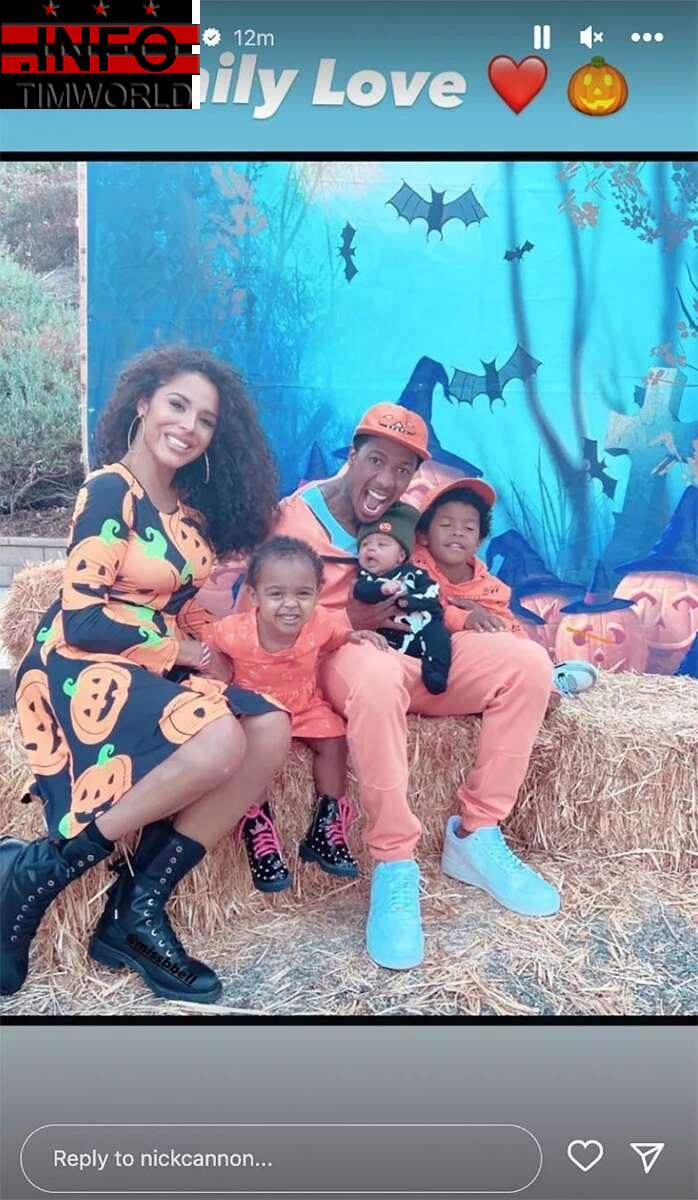 Nick Cannon is getting into Halloween spirit with his kids! Earlier this week, The Masked Singer host enjoyed an afternoon at the pumpkin patch with Bre Tiesi and their son, Legendary.

The Selling Sunset realtor shared photos of the two taking their 3-month-old son to the pumpkin patch for the very first time. In the pics, Tiesi has an arm around Cannon, while he flashes a big smile as he holds Legendary and a pumpkin in his lap.

In other photos, Tiesi poses solo with her son, looking down at the little boy, who is propped up on her shoulder. Cannon also shared a photo of his own from the fall festivities.

In his post, the 42-year-old TV personality holds Legendary up in the air, as he looks lovingly at his son.

“I think I found the pumpkin I want!! @LegendaryLoveCannon,” Cannon wrote.

That wasn’t Cannon’s only stop at the pumpkin patch. In photos shared to his Instagram Story, the father of 10 shared another family photo of him and Brittany Bell’s three children partaking in their own fall fun.

“Family Love,” Cannon wrote over the pic, which shows him flashing a smile as he hold onto all three of his and Bell’s children. Their youngest, Rise Messiah, who was born just last month, sits sweetly in Cannon’s arms, while Golden, 5 and Powerful Queen, 22 months, sit on either side of their dad.

It’s not clear if the photos were taken on the same day, but Cannon appears to be wearing the same orange jumpsuit in both his pumpkin patch pics with Bell and Tiesi.

The Wild ‘n Out star also got in some time with Abby De La Rosa and their two boys. In a video shared to Cannon’s Instagram, he holds their 1-year-old twins, Zion and Zillion, in his arms as they walk out onto the beach, just in time to catch the sunset. The video also sees Cannon flying the birthday kite that De La Rosa and their two kids gifted him in honor of his 42nd birthday earlier this month.

“Such a beautiful way to end the day!! Flying my birthday kite with the family! 🙏🏾❤️,” Cannon captioned the clip.

De La Rosa shared some shots of her own from the sweet moment, revealing that the beach outing was also the first time their twins had touched sand.

In June, Cannon revealed that he and De La Rosa are expecting another child sometime this year, making that baby No. 11 for the TV star. In addition to his children with Tiesi, Bell and De La Rosa, Cannon is also dad to 11-year-old twins Monroe and Moroccan with ex-wife Mariah Carey. In June 2021, Cannon and Alyssa Scott welcomed a baby boy, Zen, who sadly died in December at just five months old following a battle with brain cancer.

Cannon opened up to ET back in August, where he shared how he juggles his busy career and his growing family.

“It’s not as difficult as people think it would be, but I understand [their concern] because it is a very unorthodox scenario,” Cannon explained. “I dedicate probably my entire day to my children. Luckily, we are in a world where I’m blessed with the opportunity. I get to spend more time with my children every single day because of my world and my business model.”

Check out the full breakdown of Cannon’s family tree, below.