National Democrats are ignoring Ohio’s Senate race. Are they blowing an opportunity? 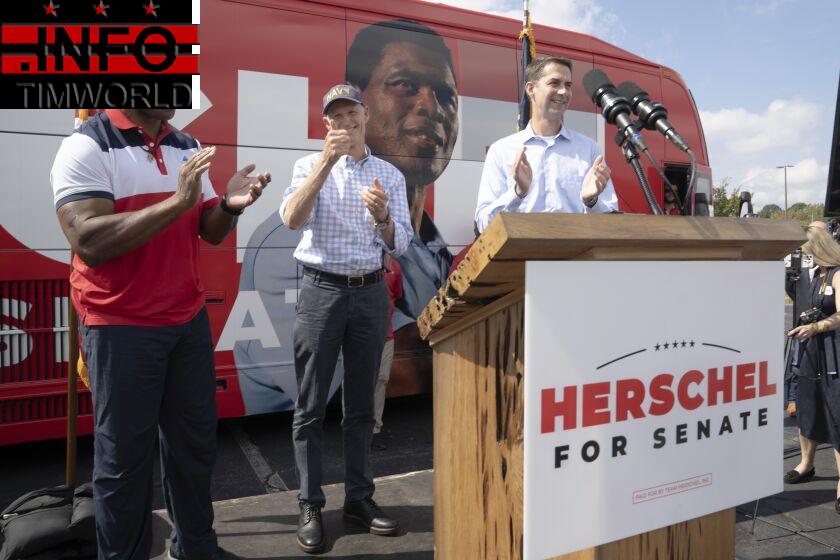 Three weeks before election day, the race for control of the U.S. Senate sits on a razor’s edge.

The stakes are enormous. With Republicans expected to win a majority in the House of Representatives, a GOP-led Senate could help the House dismantle President Biden’s agenda. A Democratic-led Senate, on the other hand, could defend Biden’s programs and confirm his nominees, including to the Supreme Court if a vacancy opens.

So the course of national politics over the next two years or more depends on the outcome of half a dozen Senate races that are too close to call.

Some have captured national attention, thanks to colorful candidates and dramatic twists: Georgia, where Republican candidate Herschel Walker is battling reports that he paid for a girlfriend’s abortion, and Pennsylvania, where Democratic Lt. Gov. John Fetterman, who suffered a near-fatal stroke in May, is competing against television doctor Mehmet Oz.

But for a contest that will gauge the evolution of American politics in the Biden era, it’s hard to beat the slightly less lurid one in Ohio, a state once so closely divided that it determined the outcomes of presidential elections.

Ohio is the quintessential “Obama-Trump” state. President Obama won there in 2008 and 2012, but President Trump won in 2016 and 2020, by a stunning 8% margin each time. The key difference was the defection of white, working-class voters, once part of Democrats’ electoral base, to Trump’s conservative populism.

This year, the Democrats’ Senate candidate, Rep. Tim Ryan, is trying to win back many of those disaffected voters. He has not only cast himself as a moderate Democrat with roots in Ohio’s rust belt; he has openly criticized his party’s national leadership and parts of its program.

“I don’t have time to defend a bad Democratic brand,” he said recently. His party suffers from a “disconnect with working-class people,” he explained.

Ryan has opposed Biden’s student debt forgiveness plan, noting that most Americans don’t have college degrees. He has volunteered his advice that Biden should not run for a second term. He supported Trump’s tough policies on trade with China. In 2016, he challenged Rep. Nancy Pelosi (D-San Francisco) for the House speakership. (He lost.) This year, like many Democratic candidates, he has avoided campaigning with Biden.

Ryan’s spirited, Ohio-centered campaign has boosted him to a dead heat against his Republican rival, “Hillbilly Elegy” author J.D. Vance, who also boasts a working-class pedigree — plus a full-throated endorsement from Trump.

At a rally last month in Youngstown, with Vance sitting in the front row, Trump twitted the candidate for his devotion. “J.D. is kissing my ass — he wants my support so bad,” he boasted.

Ryan quickly turned the moment into a slogan, which he featured when the candidates debated: “Ohio needs an ass kicker, not an ass kisser.”

But Ryan and his allies say they face one big problem: National Republican groups are pouring millions of dollars into Ohio to boost Vance with television advertising, but national Democratic groups haven’t done the same on Ryan’s side.

McConnell’s super PAC, the Senate Leadership Fund, has bought or reserved $28 million in television time in Ohio with more on the way. The Democrats’ counterpart, the Senate Majority Fund, hasn’t spent a dollar in Ohio; another Democratic super PAC has spent about $3 million.

Those numbers don’t tell the whole story, however. Ryan has vastly outraised Vance, enabling him to buy slightly more television time so far. But Ohio Democrats are braced for a tsunami of negative super PAC ads against Ryan in the race’s final weeks and frustrated that their party isn’t coming to the rescue.

“We don’t have the national support that we want,” Ryan complained last week.

National Democratic officials say the party’s funding decisions have been a matter of hard-nosed calculation — nothing personal.

The party’s first responsibility is to protect endangered incumbents like Sens. Raphael Warnock in Georgia and Catherine Cortez Masto in Nevada, they argue.

And given Ohio’s recent history — polls incorrectly projected close outcomes there in both 2016 and 2020 — they don’t trust the surveys that show Ryan and Vance neck and neck.

Ryan and his frustrated allies have raised another possible motive — a complaint that conveniently dovetails with his message that he’s an independent voice not beholden to the national party.

“We think that’s part of it,” a top Ohio Democrat told me. “We hear things like, ‘Your candidate’s running as a Republican.’ That’s not fair. He’s not being a cheerleader.”

Some of this is merely the pitiless calculus of campaign finance: Money is finite, and not every candidate makes the cut.

But Democrats appear to be passing up a chance to test an important proposition — that centrists who veer from their party’s progressive positions can win back some of the blue-collar voters who were once the core of Democratic support.

Trump, Biden Debate in Final Face-to-Face Encounter Thursday Night
Bloomberg places upward of $25.4 million worth of television ads as he is expected to jump into presidential race
Lessons from one-party rule