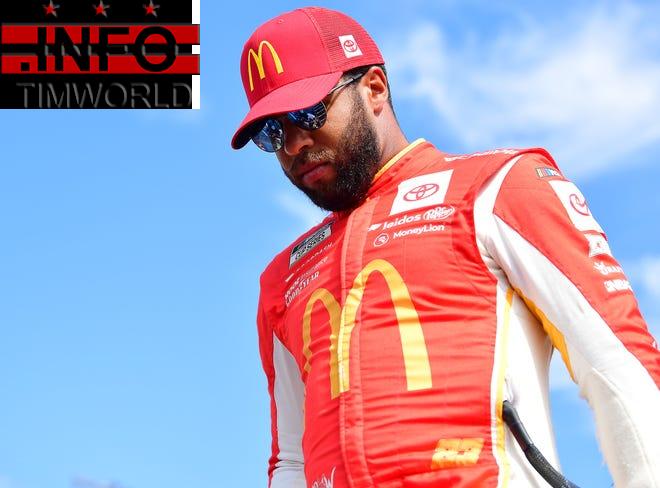 NASCAR suspended Bubba Wallace on Tuesday for the upcoming race at Homestead-Miami Speedway after he spun reigning champion Kyle Larson at Las Vegas Motor Speedway on Sunday and then confronted him afterward.

NASCAR classified Wallace’s infraction as behavioral, which per the rule book could cover Wallace deliberately spinning Larson, his contact with a series official and his shoving match with Larson.

Wallace, who is the first Cup Series driver to be suspended for an on-track incident since 2015, will miss Sunday’s race in South Florida.

Larson, who had already been eliminated from the championship chase, attempted a three-wide pass on Lap 94 and Kevin Harvick in the middle dropped out of the bunch. Larson slid up the track toward Wallace, who did not lift to give Larson any room. Larson then shoved Wallace’s Toyota into the wall.

Wallace had led 29 laps in a car he believed capable of winning and reacted by following Larson’s car down to the apron, where he seemed to deliberately hook him in the rear corner as retaliation. That sent Larson spinning into the path of Christopher Bell, a title contender who is part of the Toyota camp with Wallace.

It ended Bell’s race and dropped him to last in the eight-driver playoff standings.

Wallace, meanwhile, climbed from his car and marched his way on the track toward Larson. Wallace was shouting before he even got to Larson and immediately began to shove the smaller driver.

Larson tried to turn away from him and several times lifted his arms to block Wallace’s shoves, but Wallace got in multiple shots before a NASCAR safety worker separated the two.

WALLACE:Charges Kyle Larson after both crash out of Las Vegas race

OPINION:Wallace ignored his own mantra in Larson conflict

Wallace on Monday night apologized “for my actions” in a social media post he titled “Reflection.” His apologized specifically to NASCAR and its fans, but also Bell, Joe Gibbs Racing and Toyota for “putting them in a situation in the Playoffs that they do not deserve.”

His post did not address wrecking Larson – Wallace had claimed his steering broke when he hit the wall – or apologize specifically to Larson.

“I compete with immense passion, and with passion at times comes frustration,” Wallace wrote. “Upon reflecting, I should have represented our partners and core team values better than I did by letting my frustrations follow me outside of the car. You live and learn, and I intend to learn from this.”

Joey Logano, winner of Sunday’s race and the first driver locked into the championship-deciding finale, said Wallace’s “retaliation is not OK, in the way it happened.”

“If he spun (Larson) into the infield, maybe it’s a little better,” Logano said on SiriusXM NASCAR Radio. “But right-rear hooking someone in the dogleg is not OK. I don’t think anyone realizes how bad that could have been. That could have been the end of Kyle Larson’s career. That to me was what was on the line. Or, his life.”

Logano said Larson was fortunate to ricochet into Bell, “in a way, he was lucky to hit (Bell) to soften it a little bit.

“(Larson) might have flush-hit that thing in the side. And then game over. There’s no room for that. You can’t do that,” Logano said. “I don’t like using cars for a weapon. If you’re that mad, just get out and fight him.”