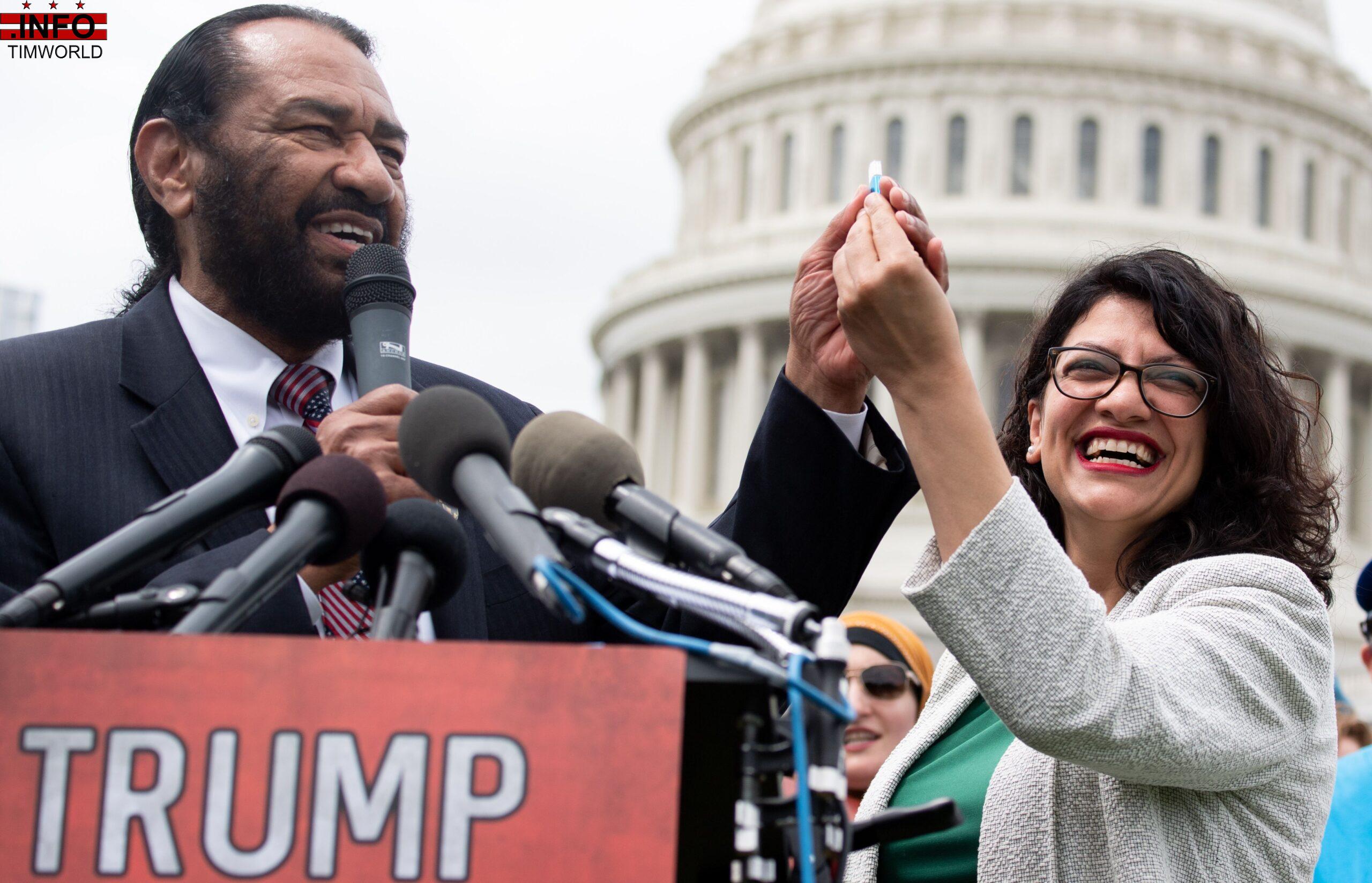 WASHINGTON – Hours after House Speaker Nancy Pelosi accused Donald Trump of sending the country into a “constitutional crisis,” she faced calls from progressive Democrats to take immediate steps toward impeachment of the president.

“I believe impeachment is the solution to a constitutional crisis,” said Rep. Al Green, D-Texas, who joined Rep. Rashida Tlaib, D-Mich., and progressive activists at a pro-impeachment event outside the U.S. Capitol Thursday.

“There is no hard and fast definition for constitutional  crisis … but when you have the president of the United States deny Congress the opportunity to perform its lawful oversight duties and that involves him, then you’ve got a crisis,” Green said.

Activists, including some from MoveOn, said they had more than 10 million signatures for an online petition to impeach Trump. At a press conference steps from the Capitol, they held up signs that read, “Trump Must Go,” and chanted, “I’m fired up, can’t take it no more!”

Pelosi has long said impeachment is divisive and would not be successful unless Republicans get on board. In an exclusive interview with USA TODAY in March she said it would be “a gift to the president.”

Following the release of special counsel Robert Mueller’s report on Russian interference in the 2016 election, the Trump administration has been blocking requests from Congress for fact finding and testimony, causing escalating tensions between the two branches of government.

Pelosi has not ruled out impeachment but said Democrats should focus first on investigating Mueller’s findings. If the facts lead to impeachment “that’s the place we have to go,” the speaker has said.

“It is so important that we completely push back very strongly, very loudly against this president not abiding by the United States Constitution,” Tlaib said. “People at home get it. They understand it. This is not about a political strategy for them. This is about their livelihood. This is about our country and about our own democracy.”

Green and Tlaib have been vocal proponents of the House beginning impeachment proceedings against Trump. They introduced a resolution last month calling for the House Judiciary Committee to look into whether to impeach Trump. The measure has seven Democratic co-sponsors, including progressive freshmen Ayanna Pressley of Massachusetts, Ilhan Omar and Alexandria Ocasio-Cortez of New York.

Democratic leaders, however, have been wary of going that route, worried it could backfire and pump up Trump’s base.

But Green, who was among the first to call for Trump’s impeachment, said, “I will not allow political expediency to trump moral imperative.”

Green said he has already brought two privileged resolutions on impeachment and threatens to do another if the House Judiciary Committee doesn’t act.

“I have given my solemn commitment that this president will face impeachment in the House of Representatives,” he said.

Mueller’s 448-page report detailed multiple contacts between Russian operatives and Trump associates during the 2016 campaign, but investigators did not find evidence of a criminal conspiracy. The report documented a series of actions by Trump to derail the special counsel’s investigation, although it did not reach a conclusion on whether he illegally sought to obstruct justice.

Some Republicans cautioned a Democratic push for impeachment, arguing it will backfire politically.

Rep. Peter King, R-N.Y., who voted against the impeachment of then-Democratic President Bill Clinton in the late 1990s, called the effort “terrible.”

But, he said Thursday, “politically it may help Republicans in that people say this is overkill.”

DC Homeowners: DIY Your Replacement Sink Or Hire A Pro?
Why the Constitution is a beacon of hope
Rep. Adam Schiff Submits Pence Aide’s Classified Letter To Judiciary Committee