Mike Pence: Why his role as Trump’s evangelical ambassador is facing new pushback 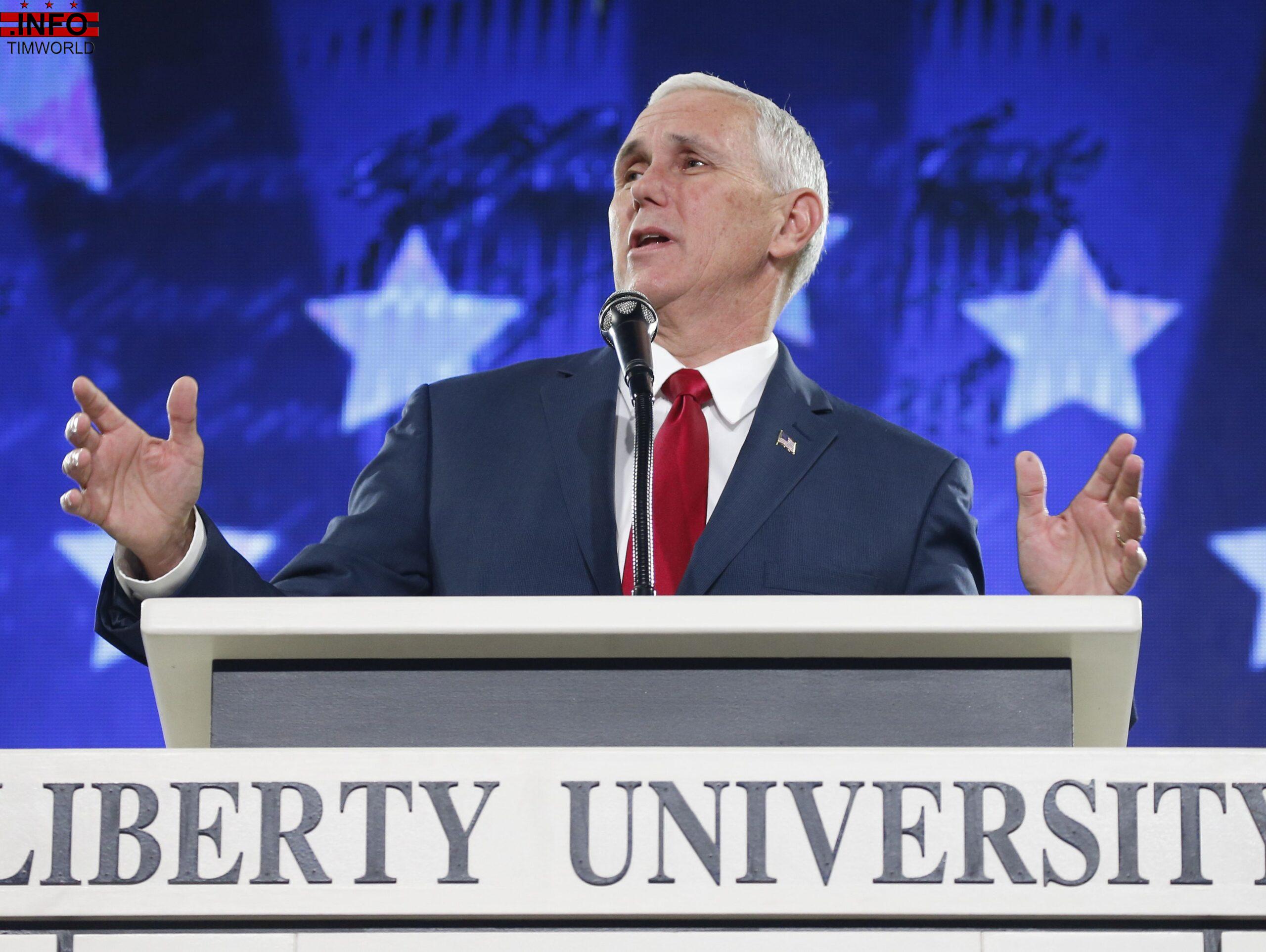 Although not specified, that help has included Mike Pence’s full-throated defense of Trump’s faith credentials as a liaison to Christian conservatives – a bedrock constituency for the Republican president.

But in an overheard private exchange, Pence’s longtime friend Ralph Reed, chairman of the Faith and Freedom Coalition, offered the vice president words of reassurance that hinted at the tougher political climate he has faced lately .

“I hope you’ve seen me out there defending you,” Reed told Pence at a White House dinner the night before. “It hasn’t been a hard job.”

Pence, who will deliver the commencement address at Liberty University Saturday, remains an important asset as the 2020 campaign gears up.

But he’s facing new challenges in that role as divisions in the faith community widen over issues like homosexuality and immigration, and as Pence’s religious-based views have increasingly become a target for Democrats and late-night comedians.

Polls show there may be some softening of support for Trump among white evangelical Protestants.

And the commencement address Pence will deliver May 18 at a Christian university in his home state has divided the campus.

Plus, after spending more than two years vouching for Trump’s religiosity, Pence himself, has been under attack.

Pence’s faith-based views on abortion and homosexuality have made him a punching bag – and fundraising asset – for two groups providing much of the energy of the Democratic base: women and LGBTQ activists.

“Is it that he stopped believing in scripture when he started believing in Donald Trump?” Buttigieg asked at a CNN town hall in March that started the unexpected rise in his candidacy.

So @PeteButtigieg claims @VP Mike Pence stopped “believing in scripture when he started believing Donald Trump.” That not only a smear and an attack on Pence’s faith, it is an attack on the faith & convictions of millions of Christians. The media applauds it.

Despite the unlikely partnership between Christian conservatives and Trump, 81% of white evangelicals voted for him. That’s a greater share than supported George W. Bush in 2004, John McCain in 2008 or Mitt Romney in 2012.

Many were won over by Trump’s promise to appoint conservative judges and because of their antipathy to his opponent, Hillary Clinton. But Trump’s choice of a running mate also made the alliance more palatable.

“You did see a big shift in public opinion toward Trump among evangelicals after the Pence pick,” said David Barker, professor of government and director of the Center for Congressional and Presidential Studies at American University.

Liz Mair, a Republican communications consultant who has been critical of the president, said a top benefit of adding Pence was to give establishmentarian Republicans who are socially conservative an excuse to be for Trump.

In addition to being a leading advocate for anti-abortion policies, Pence has also played a significant role in the administration’s strong support for Israel – an issue important to evangelicals – and has been a top voice on “religious liberty” concerns.

At last week’s Rose Garden announcement of new faith-based protections for healthcare workers, Trump said the ability to opt out of providing services that violate religious beliefs is something people of faith have sought for a long time.

When Jerry Falwell Jr., the president of Liberty University, announced in March that Pence would deliver the May 11 commencement address, he called Pence a hero to Christians everywhere.

But Pence’s May 18 address at Taylor University, a Christian school in Indiana, has received considerable pushback.

The day of the announcement, the faculty voted 61-49 in a nonbinding expression of disagreement with the decision. An online petition started by a Taylor alum complains that the address will make the school “complicit in the Trump-Pence Administration’s policies, which we believe are not consistent with the Christian ethic of love we hold dear.”

“Pence represents one part of Christianity, which has been in the spotlight in America a lot in the last couple years,” Emily Russell, a 2018 Taylor graduate, told IndyStar. “But that is not the only side of Christianity.”

Chandler Thornton, head of the College Republican National Committee, said he’s a little surprised that there would be opposition to Pence at a Christian school.

But, “in general, I wouldn’t be surprised,” he added. “There’s been a widespread movement to shut down conservative voices on college campuses.”

Public approval of Pence was weakest among younger people and increased with age in a CNN poll conducted at the end of January.

Isaiah Mears, chairman of the Indiana Federation of College Republicans, said he hasn’t seen any flagging in support for the Trump/Pence ticket in Indiana. But nationwide, he said, people his age are “really turned off by the political environment.”

“I’m seeing…less and less conservative young people wanting to get involved or have a voice in politics,” he said, blaming the media for “a lot of political polarity in the news.”

That generational divide exists among Christian conservatives on some key issues.

There’s an even bigger split on immigration, Trump’s signature issue. Two-thirds of younger white evangelicals agree with the statement that “immigrants strengthen the country because of their hard work.” But less than half of any other age cohort of white evangelicals share that view.

While turnout among younger voters is lower than among older ones, losing a significant number of younger evangelicals could be problematic for the president, Cox said, “given that that’s a critical base the administration is relying on for re-election.”

Vice President Mike Pence, center, holds the hand of his wife, Karen, as they are joined by Texas Gov. Greg Abbott and other leader in a prayer during a stop at the First Baptist Church, Thursday, Aug. 31, 2017, in Rockport, Texas, as they tour areas effected by Hurricane Harvey. (Photo: Eric Gay/AP)

White evangelical Protestants still overwhelmingly support Trump, giving him the strongest backing of any religious group, according to the Pew Research Center. But the 78% approval rating Trump received from that group at the start of his administration had dropped to 69% in January.

Likewise, a Morning Consult poll released last week pegged support for Trump at 70% among white evangelicals. But only 55% said they would prefer Trump at the top of the ticket, compared to 71% of Republicans who said the same.

Barker, the American University professor, doubts there has been any softening of support among evangelicals in part because of how many policy wins the administration has delivered.

But Barker said evangelicals are becoming a smaller part of the GOP as the party has become more nativist under Trump. Support for Trump is weaker among evangelicals who are more actively involved in their church, he said, and they are also more moderate than other Republicans on immigration issues.

For many independent voters, on the other hand, Trump is a lot more palatable than Pence, said Mair.

“That’s the crowd that I think Buttigieg plays to a lot,” she said. “Mike Pence makes a much better foil.”

Vice President Mike Pence, left, together with invited guests listen to President Donald Trump speak during a National Day of Prayer dinner gathering of faith leaders from the interfaith community in the State Dining Room of the White House in Washington, Wednesday, May 1, 2019. (Photo: Manuel Balce Ceneta, AP)

Reed told USA TODAY that Pence is being attacked because he’s been so effective – as an adviser to Trump and ambassador to Capitol Hill, donors, the GOP establishment and the faith community.

Of the fissure Pence’s upcoming appearance exposed at Taylor University, Reed said: “sophomoric protest is a luxury of youth.”

And he dismissed any suggestion that evangelical support for Trump has weakened. The positions that leading Democratic candidates have taken on abortion and religious freedom issues, he said, mean they are “highly unlikely to make many inroads in the faith community.”

Trump, at the National Day of Prayer event, recited a verse from Isaiah promising that those who hope in the Lord will soar on wings like eagles.

“And that’s something that Mike and I think about all the time,” Trump said. “Right, Mike?”

Beltway Sniper: US Supreme Court To Weigh Virginia Life Sentences
Fazl threatens to throw away containers like matchboxes
Private sector has a big role in the cybersecurity wars