‘Join us in California.’ Gavin Newsom running a reelection ad — in Florida 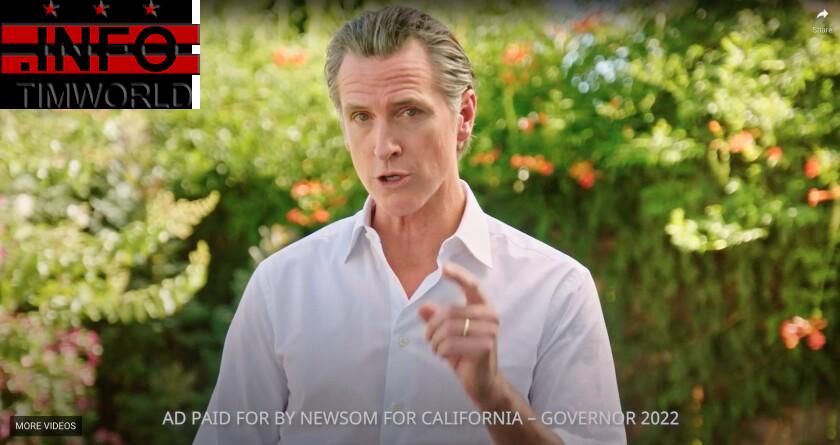 Gov. Gavin Newsom is launching his first television ad of the general election on Monday, but not in California. The ad will air thousands of miles away, in Florida, further fueling speculation that he wants to run for president — or, at a minimum, to troll the state’s Republican leaders.

In the ad, Newsom contrasts the policies in California and Florida while images flash of former President Trump and Gov. Ron DeSantis, potential 2024 presidential candidates.

“Freedom, it’s under attack in your state. Republican leaders, they’re banning books, making it harder to vote, restricting speech in classrooms, even criminalizing women and doctors,” Newsom says in the 30-second spot. “I urge all of you living in Florida to join the fight, or join us in California, where we still believe in freedom — freedom of speech, freedom to choose, freedom from hate and the freedom to love.”

Newsom’s gubernatorial campaign is spending about $105,000 to air the ad on Fox News stations around the state, according to AdImpact, a firm that tracks political advertisements. The ad is running on Independence Day, when most voters are unlikely to be glued to their television sets.

The size of the ad buy is a pittance for the governor, whose reelection campaign had more than $23 million as of May 21, according to the latest filings with the secretary of state’s office. Newsom is heavily favored in the fall election over his conservative Republican challenger, state Sen. Brian Dahle, from Northern California.

The move, which was rolled out on CNN on Sunday, appears designed to draw national media attention. After Newsom tweeted the ad and the media began running stories, it had been viewed 1.4 million times on Twitter and 90,000 times on YouTube as of Sunday evening.

Newsom, 54, has repeatedly denied that he wants to run for president, but many political experts are skeptical, particularly considering the speculation, warranted or not, about President Biden’s plans to seek reelection.

During Trump’s presidency, Newsom served as a national foil, touting California policy on issues such as climate change. And in recent weeks, he has irked some of his fellow Democrats, including House Speaker Nancy Pelosi of San Francisco, by arguing that the party was being too passive on issues such as abortion. “Stop playing defense, Democrats,” he said in June.

Garry South, a Democratic strategist who worked for Gov. Gray Davis and on Newsom’s first, short-lived run for governor in 2009, noted that Republican elected officials have long tried to poach corporations from California.

“When Gray Davis was governor, we had Republican governors from other states in here every second Thursday, so I guess turnabout is fair play,” he said. “I don’t want to be too flippant about it. Now that we have red-state America and blue-state America and it’s getting more divided, there is a place for massively blue states like California where things are still sane; it makes sense to make forays into other states … and see what happens.”