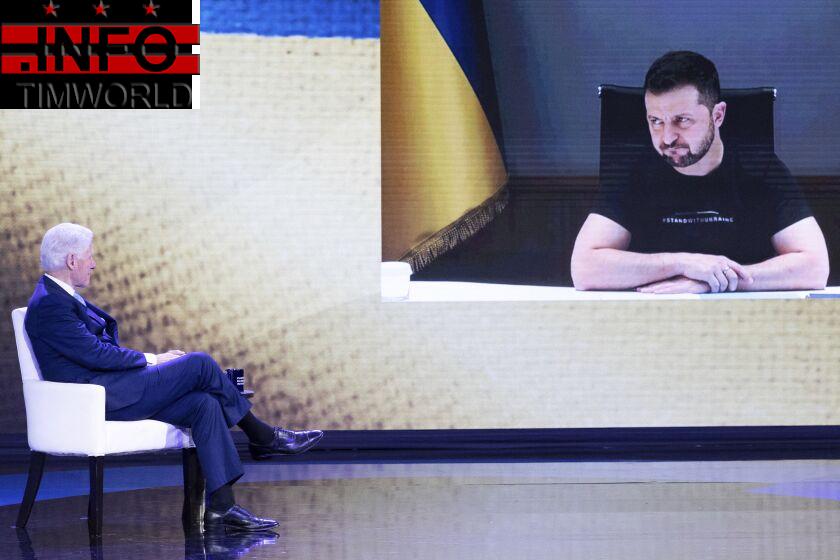 “Let us speak plainly: A permanent member of the United Nations Security Council invaded, attempted to erase the sovereign state from the map,” Biden said, calling Russia’s invasion of Ukraine “a brutal, needless war” that was “chosen by one man.”

1:29 p.m. Sept. 21, 2022An earlier version of this article said that Biden announced a new aid package for Ukraine during his speech. He did not.

The West will not shrink from its commitment to support Ukraine, Biden vowed.

Russia’s and China’s standing as two of the five Security Council members is undermining the U.N.’s ability to fulfill its mission, Biden went on to argue. Intent on signaling to allies and adversaries alike that the United States will not waver in its defense of Ukraine and support for other sovereign nations, the president urged the United Nations to add additional members to the Security Council to weaken Russia and China’s influence. But he did not go as far as to call for revoking their Security Council membership and, with it, their veto power.

“The time has come for this institution to become more inclusive,” Biden said.

The annual week of meetings at U.N. headquarters, the first full in-person gathering in three years, comes as Putin, his military having suffered major setbacks in recent weeks, has indicated he now plans to annex occupied regions of Ukraine. Moscow-aligned puppet governments there are preparing to hold sham referendums on joining Russia.

Just hours before Biden’s speech, Putin announced an immediate partial mobilization of 300,000 reservists in a prerecorded address airing on Russian state television. Characterizing the conflict as a war with the West, he went as far as to threaten to deploy nuclear weapons.

“To defend Russia and our people, we doubtlessly will use all weapons resources at our disposal,” Putin said. “This is not a bluff.”

Putin’s remarks won’t come as a surprise to the White House, where national security officials continue to believe the war is nowhere near a resolution despite Ukraine’s success in pushing back Russian forces from formerly occupied territories in the country’s east.

Biden, who huddled with aides at his hotel Wednesday morning to tweak his prepared remarks in response to Putin’s latest comments, referred to the Russian president’s “irresponsible threats” about nuclear weapons and said Putin had “shunned” the nonproliferation agreement he’d only recently agreed to, calling it a “disturbing trend.”

Since Russia’s invasion of Ukraine in February, Biden’s guiding principle has been keeping the United States and the North Atlantic Treaty Organization unified — and out of any direct confrontation with Russia. Speaking to the world some seven months later, he looked to bolster the resolve of the world’s leading democracies in continuing to stand behind Ukraine, even as the drawn-out conflict has upended energy markets and exacerbated inflation, creating domestic issues for leaders in London, Paris and Berlin.

At the same time, Biden is trying to ward off a potential attack on Taiwan by China. In an interview Sunday on CBS’ “60 Minutes,” Biden said he would respond militarily to any act of aggression by Beijing that violates Taiwan’s sovereignty — the kind of response he took off the table from the get-go when Russia was getting ready to invade Ukraine.

In his speech to the U.N., Biden reaffirmed that the U.S. maintains its allegiance to the One China policy that has for decades helped maintain a fragile peace across the Taiwan Strait.

He added: “But the United States will be unabashed in promoting our vision of a free, open, secure and prosperous world.”

Biden also announced an additional $2.9 billion from the U.S. to tackle food insecurity, a global crisis worsened by the war in Ukraine. He touted the just-enacted Inflation Reduction Act as evidence that the U.S. is responding to the threat of climate change and suggested that it will spur other nations and the private sector to follow suit.

After his speech, Biden held his first meeting with new British Prime Minister Liz Truss. The two leaders expressed a shared commitment to maintaining a close alliance on several fronts. Although they may have differences to resolve about the status of Northern Ireland in the aftermath of Britain’s exit from the European Union, both Biden and Truss said they would be aligned in continuing to support Ukraine amid, as Truss put it, “Russia’s appalling war.”

Biden also met with U.N. Secretary-General António Guterres on Tuesday. In remarks Monday, Guterres had implored world leaders to rally together in support of the principles enshrined in the organization’s charter, offering a bleak summation of a world where democratic principles and institutions are increasingly under attack and multilateral organizations have been unable to muster the responses necessary to combat climate change, food insecurity, diseases, human rights violations and other challenges.

“We cannot go on like this,” Guterres said. “We have a duty to act. And yet we are gridlocked in colossal global dysfunction.”

Biden delivered a somewhat more optimistic message, assuring world leaders that he remains confident that world democracies and international bodies such as the U.N. can overcome the challenges they face.

Even close allies have met that claim — a familiar Biden refrain — with some skepticism, especially given the growing political unrest and democratic instability in the United States.

At the end of his speech, Biden asked the assembled leaders to recall the circumstances of the U.N.’s founding in the aftermath of World War II. “This institution is at its core an act of dauntless hope,” he said. “We still believe that by working together we can bend the arc of history.

“We’re not passive witnesses to history,” he continued. “We are the authors of history. We can do this. We have to do it.”