Kentucky Democratic hopefuls hammer away at Bevin, not Trump 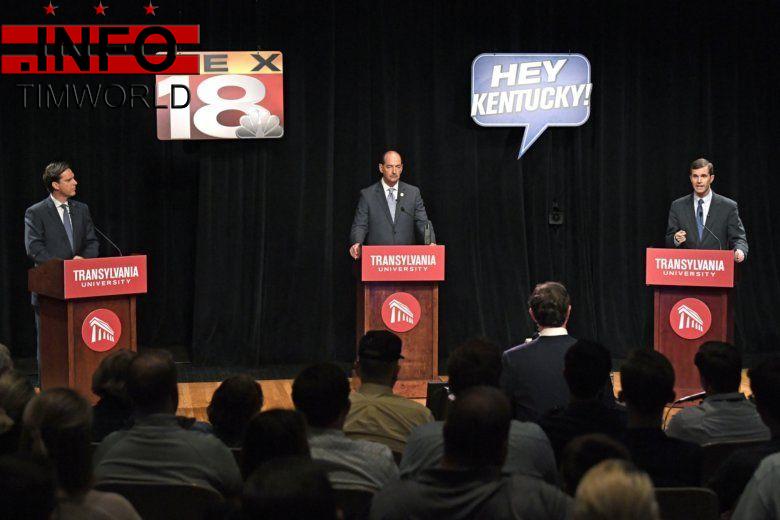 FRANKFORT, Ky. (AP) — The three leading Democrats running for Kentucky governor agree their state badly needs a new chief executive, and they’ve hit the Republican incumbent with a barrage of attacks. But they dial back the criticism when it comes to his most prominent backer, President Donald Trump.

Instead they turn to issues like gambling, solar energy and free community college to set themselves apart.

Overshadowing it all is Trump’s popularity in the bluegrass state, which could hamper the eventual Democratic nominee. Trump won Kentucky by a landslide in 2016. Bevin has tied his reelection hopes to Trump, claiming credit for Republicans for the state’s job growth and low unemployment.

Beshear, long considered the Democratic front runner, casts himself as Bevin’s main rival. He has challenged the governor’s executive actions and sued him on pension and education issues. In the highest-profile case, Beshear filed the lawsuit that led the state Supreme Court to strike down a Bevin-backed pension law on procedural grounds last year.

“We have to beat Matt Bevin … and I’m the guy with the track record for doing so,” Beshear said.

Adkins, the top-ranking Democrat in the GOP-dominated Kentucky House, points to his experience in helping craft budgets and shape legislation. He was a member of the Democratic leadership team long before Republicans took control of the chamber in 2017.

“I’ve been in the trenches a long time, having to make tough decisions,” Adkins said.

Edelen touts himself as best able to transform Kentucky’s economy. He cites his own track record and his lead role in developing a massive solar power project on a former Appalachian coal mine.

“We’ve got to have a governor who has a sense of what the future looks like and knows how to build it,” Edelen said.

Beshear started the race with one big advantage — his last name.

His father, Steve Beshear, was a popular two-term governor who guided the state through recession and expanded Kentucky’s Medicaid program. His action brought health insurance to more than 400,000 new people.

Edelen was Steve Beshear’s chief of staff during his first term as governor. But he expresses no misgivings about running against his ex-boss’ son. Asked why, he said bluntly, “Because I dislike entitlement, period.”

Edelen followed with his own ad targeting Tim Longmeyer, Beshear’s former top deputy in the attorney general’s office. Longmeyer, who previously worked in Steve Beshear’s administration, was sent to prison for orchestrating a kickback scheme. Federal authorities said neither Beshear was aware of Longmeyer’s crimes.

All three leading Democrats oppose Bevin’s efforts to require some Medicaid recipients to get a job, go to school or volunteer to keep their benefits. And they each support legalizing medical marijuana. They also defend the rights of teachers to use sick days to attend statehouse rallies.

Adkins breaks with the others on another hot-button issue. He has supported some bills to restrict abortion, while Edelen and Beshear tout their abortion-rights credentials.

“I am pro-life, and you express the views of your constituents that you represent in the legislature through your votes,” Adkins said at a debate.

The three are vying to stand out through their policy goals. Beshear wants to expand gambling in Kentucky and use the proceeds to help fund the state’s struggling public pension systems. Adkins touts free community college and job training for adults. Edelen backs decriminalizing possession of small amounts of marijuana for recreational use.

They all ridicule Bevin’s job performance but tip-toe around Trump.

At a debate, Beshear called the governor a bully but wouldn’t say the same of Trump, who has been criticized for hurling insults on his Twitter account. Asked about the Republican president’s behavior, Beshear said: “Name calling is always wrong.”

Adkins says the race should be about Bevin. Elliott County, where Adkins is from, voted for Trump in 2016, the first time it had voted for a Republican presidential candidate.

Edelen, who lost his reelection bid as state auditor in 2015 when Bevin won the governorship, calls Trump’s election a “wake-up call” for Democrats.

Democrats, he said, failed to offer an alternative as Trump rose to power.

“We didn’t speak to these folks,” Edelen said. “It’s not enough just to damn the other side, folks. We as a party have to look in the mirror.”

Adkins, long known as a moderate, believes he is best positioned to win back Republican-leaning voters.

“I’m from rural Kentucky, where we’ve been losing a lot of Democratic voters,” he said. “I think I am the type of Democrat that can bring Democrats back.”