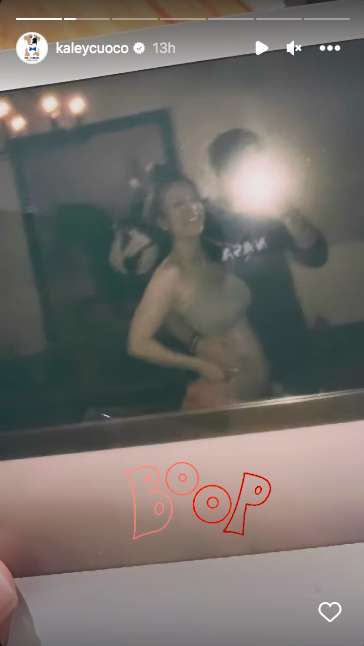 In one shot, Cuoco poses with her boyfriend, actor Tom Pelphrey for a mirror selfie in a tan crop top with his arm wrapped around her bare baby bump.

In another, Cuoco takes a solo pic, showing off her uncovered belly while lounging in a cozy sweater on the couch.

She shared a pic of herself hugging Pelphrey with a little pink bow emoji over her belly while wearing maternity overalls.

Cuoco has also been keeping active during her pregnancy. She posted a selfie with fitness instructor Amber Goppert, writing, “Thank you @ambergoppert for the super bada** prefer workouts while I’ve been OOT! You rock!”

Cuoco and Pelphrey announced they were expecting their first child, a baby girl, together earlier this month in some sweet photos.

“Baby girl Pelphrey coming 2023💕 beyond blessed and over the moon,” Cuoco wrote alongside a photo of herself and Pelphrey, 40, holding up a slice of cake with pink icing. “… I 💓you @tommypelphrey!!!”

Cuoco’s former Big Bang Theory showrunner, Chuck Lorre, recently opened up to ET about Cuoco’s baby news, saying of the actress, “She’s gonna be a helicopter mom! Gonna be all over this kid.”