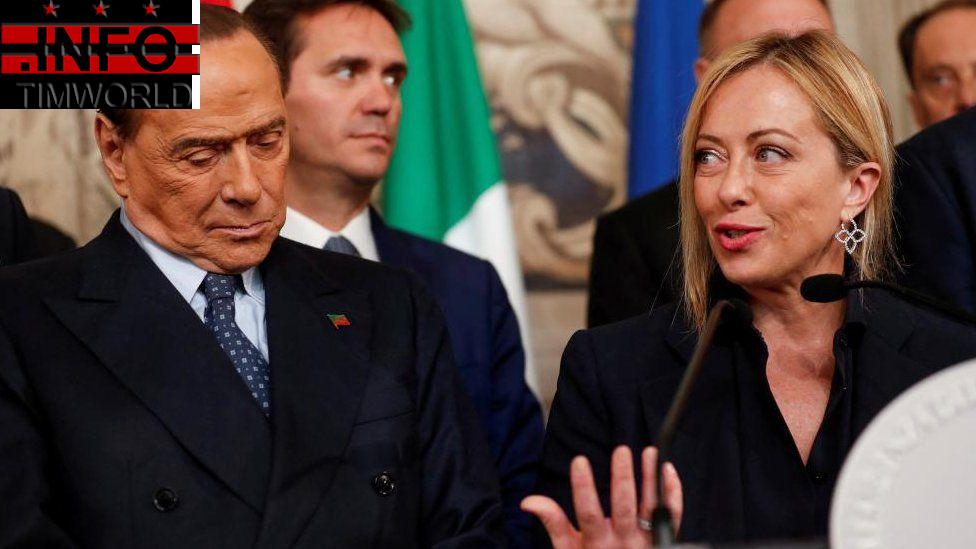 He is set to ask Ms Meloni in the coming hours to become prime minister.

Ms Meloni has sought to assure Italy’s Western allies nothing will change.

The Brothers of Italy leader could be sworn in as early as this weekend as the country’s first female prime minister – and first far-right leader since World War Two. She said her coalition of right-wing and far-right parties was unanimous that she should lead Italy.

Ahead of Friday’s 11-minute meeting, she said they were “ready to give Italy a government that confronts with awareness and competence the urgency and challenges of our time”.

Less than a month after Italians voted for a new Senate and Chamber of Deputies, she is set to replace Mario Draghi, who was due to return from an EU summit on Friday.

Alongside Ms Meloni at the presidential palace were Matteo Salvini of the far-right League and Mr Berlusconi – the 86-year-old head of centre-right Forza Italia – who for days has been at the centre of a row surrounding two leaked recordings underlining his pro-Putin views.

In the first audio leak, he was heard boasting that Russian President Vladimir Putin had sent him 20 bottles of vodka for his birthday and called him “number one among his five best friends”.

Then, in a leaked speech to party colleagues, he backed Russia’s pretext for its war, baselessly blaming Ukraine’s president and the West for pushing the Kremlin into an invasion.

He insists his remarks were taken out of context and that he backs the Italian and EU position on Ukraine. However, his pro-Putin comments are nothing new: last month he told Italian TV that Russia’s leader had merely sought to replace Volodymyr Zelensky with a “government of decent people”.

The leaks piled pressure on Giorgia Meloni, 45. Her other far-right ally, League leader Matteo Salvini, has also long been seen as a Putin admirer, but Ms Meloni needs both men in her coalition to form a majority.

Another key Berlusconi figure, Antonio Tajani, who hopes to become foreign minister in the new government, told centre-right counterparts in Brussels that his party and its leader were pro-Nato and against the “unacceptable Russian invasion of Ukraine”.

Ukrainian presidential adviser Mykhailo Podolyak said on Twitter that while Mr Berlusconi was enjoying his Russian vodka, Giorgia Meloni was demonstrating what true principles were.

Ms Meloni has already tussled over the main government jobs with Forza Italia and the League in the weeks since her nationalist, anti-immigration Brothers of Italy party won the September elections with 26% of the vote. The two smaller parties both won little more than 8%.

Mr Berlusconi’s party refused to support her pick for speaker of Italy’s Senate, Ignazio La Russa, and the centre-right leader wrote a note describing Ms Meloni as over-bearing and arrogant.

Although Ms Meloni has sought to come across as moderate, the new Senate speaker is a co-founder of her party who collects memorabilia of fascist dictator Benito Mussolini. Brothers of Italy’s own roots date back to the country’s post-war neo-fascist movement.

Mr La Russa was first to meet the president on Thursday, followed by the new speaker of the lower house, Lorenzo Fontana. The Chamber of Deputies speaker hails from the far-right League and in 2018 praised Russia’s leader as “a shining light even for us in the West”.

Assuming Ms Meloni and her new government are sworn in over the weekend, a vote of confidence next week is seen as a formality, given the size of the right-wing majority in both the Chamber and the Senate.

Her initial task will be to help Italians fund their energy costs. But she has also worried the LGBT community with attacks on the “LGBT lobby” and same-sex parenting, and she has called for a naval blockade of Libya to stop migrants crossing the Mediterranean.

Long before his war in Ukraine, Putin waged war on Russian journalists