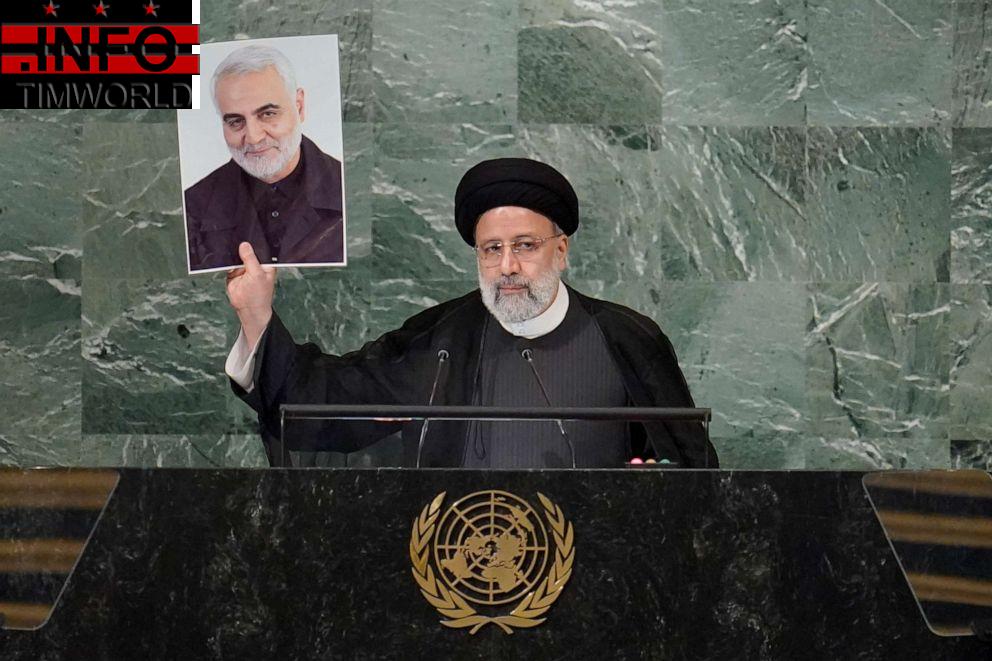 London — While Iranian President Ebrahim Raisi was holding up Gen. Qassim Soleimani’s photo on Wednesday at the United Nations General Assembly podium grieving over his killing by the U.S., Soleimani’s picture was being torn down in his home city of Kerman and set on fire by protestors.

President of Iran Ebrahim Raisi holds up a photo of slain Iranian Gen. Qassem Soleimani as he addresses the 77th session of the United Nations General Assembly, Wednesday, Sept. 21, 2022 at U.N. headquarters.Mary Altaffer/AP

Protests against the Iranian regime started across the country last Friday following the suspicious death of a young woman was arrested and detained for allegedly wearing a hijab improperly by hijab police three days earlier.

Mahsa Amini, 22, was on a trip to Tehran with her 16-year-old brother when the hijab police, also called the “morality police,” arrested her for not wearing the outfit that fully matched the Sharia-based hijab laws of the country. Despite her brother’s resistance, she was taken into custody only to be announced dead at a hospital three days later, according to the Islamic Republic News Agency.

MORE: As Iranian women are arrested for protesting against hijabs, some make ‘forced confessions,’ activist says

The head of the Forensic Medicine of Tehran said Amini was suffering from a background condition. Her father denied those claims in an interview with the BBC.

With the news of Amini’s arrest going viral, criticism against hijab laws and the confrontation of the morality police against women intensified on social media.

Iranian demonstrators taking to the streets of the capital Tehran during a protest for Mahsa Amini, days after she died in police custody in a photo obtained on Sept. 21, 2022.AFP via Getty Images

Protests soon developed beyond the morality police after her death and addressed a long list of the Islamic Republic’s actions over the past four decades.

The first big protests broke out on Sept. 17 during Amini’s funeral in Saqqez, her home city in northwest Iran.

Pictures of the burial protests went viral. The hashtag #MahsaAmini and her name in Farsi got 18 million mentions on Twitter and about 150 million on TikTok, making it the biggest trend on Persian Twitter, BBC Persian reported Thursday.

MORE: Iranian official says Salman Rushdie and his fans are to blame for attack

Amjad Amini, Mahsa Amini’s father, said Tuesday in an interview with Iranian news website Emtedad that the police did not let the family see Mahsa Amini’s body. He could only could briefly check her daughter’s legs and saw they were bruised.

“The person who hit my daughter should be put on trial in a public court,” Amjad Amini told the outlet.

Iranian demonstrators burning a rubbish bin in the capital Tehran during a protest for Mahsa Amini, days after she died in police custody, in a photo obtained on Sept. 21, 2022.AFP via Getty Images

Videos shared on social media from the protestors show many women burning their headscarves on the streets. Many celebrities have removed their hijab and shared the clips on social media.

In an act of solidarity, many men and women from different countries have also shared videos of themselves cutting their hair short and expressing their anger over Mahsa Amini’s death.

President Joe Biden said America supports the growing protests in his address to the U.N. on Wednesday.

“Today we stand with the brave citizens and women in Iran who right now are demonstrating to secure their basic rights,” Biden said.

The U.S. Department of the Treasury’s Office of Foreign Assets Control designated Iran’s morality police “for abuse and violence against Iranian women and the violation of the rights of peaceful Iranian protestors.”

“Mahsa Amini was a courageous woman whose death in Morality Police custody was yet another act of brutality by the Iranian regime’s security forces against its own people,” Secretary of the Treasury Janet L. Yellen said in a statement Thursday. “We condemn this unconscionable act in the strongest terms and call on the Iranian government to end its violence against women and its ongoing violent crackdown on free expression and assembly.”

Iranian demonstrators taketo the streets of the capital Tehran during a protest for Mahsa Amini, days after she died in police custody, in a photo obtained on Sept. 21, 2022. Protests spread to 15 cities across Iran over the death of the young woman Mahsa Amini after her arrest by the country’s morality police, according to state media.AFP via Getty Images

However, to many Iranians, western countries who negotiate with the Islamic Republic over the nuclear deal are giving the country a chance to buy time and continue its oppression, such words and moves are “too little, too late.”

“I have given up hope from the West. They have proved they only care about the nuclear program not the human rights,” Nina, a 35-year-old protestor, told ABC News. Nina did not want her real name mentioned for safety reasons.

“All I want from people in the West is not to forget us, especially now that the internet is either cut or very slow,” Nina added. “Seeing the people in the world hear and celebrities help us to be heard makes up keep up our spirit.”

Sarah, 39, a protester from Tehran, said there is a huge “mix of anger, hope and fear” in the protests. “But no matter what, we will stay on the streets,” she said.

Referring to the main slogans of the protests in different cities, “woman, life, freedom,” and “death to dictator,” Sarah, who is also not using her real name over fears for her safety, said the movement does not merely address restrictions on women.

“Slogans target the very bases of the regime. They address the leader himself calling him a ‘shame’ to the country,” she said. “What matters the most is that these slogans are heard by the world.”

While the Internet was throttled from the beginning of the protests, it was cut or severely slowed down in the country on Wednesday, according to NetBlocks. In addition, WhatsApp and Instagram –the last social media outlets that were still accessible in Iran– were filtered in an attempt by the regime to restrict the circulation of information even more severely.

“Our anger is definitely overgrowing their power,” Sarah said. “I hope people in different countries recognize this anger and their government joins them and stop negotiating with this regime.”