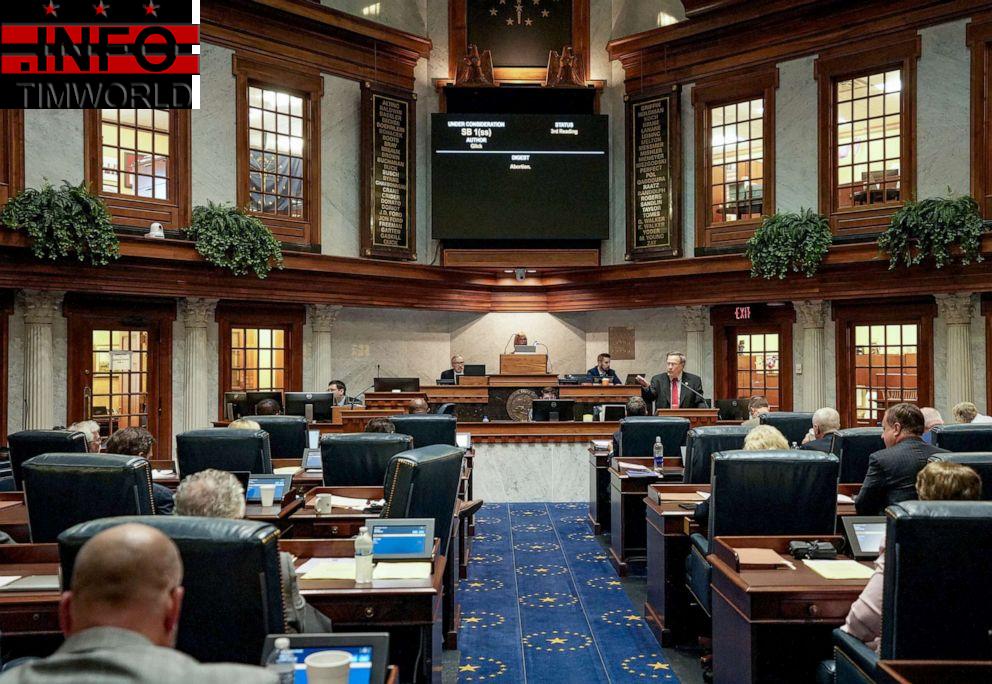 Indiana Gov. Eric Holcomb signed an abortion bill into law Friday, banning the procedure with very few exceptions, making it the first state to pass such a bill since Roe v. Wade was overturned by the Supreme Court in June. The ban will go into effect on Sept. 15.

“Following the overturning of Roe, I stated clearly that I would be willing to support legislation that made progress in protecting life. In my view, SEA 1 accomplishes this goal following its passage in both chambers of the Indiana General Assembly with a solid majority of support,” Holcomb said in a statement.

Known as SB1, the GOP-led state Senate 28-19 voted to accept the bill after it was passed by the Republican-controlled state House 62-38 earlier that day.

The bill replaces the state’s current 22-week abortion ban with a near-total ban on abortion. There are exceptions if the woman’s life is in danger and in cases of rape or incest up until 10 weeks’ gestation.

Backlash to the law came from the White House, which called it “another radical step by Republican legislators to take away women’s reproductive rights and freedom, and put personal health care decisions in the hands of politicians rather than women and their doctors.”

“Yesterday’s vote, which institutes a near-total abortion ban in Indiana, should be a signal to Americans across the country to make their voices heard,” White House press secretary Karine Jean-Pierre said in a statement Saturday. “Congress should also act immediately to pass a law restoring the protections of Roe — the only way to secure a woman’s right to choose nationally.”

Pharmaceutical company Eli Lilly, one of Indiana’s largest employers, also voiced concern over the state’s new abortion ban, saying it will force them “to plan for more employment growth outside our home state.”

“We are concerned that this law will hinder Lilly’s — and Indiana’s — ability to attract diverse scientific, engineering and business talent from around the world,” the company said in a statement Saturday. “While we have expanded our employee health plan coverage to include travel for reproductive services unavailable locally, that may not be enough for some current and potential employees.”

Under the bill, patients cannot use telehealth medicine to seek an abortion and must consult a provider in person.

This bill “makes Indiana one of the most pro-life states in the nation,” Republican Rep. Wendy McNamara, who sponsored the legislation, said at a media briefing after the House voted to pass the bill.

Earlier last week, the state senate voted on several amendments to the bill, including stripping exceptions for rape or incest.

“And what you’re telling me is if they rape the woman, we oughta kill the baby,” Young said during the debate, according to local reports. “That is not right, and I will never, ever accept that.”

However, the amendment failed to pass on a 28-18 vote, with 18 Republicans siding with the Democrats to keep rape and incest exceptions in place.

Republicans in the state house also attempted Thursday to remove exceptions for rape or incest from the bill, but it failed on a vote.

The House also changed some language from the Senate version of the bill. The Senate bill allowed abortions for rape and incest among girls 16 years and older up until eight weeks’ gestation and up until 12 weeks for those aged 15 and younger, which the House changed to 10 weeks for all victims regardless of age.

Additionally, the House removed a portion of the bill requiring rape and incest victims to sign an affidavit attesting the attack happened before being allowed to get an abortion.

Analysis of Seroprevalence in Kenya Suggests COVID-19 Virus Exposure More Extensive Than Reported
Donald Trump’s presidency: The best and worst moments from his four years as US president