In South Korea, Pelosi vows support to denuclearize the North but avoids commenting on Taiwan, China 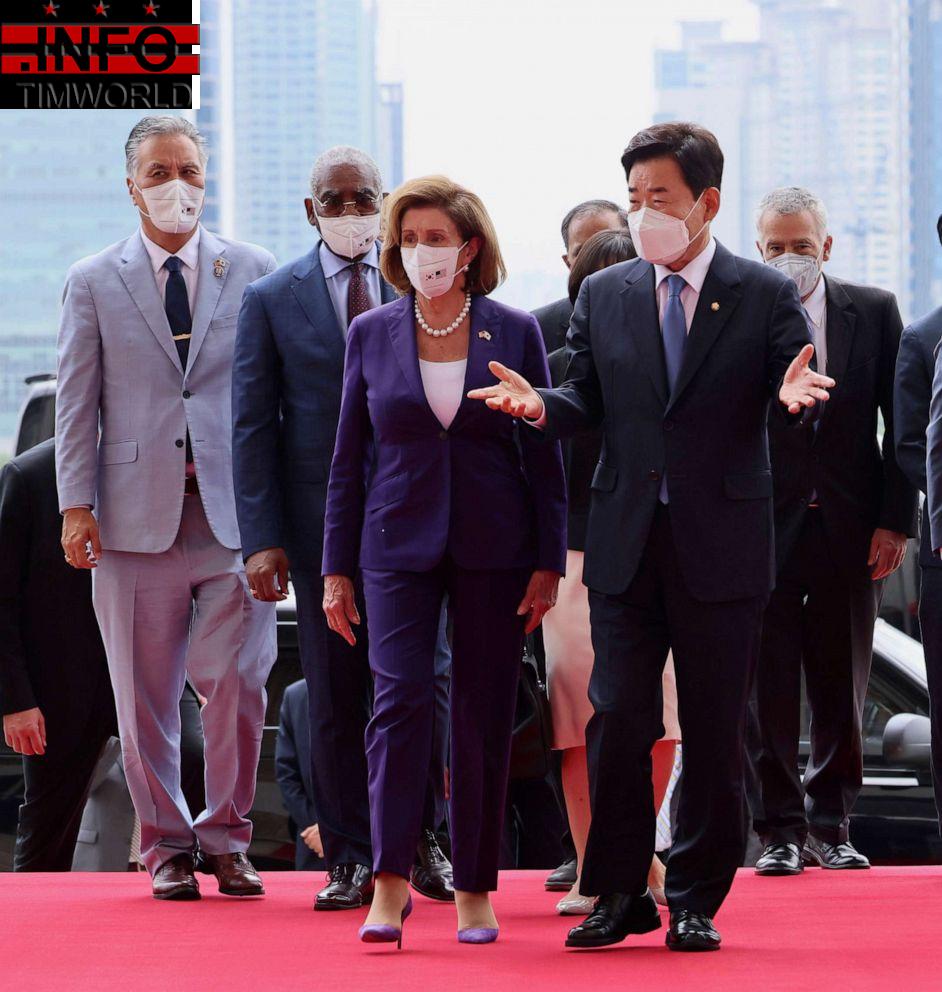 SEOUL, South Korea — U.S. House of Representatives Speaker Nancy Pelosi met with her South Korean counterpart and other political leaders in Seoul on Thursday to reassure strong ties between their two countries, but she avoided making direct public comments on her recent controversial visit to Taiwan.

South Korean National Assembly Speaker Kim Jin-pyo greeted Pelosi and other members of her congressional delegation as they arrived at the unicameral national legislature in South Korea’s capital. After an hour-long meeting, both sides reaffirmed the ironclad bilateral alliance facing a range of issues, including increasing nuclear threats from North Korea.

MORE: Pelosi says US ‘will not abandon’ Taiwan as China orders live-fire drills

“We also come to say to you that a friendship, a relationship that began from urgency and security, many years ago, has become the warmest of friendships,” Pelosi said during a joint press conference with Kim. “We want to advance security, economy and governance in the inter-parliamentary way.”

Pelosi emphasized the need to bolster inter-parliamentary cooperation between their two nations to deal with global security and economic challenges ahead. She agreed to review Kim’s proposal for Congress to work on a resolution marking next year’s 70th anniversary of the U.S.-South Korea alliance, forged on the battlefield during the 1950-53 Korean War.

Both Pelosi and Kim shared concerns about North Korea’s unprecedented number of ballistic missile tests in recent months. Reiterating the need for the international community to prepare for possibly more provocations from Pyongyang, Kim said he and Pelosi agreed to support their governments’ efforts to achieve “practical denuclearization and peace” on the Korean Peninsula based on “strong and extended deterrence” as well as diplomacy.

Neither Kim nor Pelosi took questions from reporters.

During her visit Thursday, Pelosi traveled to a border area with the North that is jointly controlled by the American-led United Nations Command and North Korea. She is the highest-level American to visit the so-called Joint Security Area since 2019, when then-U.S. President Donald Trump traveled there for a meeting with North Korean leader Kim Jong Un.

Later Thursday, Pelosi and her delegation spoke by telephone with South Korean President Yoon Suk Yeol, who is on a planned vacation this week but was accused by critics of snubbing the U.S. speaker in consideration of ties with China, South Korea’s largest trading partner.

When asked whether Yoon’s inability to meet with Pelosi in person was related to her trip to Taiwan, the South Korean president’s spokesperson, Choi Young-bum, told reporters: “Every decision was made in consideration of our national interests, and without doubt, the South Korean government respects the U.S. administration’s diplomatic decisions.”

“It is clear that our position to put the Korea-U.S. alliance at first does not change,” he added.

According to Yoon’s office, the Taiwan issue was not brought up by either side on the call.

Pelosi became the first U.S. speaker to visit Taiwan in a quarter century when she and her delegation made a surprise landing there on Tuesday night, defying repeated warnings not to from mainland China, which claims the self-governing island as its own territory.

Before departing Taipei for Seoul, Pelosi said at a press conference Wednesday that “America’s determination to preserve democracy, here in Taiwan and around the world, remains ironclad.” In response, Beijing began military exercises around Taiwan, including launching multiple ballistic missiles into the waters surrounding the island.

Pelosi and her delegation are scheduled to arrive in Japan on Thursday as the last stop in their Asia tour this week. They visited Singapore on Monday and Malaysia on Tuesday.